The History of Freemasonry and the so called Illuminati

Popular history texts and encyclopedias generally paint the so called Illuminati as having its origins in 1776 Bavaria. However, the origins go back much further. The Illuminati are tied directly through masonry to the sun and Isis cults of ancient Egypt.

The term “Illuminati” was used by one early writer, Menendez Pelayo, as early as 1492 and is attributable to a group known as the “Alumbrados” of Spain. The Alumbrados were said to receive secret knowledge from an unknown higher source, resulting in superior human intelligence. 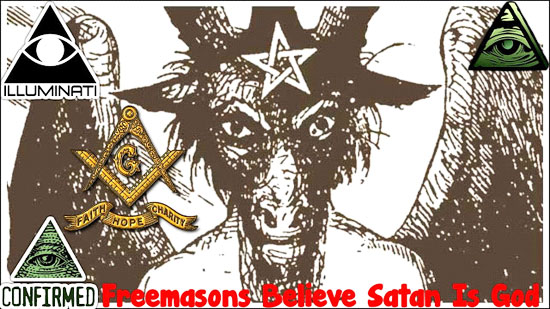 This group was condemned by an edict of the Grand Inquisition in 1623, in what was another battle in the long-running war between the catholic Church and the secret societies.

Some writers claim that a group known as the “Illumined Ones” was founded by Joachim of Floris in the XI century and taught a primitive, supposedly Christian doctrine of “poverty and equality.” This tactic to disguise Illuminism behind a thin veil of Christianity is now a well-established theme.

Later, this group is said to have become violent, plundering the rich and thereby discrediting Christianity as a whole.

Still, other writers trace the so called Illuminati to the dreaded Ishmalean sect of Islam, also known as the “Assassins”. Founded in 1090 by Hassan Sabah, this group combined the use of the drug hashish with murder as their main path to “illumination”.

Killing was an infernal experience to this branch of the “Dark mystery Schools”. They not only maintained their control by murder and threats of murder, they believed that the assassin could acquire the “gnosis”, or soul energy from the victim. This is also the theory behind the human and animal sacrifices of Satanists throughout history (and the ritual child abuse etc).

Seeking this form of dark, maleficent “illumination” was the main attraction of drugs like marijuana, hashish, and LSD to teenagers of the 1960s and the 1970s.

Witchcraft covens still meet in the nude and participate in group sex rituals for the same effect. Mass participation in animal sacrifice is another way to scavenge “gnosis” for Satanists.

Another shocking and sad fact is that although sex, drugs, dancing, and drumbeating are believed to release a lot of “gnosis”, Satanists believe that sacrifices release more of it than anything else. Such are the dark and sordid machinations of the deluded souls who think their “gnosis” accumulations and so called “illumination” will give them some form of deity or immortality.

In what may be the most beautifully composed denunciation of Masonry ever written, de Poncins wrote: “The great task of freemasonry is to spread ideas sometimes noble and beautiful in appearance but in reality destructive, of which the prototype is the famous motto: Liberty, equality, fraternity.”

Masonry, a vast organism of propaganda, acts by slow suggestion, spreading the revolutionary ferment in an insidious manner. The heads sow it among the inner lodges, these transmit it to the lower lodges whence it penetrates into the affiliated institutions and into the press, which takes in hand the public.

Tirelessly and during the necessary number of years, the suggestion works upon public opinion and fashions it to wish for the reforms from which nations die. In 1789 and 1848 [the years of the French revolutions], freemasonry, in its momentary command of power, failed in its supreme endeavor. Taught by these experiences, its progress has become slower and surer. When once the revolutionary preparation is obtained and judged sufficient, masonry leaves the field to the militant organizations, Carbonari, Bolshevists, or other open or secret societies, and retires into shadows in the background.

There it is not compromised; in case of check, it seems to have remained apart, and is all the better able to continue or take up again its work, like a gnawing worm, obscure and destroying. Masonry never works in the full light of day. Everyone knows of its existence, its meeting places and of many of its adepts, but one is ignorant of its real aims, its real means, its real leaders.

The immense majority of masons themselves are in that position. They are only the blind machinery of the sect which they serve. Many honest masons are so blind that they would be stupefied if they knew for what they are being used. 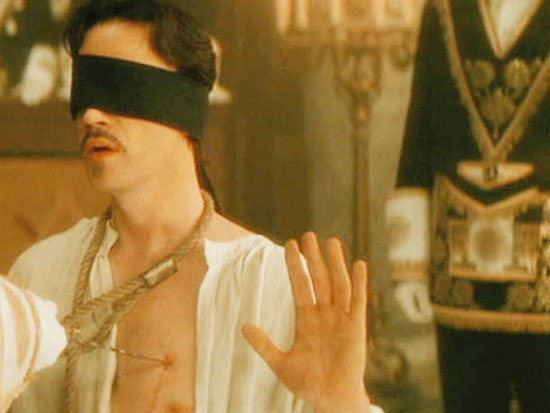 Every Mason swears to a set of oaths so ancient that a separate term has been set aside to describe them. These are called “blood oaths”. Masonry, as we know it today in America, is thought of as having thirty-third degrees, or levels. Many offshoot organizations have developed over the years that have attempted to add additional degrees above the publicly known thirty-three. Mormonism is one such offshoot.

Mormonism founder Joseph Smith, and most, if not all of his initial inner circle of supporters were Masons. He borrowed heavily from Masonic ritual for his newly-created Mormon ceremonies. With each successive degree, the Mason must swear to ever more cruel and barbarous oaths. The following details of the initiation oaths of the first three degrees of Masonry are closely guarded Masonic secrets.

In fact, every Mason musts swear to kill any fellow mason who reveals them. Fortunately for humanity, however, several brave souls in the last 200 years have felt compelled to speak out, publishing this “secret work” for the world to see. It is thanks to these courageous men that we have the exact wording and rituals of at least the first three degrees.

The personal experience of Lucifer is not often described in literature. What it was like to be Hitler living in a physical body with the incarnational Luciferian energy can only be hinted at in his biographies. The traditional Hollywood idea of fangs and claws and large “devilish” bodies is a stereotype that does not equate to the assimilation of these energies into 3rd dimensional living.

Perhaps some of Aleister Crowley’s life might hint at it in part. Alan Richardson, perhaps to some extent, manifests in his book Earth God Rising, the slow descent into what might be called Luciferianism.

All myths are in fact living energies. We have decided that much. The ones in question were ancient when the First Dynasty began around 3100 B.C. – and yet they are no age at all.

They are instead ever-becoming, like the spurting of Atum, or the column of some sparkling and infinite fountain. How to find that fountain, and when to drink from it, is something that we can spend a lifetime studying only to find (as seekers always do) that it is within us all along.

One of those figures from the realms of myth and history who was more aware of such matters then most was a certain priest from the 26th Dynasty. Now he knew all about this sort of thing, as he never ceased to tell anyone who cared to listen. Many of the people thought him insufferable because of this, but the man had absolute conviction as to his merit and his destiny, and he never ceased to prophesy. That was what he was best at.

His name was Ankh-f-n-Khonsu, which means “His heart is with Khonsu”.
Khonsu was the old Moon God from Thebes, where the mysteries functioned on a more subconscious level than elsewhere.

This Dynasty, which ran from 663 to 525 B.C.—as near as such things can be determined—saw pharaohs bearing the names Necho and Psamtik and Ahmose supporting their rule by Osirian doctrines rather than through the purely solar cults which had taken over in previous centuries.

Set — it was always Set — became the personification of darkness again; the great arts and styles of the Old Kingdom were recreated; a colossal granite temple for the Apis Bull was built at Saqqara; and the Egyptians were able to imagine for a little while that true greatness had been restored to their land.

Ankh-f-n-Khonsu, who lived a full life sometime during those reigns, was the priest who brought about the Aeon of Osiris to replace that of Isis. And, as is the way of magic, he was also the one who brought it to an end.

By Peter Farley, Excerpted from Volume 5 of Where Were You Before The Tree of Life?