If you don’t “see” what this “department” is all about and how it is in total control of everything about American life, you are either asleep or hopelessly stupid. The reality is that all DHS bureaus have the same mission – keep the government safe from potential real or imaginary threats. They label “interpret threats” meaning anyone who opposes the establishment regime, now known as the military-industrial-financial-security complex. 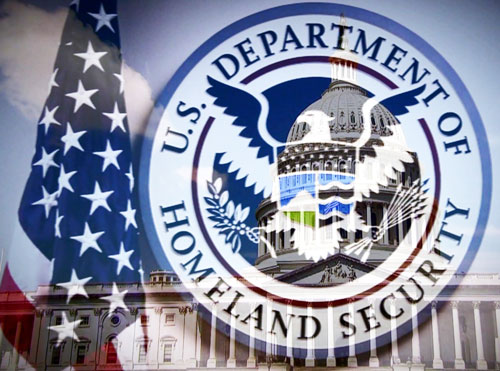 Homeland Security chronicles false threats to justify and guarantee greater state control. This bureaucratic behemoth is in the business of recruiting dredges of perverse and pathological domination that would make the “Brownshirts” proud.

When will the spirit of the 60’s resurrect the moral imperative necessary to save the American nation from the fascist elites who are intent on perfecting a US holocaust? America desperately needs protection from the Homeland Security Gestapo. Their stated mission is the essence and embodiment of domestic government terrorism.

Homeland Security in the Land of the Free

The horror stories about the Transportation Security Administration are indisputable. In the post 9/11 environment, civil liberties routinely ignored or eliminated, become a mere memory in a country that once prided itself as the beacon of freedom for the entire world. The TSA is part of the Department of Homeland Security. FEMA, the Federal Emergency Management Agency is also an agency of DHS. The public relation spin for the purpose of such authorities is to protect citizens and guard the nation. The reality is that DHS bureaus have the same mission, keep the government safe from potential real or imaginary threats.

DHS is the third largest Cabinet department after the Departments of Defense and Veterans Affairs. A Department of Homeland Security site acknowledges a FY 2012 Budget of $56.941.507.000 in the testimony of DHS Secretary Janet Napolitano before Congress:
“The Fiscal Year (FY) 2013 Budget for DHS is $58.6 billion in total budget authority, $48.7 billion in gross discretionary funding, and $39.5 billion in net discretionary funding. Net discretionary budget authority is 0.5 percent below the FY 2012 enacted level. An additional $5.5 billion for the Disaster Relief Fund (DRF) is provided under the disaster relief cap adjustment, pursuant to the Budget Control Act of 2011 (BCA).”

Secretary Napolitano defines the assignments and tasks for the DHS. The Budget builds on the progress the Department has made in each of its mission areas while also providing essential support to national and economic security.

Mission 1: Preventing Terrorism and Enhancing Security – Protecting the United States from terrorism is the cornerstone of homeland security. DHS’s counterterrorism responsibilities focus on three goals: preventing terrorist attacks, preventing the unauthorized acquisition, importation, movement, or use of chemical, biological, radiological, and nuclear materials and capabilities within the United States; and reducing the vulnerability of critical infrastructure and key resources, essential leadership, and major events to terrorist attacks and other hazards.

Mission 3: Enforcing and Administering US Immigration Laws – DHS is focused on smart and effective enforcement of U.S. immigration laws while streamlining and facilitating the legal immigration process. The Department has fundamentally reformed immigration enforcement, focusing on identifying and removing criminal aliens who pose a threat to public safety and targeting employers who knowingly and repeatedly break the law.

Mission 5: Ensuring Resilience to Disasters – DHS provides the coordinated, comprehensive Federal response in the event of a terrorist attack, natural disaster, or other large-scale emergencies while working with Federal, State, local, and private-sector partners to ensure a swift and effective recovery effort. The Department’s efforts to build a ready and resilient Nation include fostering a community-oriented approach, bolstering information sharing, improving the capability to plan, and providing grants and training to our homeland security and law enforcement partners.

The expansion of full spectrum dominance into domestic oversight and the integration of military practices and functions with local law enforcement are especially disturbing.

According to a DHS site about the security apparatus:
“Today, fusion centers throughout the country serve as focal points at the state and local level for the receipt, analysis, gathering, and sharing of threat and vulnerability-related information. In addition, the Nationwide Suspicious Activity Reporting Initiative helps to train state and local law enforcement to recognize behaviors and indicators related to terrorism, crime and other threats while standardizing how those observations are analyzed and disseminated.”

The Jesse Ventura video, the true facts about FEMA camps is so compelling that it was pulled from cable viewing. Dispelling charges of conspiracy allegations with clear evidence of enslavement preparation is too upsetting for the average media induced zombie.

As evil as it gets

Leave the denial at the door. Former Gov. Jesse Ventura and his crew on Conspiracy Theory have blown the FEMA camp issue wide open in a truly groundbreaking episode from the program’s second season on TruTV. The Police State episode proves once and for all that the feds have trained to take on American citizens, planned for riots and disasters and made preparations to maintain order at any cost.

This powerful episode is the largest and most in-depth investigation into FEMA camps to date. Radio host and filmmaker Alex Jones returns to the series yet again, as the team takes you to confirmed on-the-ground facilities, confronts the legislators who authorized FEMA camps and breaks down the full-scale technologically-integrated police state that includes Fusion Centers, FEMA, the Department of Homeland Security and more.

At one of many real and verified FEMA locations, Jesse Ventura and Alex Jones approach a “Residential Center” run by Homeland Security in central Texas where they find locked doors, double-fences and escape warnings around the entire perimeter. Further inside the facility, they witness a playground complex, swings and slides for children. The crew walks up to the front door and attempts to get some answers. But the officials refuse to either confirm or deny the facility’s purpose, including whether or not American citizens are being held inside. However, our past investigations into this facility reveal that it has confined both children and adults, including immigrants, refugee seekers and American citizens.

The government dependency society is obedient to the dictates of police authority. Fake nationalists actually are Tory subjects of a pernicious empire. Just the tip of an intrusive iceberg, the concept of an internal police state emerges as the primary real threat that faces the public. Countless examples of repression, documented in the alternative media, provide evidence that draconian measures to achieve phony internal security, is an integral component of central government subjugation.

Flying squadrons of drones for permanent surveillance does not make a country free.
America, founded on dissent, now has a timid and docile population. Two examples from history clarify this point:
During the Vietnam protest movement, flowers of peace inserted into the barrels of National Guard troops were cause for reflection. The internal strife that divided the country, based upon a bogus war, gave rise to the slogan, “Luv it or Leave it”. As the decades passed, even the most “gung ho” Rambo has come to the conclusion that the grunts were ferried in the country for the purpose of ingratiating the military-industrial-complex.

The net result of the conflict was the advancement of Communism. Not just in Southeast Asia but more significantly inside the gilded corridors of authoritarian centers of power in American government.
Do you believe that the dimwitted TSA goons would be receptive to challenges of their S&M dominating practices? 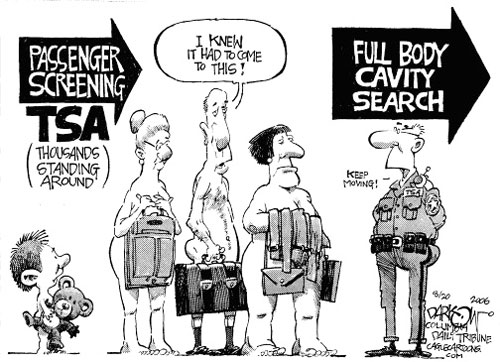 An anti-internal internment camp protest needs to spread nationwide before the trains start to roll. Where is the outrage from the public? Remember the courage of the lone Chinese dissenter standing in the path of rolling tanks in Tiananmen Square. Just short of two decades after the Kent State shootings, the world watched the Red Chinese disgraced and loss of face. Since those days, the United States proceeds in lockstep to adopt the Marxist Capitalist version of the Chinese model that operates slave communities and rewards crony comrades.

The international merging of global corporatism into a board of directors designed to abolish any remnants of individual freedom is unassailable. The shredding of the Bill of Rights goes on with little anger.
The ACLU of fifty years ago is a gutted shell of a vigorous advocate of liberty. Where are the conservatives and libertarians eager to defend Nobel Peace Prize nominee PFC Bradley Manning?
The most silent amendment to the Constitution is the third, Conditions for quarters of soldiers.
“No soldier shall, in time of peace be quartered in any house, without the consent of the owner, nor in time of war, but in a manner to be prescribed by law.”

Today’s application of Amendment III has Homeland Security effectively quartering their domestic spy warriors in the form of technological devices that gather intelligence on ordinary citizens. The physical barrier of a locked door poses little protection when the DHS Stasi invades and violates your inherent autonomy.

The recent “prescribed law” called the NDAA, National Defense Authorization Act is an offense against every American. The good news is that there is at least one constitutional federal judge, Katherine Forrest, left on the bench. The video NDAA declared unconstitutional; Indefinite detention of Americans blocked by the court provides a sliver of relief.

The Washington Times concludes:
“Section 1021 of the NDAA could have set a slippery precedent for indefinite detention of American citizens. This ruling was a milestone in the protection of 900 years of legal precedent, but the fight for due process raises frightening questions about the future of American liberty and the intentions of our representatives.”

Until Americans acquire the fortitude and will to resist and disobey unlawful edicts, the country will remain in danger of dictatorial despots. Without concerted commitment, the next dictate will include the internment in re-education facilities of Federal Judges that are insistent in upholding the Constitution.
The FEMA armored combat vehicles are ready for deployment. Remember Tiananmen Square before yet another Kent State becomes routine.