“I care not what puppet is placed on the throne of England to rule the Empire. The man who controls Britain’s money supply controls the British Empire, and I control the British money supply” – Nathan Rothschild (1777-1836).

“The truth is that the United States, under its present administration, is the tool of the British Empire – the monetary financial empire which sits like a parasite, sucking the life out of Britain from the City of London and which has never gone away” – John Yoo in an article for the National Review.

The League of Nations after WWI was seen as a failure. Nevertheless, It was the beginning of the final attempt of achieving total world domination by the British Empire and the British Crown, the NOW cover names for the rule of the world through the City of London by its masters, the Jesuits/ Rothschild dynasty. 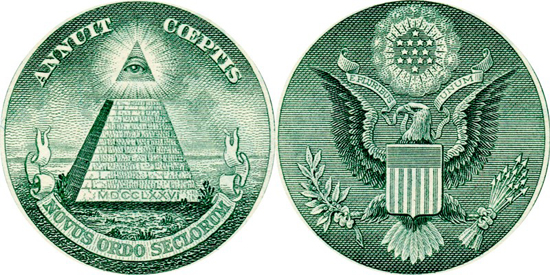 The Great Seal of the USA (presented above obverse and reverse) was a gift from Mayer Amschel Rothschild to his Masonic/Illuminati brethren in “The New World” to remind them of his and Weishaupt’s New Order – brought by Rothschild’s agent, Haym Salomon, who raised the money for the American Revolution.

The Telegraph, Aug. 18, 2014: “The United Kingdom may now be a second-rate power, but the City’s unparalleled legacy as a global financial capital still underpins its pre-eminence.”

Forbes found London and New York held a “hegemony” over the rest of the world.

Henry Makow, Oct. 4, 2014: “The New World Order is an extension of the imperialism of the ‘Crown’, a clique of Jewish bankers and their Gentile accomplices devoted to ‘absorbing the wealth of the world’ (in Cecil Rhodes words) and enslaving the human race. The first step was Wilson’s plan for the League of Nations, which we prepared for him.

We are being colonized by this financial invisible invader. The bogus War of Terror obviously is directed against us. Our jobs and resources are exported. Illegal aliens are imported. The education system is used for mass indoctrination. News is controlled. Entertainment is filled with trivia, the occult, violence and pornography.”

The London City rules the US FED and Wall Street, the rulers of the USA, the Council on Foreign Relations, the AIPAC, the ADL, the whole Jewish Lobby are servants of the Jesuits/Rothschild. The US was founded by Masons and Illuminati – who work for a united world under the British “Crown” – i.e. the Jesuit/Rothschild dynasty.

The UN is the continuation of the League of Nations woven into the Peace Treatyof Versailles after WWI. It was conceived by the British Foreign Minister, Edward Grey (1905–1916), until 1910 under King Edward VII, the Rothschild puppet, who was the son of Lionel Rothschild, and closely collaborating with Col. Edward Mandell House, Pres. Woodrow Wilson’s close adviser. Grey’s next master, King George V, himself thus a grandson of Lionel Rothschild, was also surrounded by Jewish–intermarried nobility.

The immensely wealthy private bank of N. M. Rothschild & Son controlled the British Empire then as well as now – took over the Bank of England in 1815. Then it controlled the press, the railroads and the industries, with minor exceptions. It is building the Tower of Babel in defiance of God – since their god is Lucifer.

Jesuit and Jewish Rothschild agent Colonel Edward Mandell House was the driving force behind the Federal Reserve coup d’etat in 1913, behind the Council on Foreign Relations in 1921 – and behind Pres. Woodrow Wilson’s decision to enter WWI – as well as Wilson’s chief negotiator at the Versailles Peace Negotiations.

“The Colonel House Report” aka the “Col. E. M. House letter” is a report  presented to the House of Representatives by Congressman Thorkelson of Montana, and is published in the Congressional Record of October 13, 1919, p. 598-604 inclusive. Its authenticity was discussed by members of the House and an effort was made to strike it from the Record, which failed.


No minor official would dare write such a letter to the British Prime Minister (Lloyd George), or dare discuss the important subjects contained in it; except in the line of duty. It was not written by Col. E. M. House – a nom de plume. It discloses that it was probably written by Lord Northcliffe, who was at that time the head of the British Propaganda Department in enemy countries. He sustained toward Lloyd George the same intimate relationship that once existed between Woodrow Wilson and Colonel House, and this fact may explain the name he assumed.

Lord Northcliffe aka Viscount Alfred Charles William Harmsworth was a famous journalist and publisher of the Daily Mail, The Daily Mirror, and The Times. He was Prime Minister Lloyd George’s director of propaganda – and exercised vast influence over British popular opinion. Lord Northcliffe helped Lloyd George into power – but later turned against him, when Lloyd George would not punish the defeated Germans as hard as Northcliffe wanted. Lord Northcliffe was a founder of the notorious Tavistock Institute to manipulate the British public opinion to accept war with Germany (WWI). This brainwashing octopus was funded by the British Royal family and the Rothschilds (to whom Northcliffe was said to be related by marriage) – and spread to the US – where no one gets a high public office without a Tavistock brainwashing.

This is the plan of the elite for their one-world government, the British Empire. The British Royal family is Jewish and Masonic, servants of the Jesuits/Rothschilds. 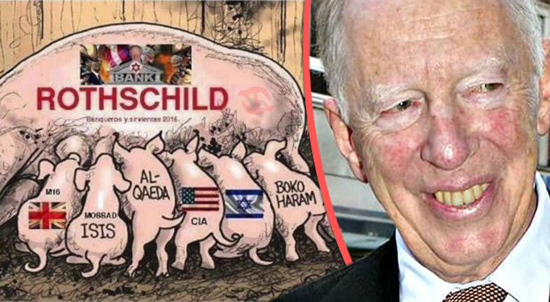 The World’s Peace Foundation has issued for us a series of League of Nations pamphlets, which, with our other literature, tax the mails to the limit of their capacity. Our film concerns are preparing an epoch-making picture entitled “The League of Nations.”

Below you can read few excerpts of the 1919 report mentioned earlier in the article.

“In brief, our entire system of thought control is working ceaselessly, tirelessly, ruthlessly, to insure the adoption of the League. And it will be adopted, for business wants peace, the righteous cannot resist a covenant, and the politicians, after shadow-boxing for patronage purposes, will yield valiantly lest the fate of the wanton and willful pursue them.”

“By these means we hope smoothly to overcome all effective opposition on the part of our colony America to entering the League — that is, the Empire. As soon as the League is functioning properly, His Majesty in response to loyal and repeated solicitation, might graciously be pleased to consent to restore to this (American) people their ancient right to petition at the foot of the throne; to confer the ancient rank and style of governor general upon our Ambassador, that this colony may enjoy a status inferior to no other colony’s.”

“Since that memorable day, September 19, 1877, on which the late Cecil Rhodes devised by will a fund ‘to and for the establishment, promotion, and development of a secret society (The Round Table) – the true aim of which and object of which shall be the extension of British rule throughout the world, and especially the ultimate recovery of the United States of America as an integral part of the British Empire’ – the energy and intelligence of England has not been spent in vain. It would perhaps be presumptuous of us to refer here to the admirable services rendered not only by Lord Northcliffe [the probable author of the report].”

“The Carnegie League to Enforce Peace and its affiliate League of Small Nations are even now leading the van in our fight. Only the last great battle remains to be fought – the battle to compel America’s acceptance of the terms of the League of Nations.

From the moment of my arrival here, it was evident to me that such an Anglo-American alliance, as would ultimately result in the peaceful return of the American Colonies to the dominion of the Crown, could be brought about only with the consent of the dominant group of the controlling clans.

For those who can afford the universities, we are, as we have already mentioned, plentifully supplying British-born or trained professors, lecturers, and presidents. British-born editors and reporters now create imperial sentiment in most American newspapers. A Canadian-born admiral now heads the United States Naval College.

Through the Red Cross, the Scout movement, the YMCA, the church, and other humane, religious, and quasi-religious organizations, we have created an atmosphere of international effort which strengthens the idea of unity of the English-speaking world. In the co-ordination of this work, Mr. Raymond Fosdick, formerly of the Rockefeller Foundation, has been especially conspicuous.”

“As the consortium for China, and the security company for Mexico show, our brokers and their aids have become the unchallenged financiers of the world. We have been particularly fortunate in our fiscal agents here, Messrs. Pierpont Morgan & Company. Lamont and Davidson gave you valuable aid at the peace conference. They loaned $200,000,000 to Japan that our ally might build a fleet to compete with America on the Pacific carrying routes. Their attempts to retain for us control of the international mercantile marine are well known to you.

Through our fiscal agents we have become the world’s purchasers. Moreover, the war has made us the custodian of the greater part of the world’s raw materials and we now largely control the oil fields of the world and thereby the world’s transportation and industry.

This control would enable us to exert such pressure as would make American industrial interests amenable to His Majesty’s pleasure. In the financial world the Anglo-American alliance is a well-established fact.”

The City of London, also known as the “Crown”, is an independent state, marking its limits by a symbol of the Devil: dragons. The world economy is ruled from here.
The report continues mentioning it:

“We must quickly act to transfer its (US) dangerous sovereignty to the custody of the Crown (City of London). We must, in short, now bring America within the Empire. The first visible step in this direction has been taken; President Wilson has accepted and sponsored the plan for a League of Nations which we prepared for him [Rothschild puppet Edward Grey –see above]. We have wrapped this plan in the peace treaty so that the world must accept from us the League or a continuance of the war. The League is in substance the Empire with America admitted on the same basis as our other colonies.

The Americans must see that far from surrendering their independence to the League, they are actually extending their sovereignty by it. Pres. Wilson alone can satisfy them on this. He alone can father an anti-Bolshevik act which judicially interpreted – will enable appropriate punitive measures to be applied to any American who may be unwise enough to assert that America must again declare her independence. And he alone, therefore, is qualified to act for us as first president of the League.”

Since the time the report was written, the entire world has been manipulated ceaselessly by the so-called Illuminati and the Freemasons, together with their acolytes, so it would become the sinister Satanic camp of human slaves for the “elite”. On the night of June 28/29, 1963, Vatican alongside with Albert Pike’s Southern Division of the Scottish Rite Freemasonry celebrated a black mass in Cappella Paolina in Vatican – making Satan the head of the Church.