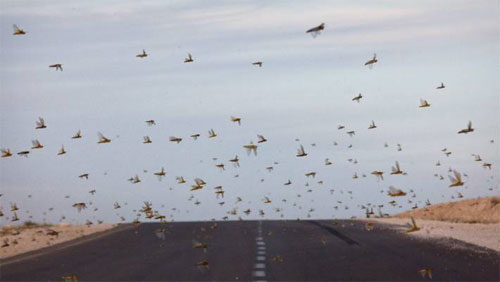 Swarms of insects, transporting genetically modified infectious viruses, attack the agricultural crops of a country and destroy its food production – this is not a science-fiction scenario, but a plan that is actually being prepared by DARPA, the Pentagon’s Defense Advanced Research Projects Agency.

Five scientists from one French and two German universities have revealed this information in Science, one of the world’s most prestigious scientific revues. In their editorial, published on October 5, 2018, they cast serious doubt on the idea that DARPA’s research, entitled “insect allies” was intended only for the use declared by the Agency – the protection of US agriculture against pathogens by using insects as the vectors of genetically modified infectious viruses. These viruses are transmitted to plants and modify their chromosomes. This capacity – as declared by the five scientists – appears to be “very limited”.

However, within the scientific milieu, the programme is “widely perceived as an effort to develop biological agents for hostile purposes and their means of delivery”, in other words “a new form of biological weapon”. This violates the Biological Weapons Convention, which came into effect in 1975, but which has remained inactive mainly due to the refusal of the USA to accept inspections of their own laboratories.

The five scientists specify that “easy simplifications could be used to generate a new class of biological weapons, weapons that would be extremely transmissible to susceptible crop species due to insect dispersion as the means of delivery”.

This scenario of an attack on agricultural cultures in Russia, China and other countries, led by the Pentagon with swarms of insects transporting the virus, is not a science-fiction fable. DARPA’s programme is not the only one to use insects as a weapon of war. The US Office of Naval Research has asked for research from Washington University in St Louis in order to transform locusts into biological drones.

Using an electrode implanted in its brain and a tiny transmitter on the insect’s back, the on-the-ground operator can decipher what the locust’s antennae are picking up. These insects have an olfactive capacity capable of instantaneously perceiving various types of chemical substances in the air – which enables the identification of stores of explosives and other sites which can be hit by air or missile attacks.

Even more frightening scenarios were mentioned in the editorial by the five scientists in Science magazine. DARPA’s programme – they emphasise – is the first programme concerning the development of genetically modified viruses which can be spread throughout the environment, and which could infect other organisms “not only in agriculture”. In other words, human beings could be listed among the organisms potentially affected by the insect-borne infectious viruses.

We know that during the Cold War, in the laboratories of the US and other nations, research on bacteria and viruses was carried out – when these agents are spread by insects (lice, flies, ticks), they can trigger epidemics in the enemy nation. Among them are the Yersinia Pestis bacteria, the cause of the bubonic plague (the terrifying Black Death of the Middle Ages) and the Ebola virus, which is both contagious and lethal.

With the techniques available today, it is possible to produce new types of pathogens, spread by insects, for which the targeted population would have no defence.

The “plagues” which in the Biblical narrative were sent by God to strike Egypt with enormous swarms of mosquitoes, flies and locusts, can today really be sent by human beings to strike the whole world. This time, we are not being warned by prophets, but by scientists who have retained their humanity.

Bad back? Ayurvedic massage can reduce chronic lower back pain