The Real Cost of the War of Terror 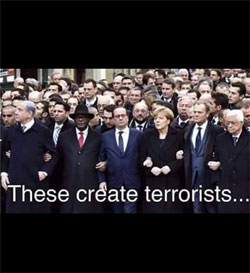 We all know by now that the real terrorists (the politicians in the suits and ties and the banksters that pull their strings) are wagging their war of terror on multiple fronts for multiple reasons.
Domestically, in the US, it rallies the population around the flag, keeping the flock in check. At the same time it justifies the build up of the police state control grid to catch the thought criminals who resist.

It also writes a blank check for the illegal wars of aggression abroad. Simply place your terrorist boogeyman in the square of the chessboard you’re looking to occupy and you’ve got yourself an excuse to invade. (Even if you “accidentally” end up supporting them, right, Uncle Sam?)

But of course the politicians, their string pullers and their fellow travelers benefit from the war of terror in a more straightforward sense. They get to use the terror scares that they themselves create to drum up billions upon billions in the name of fighting the boogeymen.

We’ve all heard of the $640 toilet seat and other ridiculous examples of Pentagon “overspending”, but these stories tend to trivialize the abuses by the military-defense contractors whose entire industry is built on providing overpriced solutions to made up problems. After all, the Pentagon itself just admitted it could cut $2 billion from its budget by shutting down some of the needless bases and defense facilities that have been built around the globe in the name of the American empire.
But $2 billion is chump change.

In the 15 years since 9/11, $1 trillion has been spent building up the police state in the American “homeland” itself.
Meanwhile, the Defense Department has been spending over $600 billion per year maintaining the American military in the post-9/11 era. $4 to $6 trillion of that was spent on the Iraq and Afghanistan wars alone, the most expensive wars in US history.

Combined defense spending, including Homeland Security, DoD, State Department, defense related debt interest and other defense costs, has reached the highest levels in modern history over the past decade. From a Cold War era high in the 1980s of $3500 for every man, woman and child in the United States to a 1990s low of $2500, that figure has since breached $4000. Just look at the chart; it isn’t hard to see exactly when the trend reversed and the good times began to flow for the military-industrial contractors. It was 9/11, the birthday of the war of terror and the new era of homeland security. 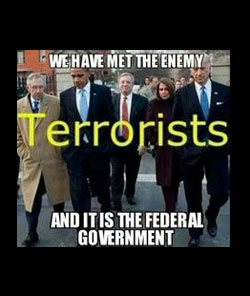 There are other numbers we could throw in here:
– The billions upon billions in military aid sent to the co-perpetrators of the war of terror, including the $38 billion that has been promised to Israel over the next 10 years.
– The $1.5 trillion joke known as the F-35 fighter jet.
– The $6.5 trillion of “year-end adjustments” in the ongoing, never-ending saga of the Pentagon’s missing trillions.

But we have to be careful not to fall into the psychopaths’ trap. The real costs of the war of terror cannot be measured in dollars and cents. They are not tallied in a ledger. They are not about money at all.

The real cost is paid in blood. The blood of a million dead Iraqis. The blood of the hundreds of thousands murdered men, women and children in Afghanistan and Pakistan. The blood that is being shed right now in Syria, in Libya, in Yemen, and in all of the countries that have crossed through the crosshairs of the NATO, American and Israeli terrorists.

It’s measured in the devastation of towns and cities that once bustled with life. In the families torn apart by drone bombings. In the havoc of the hundreds of thousands forced to flee their homes, leave their families and their homeland and their former life behind as everything they knew is torn to shreds.

It’s measured in the blood of the servicemen and women themselves. Lied to, propagandized and indoctrinated their entire lives, given a ticket out of grinding poverty by the military, shot up with experimental vaccines and shoved into the meat grinder for tour of duty after tour of duty. And then, upon returning home, left to rot in rundown hospitals and ignored by the glad-handing politicians and their military-industrial cronies as a suicide epidemic gradually thins their ranks.

This is the true cost of the war of terror, and it is incalculable. And none of it, absolutely none of it, will come to an end until the public stops believing the false narrative of the war on terror and the lies that have brought it about.

Much like Santa Claus and the Easter bunny, the real terrorists can only survive if you believe in them.