We all know its 18 years. The crimes, lying to the public, paying off fake media, first mainstream, then a few fake witnesses, planting several truckloads of phony evidence. Then the movies, passengers making phone calls from planes, hijackers with box cutters that plane passengers in a real American plane would have eaten for breakfast in minutes.

Oh, planes that didn’t get shot down, that’s how it started, followed by buildings that nothing hit, like “7” that fell anyway, fires that burned for months, molten granite steel turned to dust. Nukes. Years of lying, radiation poisoning called “toxic soup,” telling the world that drywall dust kills. Then the fakers, magic powder and ray guns took down the towers, a traveling road show of greed.

Past that, the real investigation, murders, a secret grand jury, tying it all to gangsters, Israel, Saudi Arabia and a global arms cabal, with all the names named long ago, with investigative material long leaked and buried by a very concerted effort of controlled media of all kinds and internet companies like Facebook, YouTube and of course Google.

Today all the evidence is out, nukes in the lower floors of the twin towers, small nukes inside air conditioning tanks for building 7, and FBI-CIA-White House investigation that predicted this 4 years in advance but couldn’t stop it even though records show that they followed the bombs from the Teterboro Airport in New Jersey over to the Israeli Consulate in Manhattan. Why?

The new German articles are viral, VT and everywhere, quality science, proof beyond imagination. Watch the media today, a few sites will throw a bone out there, “fires alone couldn’t have done it.” Those writing this had reams of evidence from the real investigation at their disposal and they didn’t use a word of it. Their science? Childishly fake. First the NIST then the “troofer,” a pack of traveling clowns who aren’t funny.

When we ask why they do it, the answers we get lead in one direction. Some of those who are talking “conspiracy theories” now, were around before 9/11. It keeps coming, fake shooters, real dead, pretend dead, fake gas attacks, America running ISIS and the deadly White Helmets, the truth out there, taken before the UN and the courts, but censored in the US. Everything in this matter is censorship or lie.

The material below is overwhelming: hours of lectures and dozens of detailed slides. This is not an easy read. It is another piece of irrevocable proof regarding 9/11 and the use of nuclear weapons and, on its own, worth much more than just scanning or flipping through.

Architects and engineers say planes don’t knock down skyscrapers. Nuclear physicists say only atomic bombs can turn out this kind of heat and damage. The real investigators who were silenced by a grand jury and a wealth of threats said it was a conspiracy and named lots of names, some expected, some not.

Now an independent physicist has proven the work done by the original investigators who were silenced and much new work as well. His modeling and detail is breathtaking.

We were recently introduced to the work of Germany physicist Heinz Pommer. His work deeply parallels work done by the US Department of Energy and IAEA which was censored and suppressed so that the fake 9/11 report could be published and blame put on Iraq and Afghanistan.

Unlike Pommer’s work (aided by Jeff Prager), the VT team included some of those involved in the ill fated original investigation. Working from different data, to an extent, both teams have ended up with nearly identical results.

Alternative media knows the who, how and when from official sources. Pommer (and Prager), however, have taken their portion a step further and have produced what the original team would have presented to congress and the president, had they been allowed, of the proofs of nuclear weapons and their effects. Their work is identical to the secret work by the DOE and Sandia National Labs but adds much as well.

Your mind is not your consciousness. Your consciousness is your state or quality of awareness of your existence, of being a person.
Your mind, however, can be hijacked and controlled. Your thoughts can be guided to this and that, and finally your mind might simply play the role of an uneducated dog. It barks a lot: “Be aware, intruders!”
If your mind is bent the right way (in the sense of the perpetrators of 9/11) you will accept nothing except the fairy tale of Osama bin Laden. Then your mind and your thoughts will clutch and grasp to the last straws, in order to save your world view. It will accept nothing, least of all an offending truth.

Truth, however, is important. So, let’s start this subchapter rendering homage to one great defender of the truth, Saint Augustine of Hippo.
Saint Augustine of Hippo from Numidia (a Roman province on the North African Coast) was in a certain sense an extremist, whose position could be condensed in the phrase: “Better to fall with the truth than to stand with the lie.”

He knew Rome well, as he would recognize Rome in modern western society in his splendor and cruelty. Victory at all costs. The truth does not matter, the triumph of the lie is omnipresent and masked – if at all – by the cosy word “illusion”.

To understand the essence of truth – love of God’s creation by all beings – he also studied the lie, defining how these two antipodes reveal themselves in human society.

The next pages show 25 steps in which the destruction process of the South Tower and the processes in the ground are sketched. These sketches did offend many people and were harshly criticized as “fantasy sketches”, or even as a “dangerous effort to deceive the public”.

However, these sketches should be regarded only as a playful approach in an effort to understand a physical process and to calculate a more precise model afterwards. They don’t pretend being “The Truth”. For a conscious person, there is nothing offensive in them. Even if your mind tells you so. 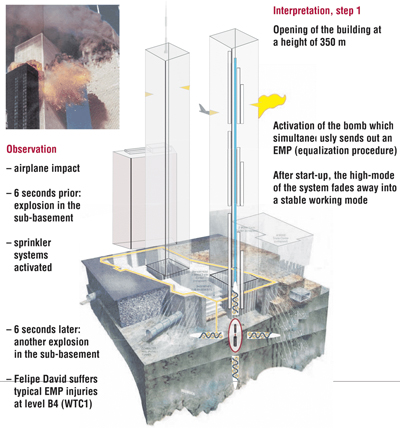 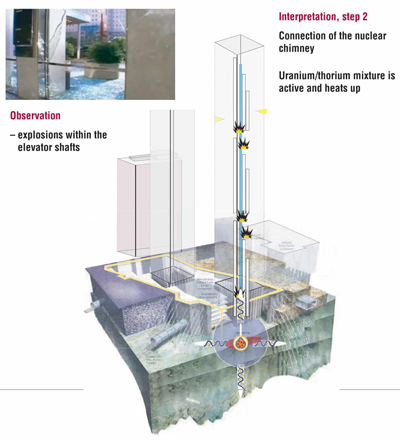 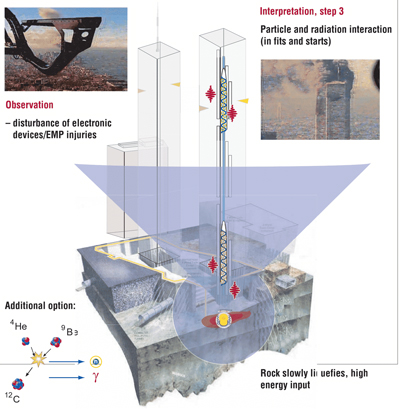 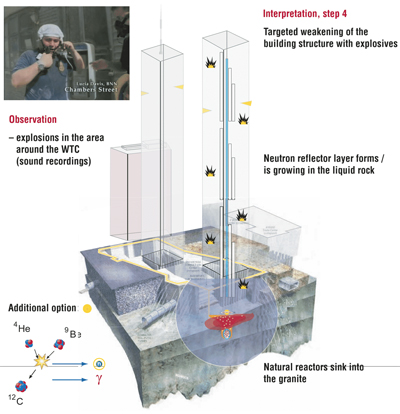 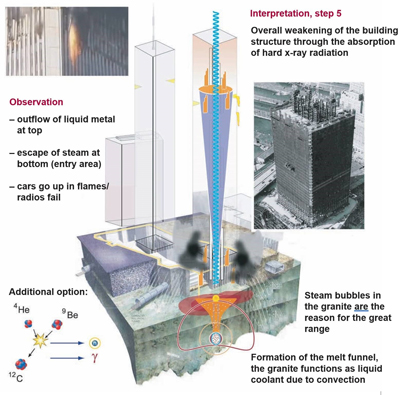 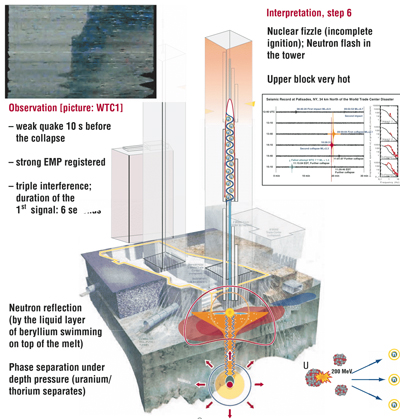 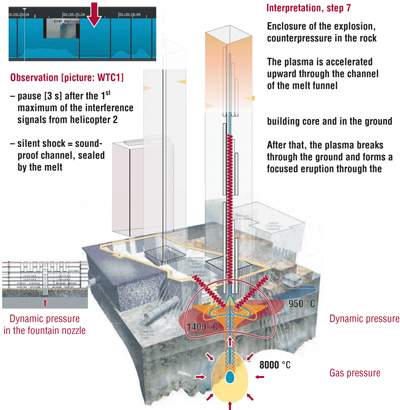 Hard Xray radiation in the Harfountain nozzle in the tower chamber 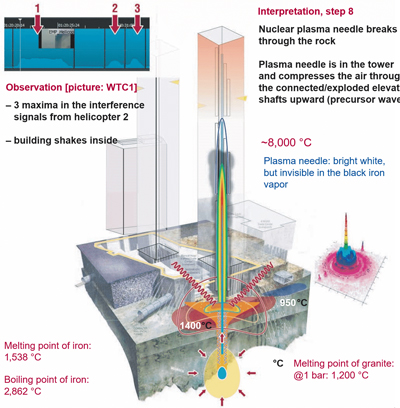 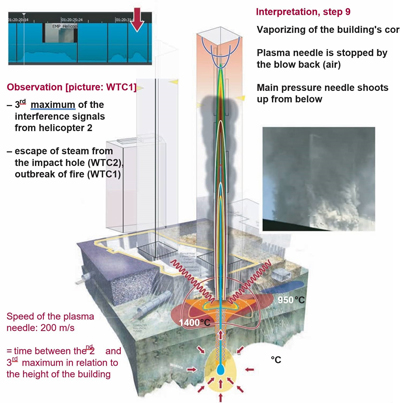 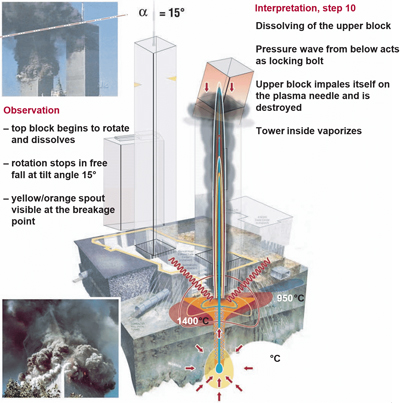 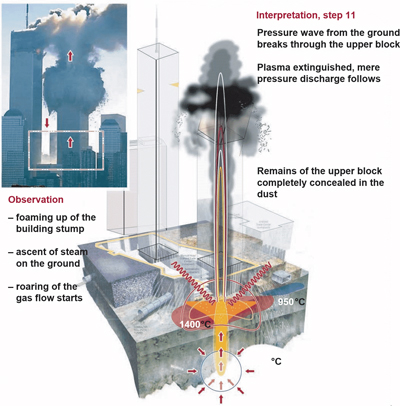 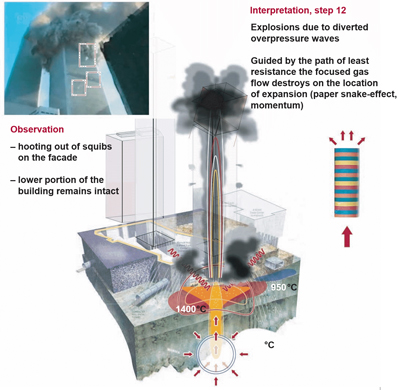 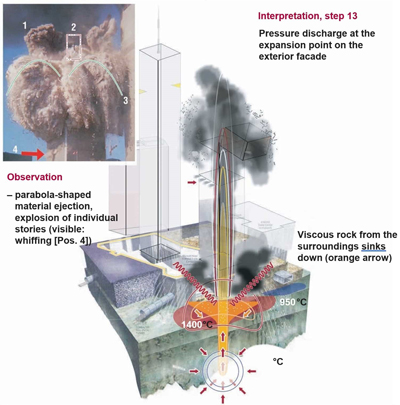 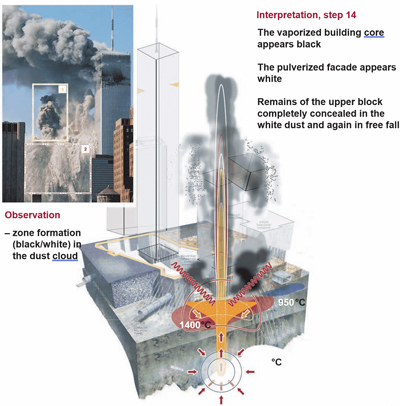 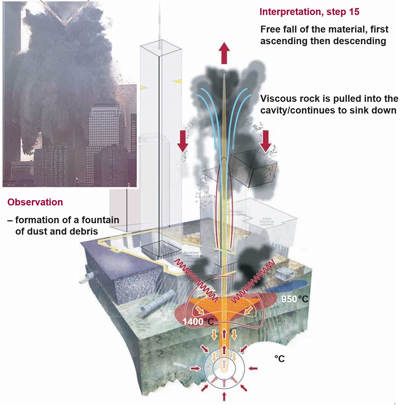 Step 16 chart is missing from the internet presentation 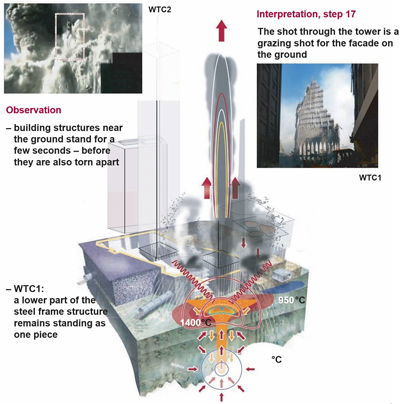 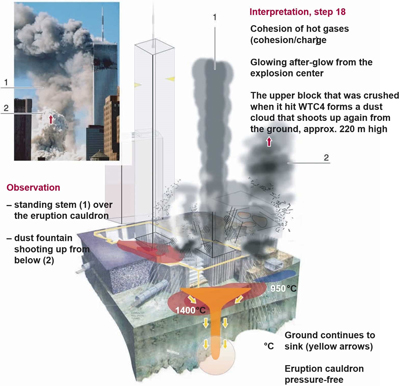 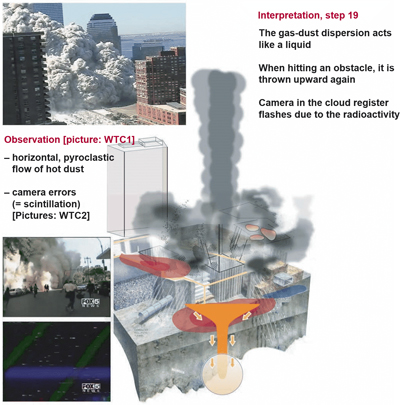 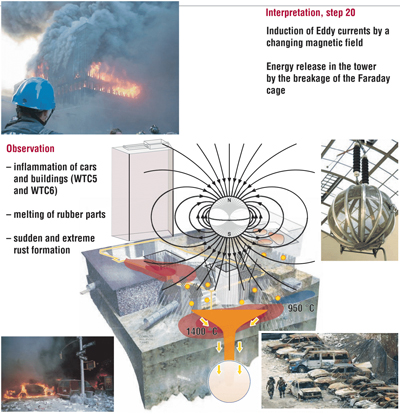 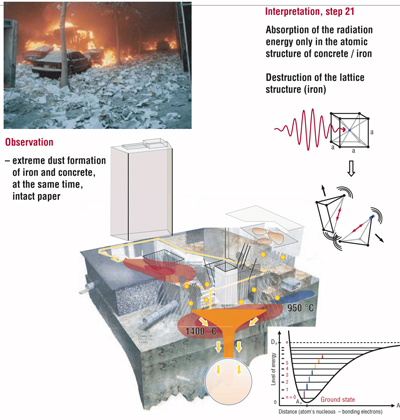 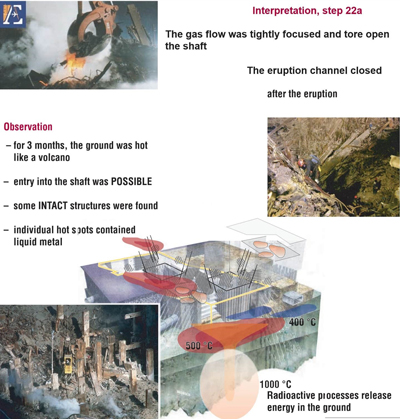 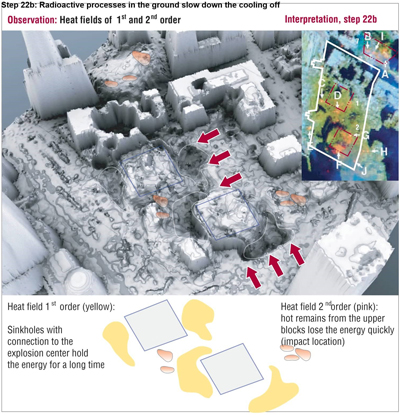 In 2015, the Congress passed and President Obama signed the reauthorization of the James Zadroga Act. It provided an additional 4.6 billion dollars in funding for its mission. 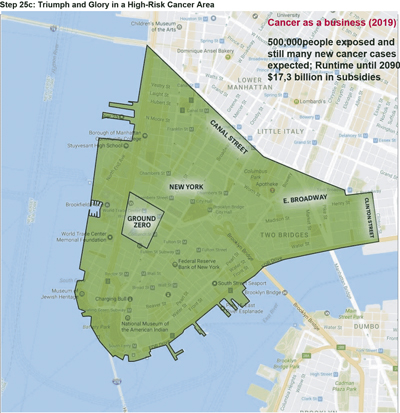 According to a Congressional Budget Office estimate, paying out the outstanding claims and future claims would cost $10.2 billion over the next decade.
The bill does not appropriate a specific amount of money to process victims’ compensation claims, instead appropriating “such sums as may be necessary for fiscal year 2019 and each fiscal year thereafter through fiscal year 2090.”