Co-Masters of the World: Connections to Secret Societies

The Rothschilds had played a major role in the Bavarian Illuminati, and it is known that a least one of the sons of Amsel was a member. As the reader remembers, Amsel placed his sons in the major European capitals, where they each set up the principal banking houses. 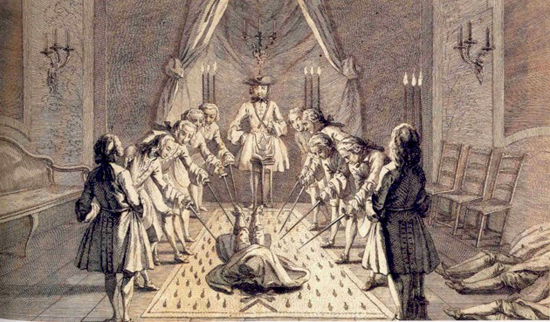 By their own secret intelligence service and their own news network they could outmaneuver any European government. The large amounts of voluminous correspondence by Rothschild couriers attracted attention, but no one ever stopped their personal intelligence and mail services.

After the Bavarian illuminati were exposed, the central occult power over the European secret societies shifted to Carbonarism a.k.a. the Alta Vendita, led by another powerful Rothschild, Karl Rothschild, son of Amschel.

In 1818, Karl participated in a secret document that was sent out to the head-quarters of Masonry from the Alta Vendita.

The Masons were quite distressed when a copy of this was lost, and offered rewards to anyone who could return the lost copy. It was originally written in Italian. Its title translates “Permanent Instructions, or Practical Code of Rules; Guide for the Heads of the Highest Grades of Masonry.”

We find the Saint-Simonians, the occult religious millenialist forerunners of communism, praising Baron de Rothschild in their magazine Le Globe:

“There is no one today who better represents the triumph of equality and work in the nineteenth century than M. le Baron de Rothschild…

Was this Jew born a millionaire? No, he was born poor, and if only you knew what genius, patience, and hard work were required to construct that European edifice called the House of Rothschild, you would admire rather than insult it.”

Lionel de Rothschild (was added by the French Rothschilds) was involved with the first communist Internationale. The Mason Mazzini who helped start communism praised Rothschild, “Rothschild could be King of France if he so desired.”

Adoiphe Cremieux, was a french Jewish Mason. The Rothschilds gave at least £ 1,000 to Cremieux to go to Damascus with Salomon Munk, and Sir Moses Montefiore to win the release of Jews imprisoned there, and to convince the Turkish Sultan to declare the charges of ritual murder false.

Carroll Quigley, professor of International Relations at the Jesuit Georgetown University, exposed the Round Table Group with his book Tragedy and Hope. The Rothschilds supported Rhodes to form De Beers.

Later, Rhodes made seven wills which established a secret society modelled after the Jesuits and Masons to help bring in a One-World-Government centered upon Britain, and the Rhodes Scholarships. The inner group was established in Mar. 1891 and consisted of Rhodes, Stead, Lord Esher (Brett), and 33 degree Mason Alfred Milner. A secondary circle of “potential members of the Circle of Initiates” consisted of the Jew Lord Balfour, Sir Harry Johnson, Lord Rothschild, Lord Grey and others. Initially, Lord Rothschild was part of the inner group of Rhode’s secret society, but was replaced by his son-in-law Lord Rosebury who wasn’t as conspicuous. The Fabian Socialists dominated the staff at Oxford when the Rhodes Scholars began arriving. These scholars then received indoctrination and preparation to become part of an international socialist New World Order.

The Round Table Group developed from the inner executive circle of Rhode’s secret society. The outer circle was established after the start of the 20th century. The Round Table Group was extended after W.W. I by organizing a front organization the Royal Institute of International Affairs. The Council of Foreign Relations was the American part of this front. The inner circle continues to direct the outer circle and its two front organizations RIIA and CFR. The CER in turn set up a number of fronts including the Institute of Pacific Relations (IPR).

Co-Masters of the World: Management of the Catholic and Czars’ Wealth and the Capture of the Orthodox Church’s Wealth

Early in the 19th century the Pope came to the Rothschilds to borrow money. The Rothschilds were very friendly with the Pope, causing one journalist to sarcastically say “Rothschild has kissed the hand of the Pope… Order has at last been re-established.”

The Rothschilds in fact over time were entrusted with the bulk of the Vatican’s wealth. The Jewish Ency., Vol. 2, p.497 states, “It is a somewhat curious sequel to the attempt to set up a Catholic competitor to the Rothschilds that at the present time (1905) the latter are the guardians of the papal treasure.” 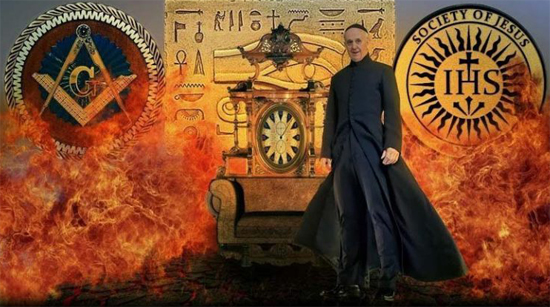 The great wealth of the Russian Czars was entrusted to the Rothschilds, $35 million with the Rothschild’s Bank of England, and $80 million in the Rothschild’s Paris bank. The Rothschilds financed the Russian Revolution which confiscated vast portions of the Orthodox Church’s wealth. They have been able to prevent (due to their power) the legitimate heirs of the Czars fortune to withdraw a penny of the millions deposited in a variety of their banks. The Mountbattans, who are related to the Rothschilds, led the court battles to prevent the claimants from withdrawing any of the fortune. In other words, the money they invested in the Russian Revolution, was not only paid back directly by the Bolshevists in millions of dollar of gold, but by grabbing the huge deposits of the Czars’ wealth, the Rothschilds gained what is now worth over $50 Billion.

Co-Masters of the World: Control Over Satanism and Witchcraft

Chapter 2.11 gives the names of a Witchcraft Council of 13 which is under Rothschild control and in turn issue orders to various groups. One of the purest form of Satanism can be traced to the Jewish Sabbatean sect and its Frankist spinoff.

Money naturally attracts itself to evil. For instance, if a woman prostitutes herself she may receive a great sum of money, but who will pay her for keeping her virginity or her dignity? If you are a hit man a large amount of money is yours if you kill your target, who will pay you if you would miss your target?

Second, evil men believe in where there is a will there is a way, and they are willing to sell their souls for their God money. They will employ evil to gain money.

While most people are quite aware of these last two connections, a third may likely have escaped their attention. Thirdly, the principle group of men who cranked up International Banking were Satanists from the beginning.

Just having total control over the supply of US paper money almost gives them leverage over the world’s finances, without mentioning they control the world bank. It is no accident then, that once they established world financial control, they would do all in their power to divide and conquer and destroy both the Christian and the Moslem faith in God.

These powerful Bankers relate to faith in God as Cain related to his brother Abel. That they may be related to the Jewish people, does not mean they have the Jewish people’s best interest at heart. Initially Sabbetai Zevi was rejected by many Jews. His sect gained momentum in second half of the seventeenth century in southeastern Poland.

In 1759-60, 500 Jewish Sabbateans “converted” to Christianity. In 1715, 109 of the 415 Jewish families in Frankfurt were engaged in moneylending. The rest were merchants of various kinds. The concepts that Satanism holds to were a natural shoe in to justify for many of these Jewish bankers the type of behavior they were engaged in.