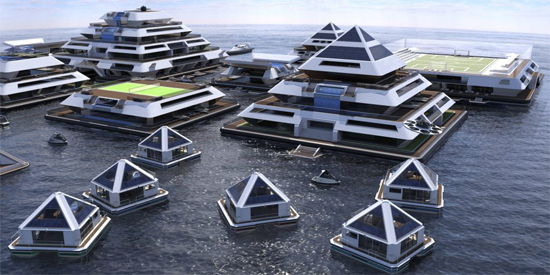 Most people are interested in what concerns the world elite. From their actions and behavior can be understood what mankind should expect in the near future. Exchanges and financial institutions react to each of their actions. One of the representatives of the world elite is the Rothschild clan.
So recently the Rothschilds made an action that makes you wonder… what could it be?

According to a news correspondent from Italy, on May 23 (2018), financial services company Rothschild & Co (financial holding company which is controlled by the French and English branches of the Rothschild family) has signed a very strange contract with the Italian designer Pierpaolo Lazzarini.
Why strange? The thing is that Pierpaolo Lazzarini developed the project Wayaland. A floating home in the form of a pyramid, deriving energy from solar panels.

Here are the details reported by the correspondent:

“Lazzarini has been trying all the time to raise funds for the implementation of his project. And now Rothschild & Co gave him such an opportunity, having ordered for himself the construction of a whole floating city.

Wayaland would consist of a group of pyramid-shaped floating buildings called Waya that are inspired by Mayan and Japanese architecture. They would come in different sizes and serve different purposes, so some may function as homes, while others could be used as greenhouses, hotels, and cinemas, for example. The largest would rise to a maximum 30 m (98 ft) tall, above the water line.

The Waya modules would be constructed from fiberglass, carbon fiber, and steel, and set atop large floating platforms with basements suitable for use as optional underwater bedrooms. The structures would be moved with motors and include a small marina for boats and other water craft to moor. Each would receive electricity from rooftop solar panel arrays and water turbines.

Smallest Waya module he will need €350,000 (about US$422,600).
According to available information, the amount of this contract exceeds $ 600 million. The number and size of the requested Waya modules are not known. Where this Wayaland will be built and floated is also kept secret. But already now it is called the future floating town of the Rothschilds.
And most importantly, everything will be built in emergency mode.”

And now we have a question: Why did such a famous clan decide to build a city for themselves on the water? Why such an urgent rush? What do they know that we do not?