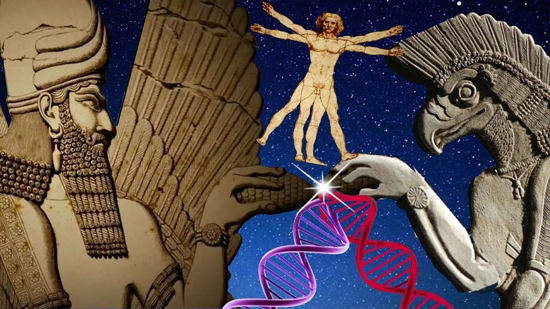 I’ve witnessed this new idea spreading and growing in the past two years or so. There are religious people who strongly believe that aliens are demons. Some aliens are indeed demons, but not in the religious sense.
Allow me to explain.
Mankind’s story actually begins back when we existed in non-physical form, on a non-physical planet, but I think it’s gonna be easier to understand if I begin the narration in the Sumerian times.

The Hidden History of Our Species

The following historical accounts were passed down to us in the form of clay tablets, from the Sumerian civilization, which sprouted some 6,000 years ago, in the historical region of southern Mesopotamia, in today’s Iraq.
The Sumerians describe in great detail how a species of Tall White “gods” came to Earth from another planet, in search of gold, a metal that they could spray as a fine dust (nanoparticles) into their atmosphere in order to repair it.
They called these “gods” the Anunnaki, which literally translated as “Those who from the heavens to Earth came”.

At first, the Anunnaki brought with them their own slaves to mine the gold, but because the work was hard and seemingly endless, the slaves took arms against their rulers. Unfortunately for everyone, most of the slaves were killed in the revolt.
The Anunnaki rulers had to come up with a solution, and decided to genetically engineer a species of slaves, by combining their DNA with that of a native primate. The new species had to be intelligent enough to operate the machines, but also stupid enough to accept the heavy duty work without revolting.

What followed was a laborious process of trial and error and it lasted for a very long period of time. During this time, numerous versions of humans have been brought into existence, and we are only the final version of those previous prototypes, the Homo Sapiens Sapiens.
It’s worth noting that we are not necessarily better than the previous versions, but we are overall better suited to serve our makers – because that is why they went through the trouble of genetically engineering us, in the first place: to use us as slaves.

For example, Homo erectus, which had more primate genes than Anunnaki genes, was better suited as a species to survive the crude conditions of our planet. They could navigate harsh landscapes without needing to cover their soles and palms for protection, climb trees and forage for food with ease, and their fur offered them protection from both the sun and the cold.
But they were not intelligent enough to operate advanced machinery, nor where they strong enough for heavy duty labor.

Probably the best overall human slave species ever created by the Anunnaki were the Homo Sapiens Neanderthalensis (the Neanderthals) and the Homo Sapiens Denisova (the Denisovans). Both species had bigger skulls and larger brains than us, which made them more intelligent. 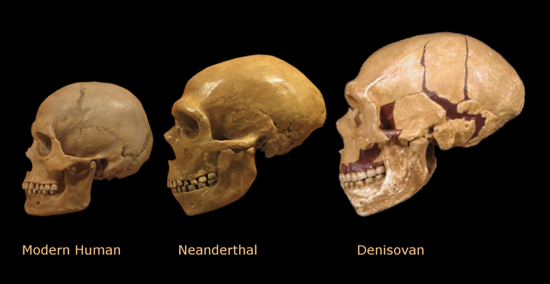 They were also better suited to live independently on Earth, being overall tougher. Their skulls were thicker and their bone density was greater. They were basically stronger and more intelligent than Homo Sapiens.

Of course, modern science can never accept this statement as true. According to Darwin’s “survival of the fittest”, the fact that we are here and the above two species are extinct can only be the result of our superiority – which was not the case.
In fact, the Neanderthals and Denisovans were most probably wiped out by their makers because they were too intelligent and too strong for their purpose as obedient slaves.

So, up until the Neanderthals and the Denisovans we can observe a continuous effort from the Anunnaki to improve their creation, and then a sudden downgrade to us, the Homo Sapiens Sapiens.
You can learn more about this in the short documentary The Anunnaki Creation Story: The Biggest Secret in Human History.

Back to the origins

As I’ve stated in the beginning of this article, mankind’s story actually begins back when we existed in non-physical form, on a non-physical planet.

The first accounts on the origins of mankind come from the “Wing Makers”, which presented themselves as a future aspect of the human species. Basically us, from the future.

According to them, the group of aliens that was later identified as the Anunnaki had indeed come to Earth in search for gold, but they first came here much-much longer than it is stated in the Sumerian tablets. Back then, the Earth was in the process of becoming solid and it was inhabited by us, as non-physical beings.
Those were the original Atlantean times, and first Atlanteans were non-physical beings.

The original Anunnaki were also non-physical and they needed gold because it modulated the frequency of their body, so it was an essence to their species. It held a property that was vital to their survival, similarly to how food is to us now.
After negotiating an agreement with the Atlanteans, they’ve started taking gold away from our planet.

In time, the Earth began to materialize more and more, basically solidifying. And the gold with it. The mining of the gold would soon become impossible for the Anunnaki, since their bodies, just like ours, were etheric, whilst the gold was turning into a dense, physical state.
So that’s when the Anunnaki asked for help from the Atlanteans, as well as other alien species to create a physical vehicle that could be used to mine for gold.

The Anunnaki had some kind of a falling out with the Atlanteans, or maybe they never really cared for them in the first place, and began to conspire with the other alien species against them.
The Anunnaki already had a human body, and only needed to power it with a life source or a soul.
Since the Atlanteans were intimately involved in the creation of this planet from the very beginning, they were naturally interested to experience life on it as solid beings. So they agreed to try on the human vehicles/ suits/ bodies.

The bodies were outstanding and performed really well, so, at first, they really enjoyed the experiment of living on Earth as physical beings, but with each new incarnation, the Anunnaki were secretly downgrading the human bodies. At the same time, with the help of the other alien species, they’ve started designing a prison for the non-physical Atlanteans.

By the time that the final version of the prison was completed, the human vehicles provided to them were only a fraction of what they’ve used to be.
These bodies were smaller, weaker, and almost entirely disconnected from the Source, which meant that they were now depended on physical food for survival. And with no knowledge of who they once were, the Atlanteans became hopelessly enslaved, both in physical and non-physical forms.
They could now be used as slaves by the aliens.

It was then decided that some of the Anunnaki should also incarnate on Earth, in order to rule over the Atlanteans, but they would use the original human bodies.
These Anunnaki presented themselves as mankind’s creators, using a made up story – the one that I have presented above – and started using us for slave labor, whilst continuously adjusting our bodies in accordance to their needs.

InfoWars’ main YouTube channel is two strikes away from being banned