The Surveillance State: An Inexorable March Toward Totalitarianism 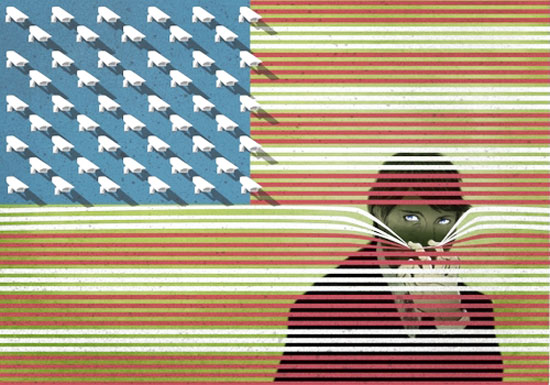 Gizmodo released an article entitled “US Homeland Security Wants Facial Recognition to Identify People in Moving Cars,” on 11/2/17 by Matt Novak. The Surveillance State has slowed down its rate of growth since the President took office, however, it has not halted that growth.

Instead, it lies festering below the veneer of daily events, inexorably growing its tentacles and extending their reach. Akin to an infestation of weeds, the roots are deep within the fabric of our communications networks: telephones, CCTV (Closed-Circuit Television) cameras, the Internet… all are thoroughly permeated.

Here is an excerpt from that article:

“The proposed program would allow Homeland Security to maintain a database of everyone who leaves and enters the US that would now include photos taken by spying robot-cameras at every border crossing. Not only does DHS want this new facial recognition program to work without anyone having to exit their vehicle, the agency wants it to work even if the travelers are wearing things like sunglasses and hats. DHS also wants it to work without cars having to stop.”

Seems they really want our information for their database. There is something more. One of the readers on the article’s website who uses the handle “Artiofab” posted this comment that is important, as he lives on the Texas border with Mexico:

“11/02/17 12:31pm Hi everybody. I live near the US-MX border so I’m happy to give informed opinions on this topic, since I know that a lot of the audience at Gizmodo dot com apparently lives closer to the US-CA border.

Near the US-MX border along major US highways there are these interior checkpoints. If you’re traveling ‘into’ the US (e.g., if you’re in New Mexico and you’re driving north) you stop your car, a USBP agent asks if you’re all US citizens, you say yes, they let you keep going.

If you’re traveling ‘towards’ Mexico, you don’t have to stop. Instead you drive past one of these.

Yes, those are cameras and lights that take images of your car as you drive past them. What does the USBP do with the images? Great question! I don’t know the answer. But I imagine that they might really like some facial recognition software to do some biometric data-gathering on anyone passing past those cameras.”

Why else would they be requiring the use of a passport starting next year on domestic flights? This is the internal passport system of the former Soviet Union, materializing before our eyes. They will not need the “Mark of the Beast” implanted or bar-coded… they have the cellular telephones.

The taxpayer slave-serfs carry these around willingly, of their own free will, to transmit their every activity and location every four seconds… events that are all recorded for future use in whatever capacity the rulers see fit.

China has been the “testing ground” ever since free trade with them was initiated along with NAFTA (George H.W. Bush created this: Clinton just signed it into law).

There is another revelatory article about the increase in surveillance technology in China. Entitled “This is What a 21st Century Police State Really Looks Like,” by Megha Rajagopalan for Buzz Feed News, released 10/17/17.

Here is an excerpt from that important article:

“For millions of people in China’s remote far west, this dystopian future is already here. China, which has already deployed the world’s most sophisticated internet censorship system, is building a surveillance state in Xinjiang, a four-hour flight from Beijing, that uses both the newest technology and human policing to keep tabs on every aspect of citizens’ daily lives.

The region is home to a Muslim ethnic minority called the Uighurs, who China has blamed for forming separatist groups and fueling terrorism.

Since this spring, thousands of Uighurs and other ethnic minorities have disappeared into so-called political education centers, apparently for offenses from using Western social media apps to studying abroad in Muslim countries, according to relatives of those detained.”

The reason the article is important is that Miss Rajagopalan was in the area for two months, accumulating firsthand interviews, reports, and photos. Here’s the big news. The Chinese have devices that allow them to scan cell phones and laptops from a distance at any time. They have biometric facial scanners they employ when stopping individuals on the street. The photos are a must-see: it shows an almost cowed populace infringed upon in every area of life.

That is the type of life coming to the United States, and soon.

In an article by the Wall Street Journal entitled, “Who Wants to Supply China’s Surveillance State? The West,” by Dan Strumpf on 11/1/17. This excerpt reveals the meaning of the article’s title:

“Companies from across the globe packed one of the world’s biggest surveillance trade shows to demonstrate the latest gizmos and algorithms powering the high-tech revolution in the industry, of which China is on the vanguard.

Tools being hawked included facial-recognition cameras, iris scanners, software that can read a subject’s mood and cameras that can scan license plates in the dark. The surveillance-equipment market in China was valued at $6.4 billion last year, according to IHS Markit.

China is a big buyer of surveillance technology as Beijing steps up its efforts to better monitor its 1.4 billion people. That is providing a boon for equipment makers, who are looking to export their gear abroad. But it has also sparked concern from rights activists about how the authoritarian government is using the souped-up Big Brother technology.”

China is the testing ground for the eventual use of this surveillance technology in the United States. An article posted on 11/6/17 shows us just how far the police state has come along toward completion. “Texas National Guard Using Cellphone Spy Tech on Surveillance Planes,” is the article’s title, by Michael Thalen of Info Wars. The Texas National Guard is using technology to mimic cell phone towers and capture locations of thousands at a time. Here is part of the article:

“The devices, purchased with drug-asset forfeiture money from Maryland-based Digital Receiver Technology Inc. (DRT), are designed to locate cellphones within a certain range by emulating a cell tower.

The specific model obtained by the Texas National Guard, known as the DRT 1301C, is even capable of intercepting and recording phone calls in real-time. A leaked U.S. government catalogue of cellphone surveillance devices obtained by The Intercept in 2015 also notes the ability of the DRT 1301C, nicknamed the «dirt box» to «locate up to 10,000 targets and can process multiple analog and digital wireless devices all at the same time.»” 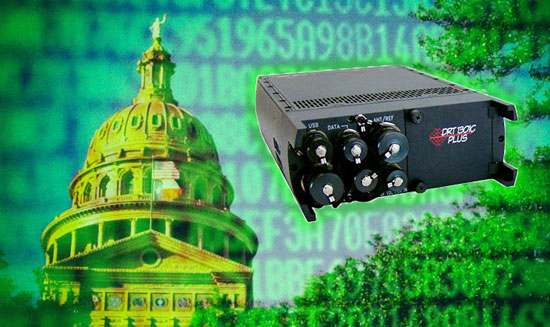 There is a large question as to whether a National Guard Unit is allowed to take on the role of a police force. That question has already been covered under legislation and executive orders passed under the Color of Law that basically has thrown the rulebook out the window.

Posse Comitatus has been supplanted by the Warner Defense Act of 2006, and the NDAA’s and accompanying Executive Orders under Obama have all but federalized both Active Duty military forces and National Guard troops in the never-ending “War on Terror.”

As can be seen with these articles, the U.S. government has a new President and a new “pitch,” but many things are not changing, or if so it is for the worse. The increasing surveillance is tightening of the noose around the necks of the American citizens.

The surveillance state is growing more powerful and thanks to legislation, is becoming more invulnerable to challenges to its supremacy. Soon its inexorable march will be irreversible. Totalitarian control will be in place, and most of the citizens are either unaware of such, or they do not care that it is so.

Feds want to track your face

The frequent-flyer program “PreCheck,” which allows for quick transit through airport security, soon could be used to gather biometrics, such as face recognition and iris scans, according to a privacy-rights group.

The Electronic Frontier Foundation notes PreCheck allows passengers to speed through airports by submitting their background information in advance.

EFF warns, however, a new plan released by the Transportation Security Administration “reveals the Department of Homeland Security’s greater underlying plan to collect face images and iris scans on a nationwide scale.”

The organization charges DHS’s programs “will become a massive violation of privacy that could serve as a gateway to the collection of biometric data to identify and track every traveler at every airport and border crossing in the country.”

While the fingerprints collected by PreCheck so far has had been used only for the mandatory background check, the scope could expand.

“This summer, TSA ran a pilot program at Atlanta’s Hartsfield-Jackson Airport and at Denver International Airport that used those prints and a contactless fingerprint reader to verify the identity of PreCheck-approved travelers at security checkpoints at both airports,” EFF said.

And the program is to roll out nationwide.

“While this latest plan is limited to the more than five million Americans who have chosen to apply for PreCheck, it appears to be part of a broader push within the Department of Homeland Security to expand its collection and use of biometrics throughout its sub-agencies,” EFF warned.

“For example, in pilot programs in Georgia and Arizona last year, Customs and Border Protection used face recognition to capture pictures of travelers boarding a flight out of the country and walking across a U.S. land border and compared those pictures to previous recorded photos from passports, visas, and ‘other DHS encounters.’”

Customs and Border Protection’s Privacy Impact Assessments for the pilot programs said that although CBP would collect face recognition images of all travelers, it would delete any data associated with U.S. citizens.

“But what began as DHS’s biometric travel screening of foreign citizens morphed, «without congressional authorization, EFF said,» into screening of U.S. citizens, too. Now the agency plans to roll out the program to other border crossings, and it says it will retain photos of U.S. citizens and lawful permanent residents for two weeks and information about their travel for 15 years. It retains data on ‘non-immigrant aliens’ for 75 years.”

There’s coordination inside Congress, too, where a proposal would require DHS to “collect biometric information from all people who exit the U.S., including U.S. and foreign citizens.”

A TSA announcement outlined how biometrics can be used at checkpoints, screening lanes, bag drop and boarding areas.

EFF said these agencies “aren’t just collecting biometrics for their own use; they are also sharing them with other agencies like the FBI and with ‘private partners’ to be used in ways that should concern travelers.”

How about facing such security at a concert or athletic event?

“We cannot overstate how big a change this will be in how the federal government regulates and tracks our movements or the huge impact this will have on privacy and on our constitutional ‘right to travel’ and right to anonymous association with others,” EFF said.

The organization pointed out that even as late as May 2017, CBP recognized that its power to verify the identification of travelers was limited to those entering or leaving the country.

“But the TSA Modernization Act would allow CBP and TSA to collect any biometrics they want from all travelers – international and domestic – wherever they are in the airport,” EFF said.

Eventually the images will find their way to FBI and DHS databases, where they will be reviewed over and over for years, posing a security risk.

“As we saw with the 2015 Office of Personnel Management data breach and the 2017 Equifax breach, no government agency or private company is capable of fully protecting your private and sensitive information.

But losing your social security or credit card numbers to fraud is nothing compared to losing your biometrics. While you can change those numbers, you can’t easily change your face,” EFF said.