The Theories of the Universe

E=mk, The Special Theory of Relativity

Energy equals mass times k. Where k is a constant defined to represent a conversion factor and completely associated with the speed of light squared in the vacuum of space.

We are constructed at the macro level of both E and m simultaneously. At the micro level, we’re all constructed of E in the form of two families of particle waves. One family, fermions (named after Enrico Fermi) exhibits the ability to cluster into atoms and when so doing contain a tremendous amount of potential energy (E=mk). The other family, bosons (named after Satyendra Bose) are the pure energy quantum that mediate fermion interactions.

Fermions and bosons are essentially “mathematical particle waves”, that is they are featureless. Any characteristic placed on them like spin and color is purely for quality reasons and is not to be confused with a 3D descriptive characteristic.

This is significant because all sub-atomic particle waves can only be described mathematically and at this level, the equations in use are completely published. The verbiage that surrounds them is used for theoretical and practical discussions. For example, the characteristic of “color” in quarks (a class of fermion) is analogous to but not the same as the RGB (red, green, blue) colors of the display screen.

A more significant characteristic and essential part of particle waves is the “probability wave”. Schrodinger’s and Pauli’s quantum mathematical equations; for example, predict through approximation the probability waves of sub-atomic interactions. These waves are often confused with ordinary 3D waves called “crowd waves”. However, particle waves are completely different and more complex (pun intended, see below).

Crowd waves are easily seen, felt, and heard. For example, drop a coin in still water and watch the wave ripple out. They are explained by a set of mathematical equations that use frequency (or wavelength) and amplitude in three dimensions. Most importantly, crowd waves are propagation waves, energy is propagated from one molecule to another as the wave travels outward from the source.

By contrast, probability waves are the probability of locating a single sub-atomic particle in space at a certain time. The probability amplitude describes the relationship between the wave function and the result of observation (Copenhagen Interpretation). The frequency of a probability wave describes its probable density in space time. These equations use complex variables (a complex variable is a number c = a + bi, where a and b are just numbers and i is the square root of negative 1) that are difficult to graph, which is why there are no visual representations easily available.

Why did the discovering group of scientists use the notion of “wave” to describe this quantum phenomenon? One reason is there are similarities when the quantum equations are simplified. For example a two dimensional graph of quantum probability correlates easily with a two dimensional graph of a crowd wave. What happens erroneously because of this is the quantum wave becomes the crowd wave to the observer and s/he associates all crowd wave characteristics to the simplified quantum wave graph. There are other similarities that also reinforce this erroneous association.

The use of the word particle is also somewhat misleading. It is more realistic to say well formed energy event occurrence at a specific point in time and space. Since fermions occupy unique points in time, it’s easier to use the word particle. Additionally, particle waves, except for photons and gluons, have mass (potential energy). Gluons are the “glue” that binds (mediates) the nucleus of an atom.

The question then is why does potential energy have mass? Where did the mass come from? Or alternatively, what is the definition of what we call mass? Enter a group of six scientists who independently formulated a different kind of potential energy and a mechanism to describe the mass that most particle waves exhibit. They theorized if the mechanism exists then there must be a particle wave that imparts mass to other particle waves. That particle wave is the Higgs boson and it is ubiquitous (fills space completely). Counter intuitively, Higgs bosons go in and out of existence. The Higgs boson reacts with every subatomic particle except photons and gluons, which is why these two bosons have no mass.

Every detailed description of the interactions of particle waves in the model called the Standard Model is actually a set of mathematical equations. The entire set of equations is a consistent approximation of the interaction phenomena. This set of equations have been verified through many experiments, some of which were done using hadron colliders (hadrons are a special group of fermions).

This theory does not include gravity (see below). Also, any other theories either ascribe no mathematical equations or the equations predict strange results for some interactions. The theories without mathematical equation sets may be convincing but remain scientifically unprovable. Since they have no basis in mathematics, they cannot be verified. This is not to imply they are invalid. For example Taoism and Buddhism have no mathematical basis and still provide convincing evidence that is consistent with the standard model.

This Special Theory of Relativity in the form of the Standard Model explains mathematically that space/time is different than what we observe. In some cases, it is beyond objective comprehension. For example, for some atoms, the electron density probability pattern looks like two spheres one on top of the other. Yet at no time is the electron in the space between the spheres. Electrons do not behave like planets around the sun; instead, they are said to effectively occupy the space described by their probability wave.

R=GE, The General Theory of Relativity 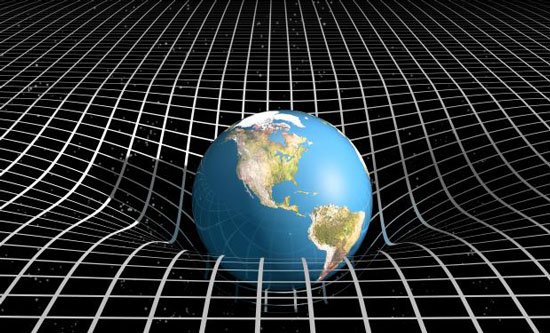 R, the distortion of space (described mathematically as a tensor) is equal to G the gravitational constant (introduced by Newton) times E, the space/time energy-momentum-density of an object (also described as a tensor). A tensor is similar to a mathematical matrix in this context. This is a simple looking complicated equation.

This mathematical equation completely defines the behavior of objects with respect to gravity. The mathematics also predicts the singularity origin of the universe (aka: Big Bang); however, it cannot predict how the universe started because it predicts that all physical theories including gravity break down at the singularity. For this reason, the General Theory of Relativity is incomplete. Also, as with Special Theory, General Theory is an approximation.

Isaac Newton through his three laws of motion proposed an equation that demonstrates gravity’s attraction nature based on the respective mass of objects and the distance between objects. This equation is accurate to a point. The General Theory of Relativity is much more precise, especially when calculating the gravitational interaction between multiple large objects (such as planets and stars).

Additional effects of these large objects interacting (for example black holes colliding) include: space/time swirling (which in turn creates gravitational waves), lensing (which creates multiple images of the same stellar group), and time dilation. Additionally, the distortion or geometry of space/time together with mass/energy creates a feedback loop. One interacts with the other and vice versa.

Gravity operates at the object level and predicts the Big Bang. As stated earlier, there is a gap in the theory. What happens at the moment of the Big Bang? When do the four forces (weak, electromagnetic, strong, and gravity) emerge from the singularity? There must be one single force from which the four were created. There appears to be a dilemma, especially since gravity only takes effect upon acceleration.

Many scientists, including Einstein were unable to solve this dilemma. Several theories were proffered including varieties of the same theory. Enter String Theory.

String theory is the leading outcropping of this dilemma. It is sometimes called the Theory of Everything (TOE) and M-Theory (because string theory mathematics uses matrix frameworks to describe quantum mechanics, similar to gravity). It attempts to unify the General Theory of Relativity with the Special Theory of Relativity. String theory introduces the concept of one-dimensional “strings”. This word was picked because the strings are said to vibrate at specific resonant frequencies. The theory states that everything is composed of these vibrating strings. String theory defines an object called a brane (short for membrane) that is a generalization of a point in multiple dimensions. This introduces several more spatial dimensions (10 or 11 and in some cases 26) that are said to be convoluted and curled-up and completely unobservable. Also, String theory expands The Standard Model to include the concept of “super symmetry”, effectively doubling the number of particle waves and subsequently causing scientists to realize that quantum physics is more complicated than originally thought. String theory, based entirely in mathematics, is a work in progress.

Today String theory works in an over simplified universe and demonstrates some promise for unification. The unification occurs if gravity exists in five dimensions while the quantum world exists in four dimensions. More importantly scientists are using the theory to resolve some previously unresolved problems in other areas of physics. For example, General Relativity describes black holes, String theory is a tool that helps investigate theoretical properties of black holes.

There are some features of String theory that are intriguing. These features include:
– Space/time is a holographic projection of the surface of the universe.

– Certain physical properties of the universe are explained just because humans exist.

– There are parallel universes.

To date, there are no theories or frameworks that actually unify gravity (General Relativity) with quantum mechanics (Special Relativity).

The Transparent Stuff of the Universe

To further complicate the universe, there are two additional concepts: dark matter and dark energy. They are more appropriately characterized as mostly non-interactive matter and energy.

Dark matter only appears within galaxies and only interacts with gravity to hold them together. Dark matter does not reflect or emit light. Dark matter is not antimatter. The latter produces gamma rays in scientific experiments; dark matter does not. Scientists calculated its effect when they discovered (through lensing) that without it galaxies would spiral outward or split apart. The leading theories surmise new exotic particle called axions, WIMPS (weakly interacting massive particles), or MACHOS (massive compact halo objects). To date, all devised experiments have failed to isolate any dark matter particles.

The universe at any scale is far more complicated and counter-intuitive than any earthly observer could have imagined. The most succinct method of description is the mathematical equation sets and they are approximations. Unification of forces at the singularity has yet to be described by science. There are mostly to completely non-interactive stuff (for lack of a more descriptive word) that makes up 95% of all matter and energy for which we know little.

The planet is influenced enough by gravity that our view of the universe until 1905 – 1915, was somewhat distorted. Our language and experiences serve as a barrier to our understanding of the actual physical universe.