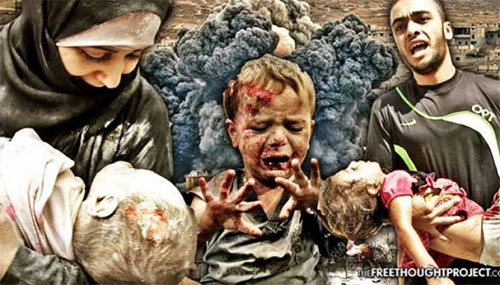 In the last 12 years, terrorist attacks in Europe have killed 459 civilians. The U.S. killed at least 472 civilians in Syria, just in June 2017.

Every time a terrorist attack occurs in Europe, it is met with an abundance of media coverage, and each victim is mourned by the public on a grand scale. However, the concern for the loss of innocent life appears to be almost nonexistent when the United States kills more civilians in one month than terrorist attacks in Europe have killed in the last 12 years.

A group monitoring the Syrian conflict reported in June that airstrikes launched by the United States-led coalition in Syria have killed 472 civilians from May 23 to June 23.
The Syrian Observatory for Human Rights reported that the provinces with the largest death tolls were Deir Ezzor with 222 civilian deaths, including 84 children, and Raqqa with 250 civilian deaths, including 53 children. The Observatory also noted that the latest figure was more than double the previous month, which was around 225 civilian deaths.

As The Free Thought Project has reported, the U.S.-led coalition entered the city of Raqqa for the first time on June 6, in the name of driving out the Islamic State. However, the first few days of the offensive resulted in reports of the coalition using a cluster of airstrikes including illegal chemicals such as white phosphorus on a city with a population of around 200,000 people.
While the U.S. claims its purpose is to defeat ISIS, its actions have been questionable. As Americans celebrated Father’s Day at the end of June, the U.S. shot down a Syrian warplane that was targeting the militants. In response, Russia announced that it is halting cooperation with the U.S. and its allies.

Just before the dramatic increase in airstrikes, a terrorist attack killed 22 people in Manchester, England, on May 22. Not surprisingly, the Islamic State was eager to take responsibility for the attack.
Secretary of Defense James Mattis used the attack to justify the increase on May 28, claiming that the U.S. had “accelerated” the tactics it was using in Iraq and Syria and is now using a policy of “annihilation”.

“Manchester’s tragic loss underscores the purpose of your years of study and training at this elite school. We must never permit murderers to define our time or warp our sense of normal. This is not normal… Our strategy right now is to accelerate the campaign against Isis. It is a threat to all civilized nations. And the bottom line is we are going to move in an accelerated and reinforced manner, throw them on their back foot. We have already shifted from attrition tactics, where we shove them from one position to another in Iraq and Syria, to annihilation tactics where we surround them. Our intention is that the foreign fighters do not survive the fight to return home to North Africa, to Europe, to America, to Asia, to Africa. We’re not going to allow them to do so. We’re going to stop them there and take apart the caliphate.”

The Manchester Attack is just one example of a loss of innocent life that has been exploited by western media and used for political gain. The loss of 22 innocent lives in England was used by the U.S. to justify going on to take nearly 500 innocent lives that have been blatantly ignored by the media.
Following the Manchester Attack, an attack near London Bridge in June killed eight civilians, bringing the total up to 30 deaths so far in 2017.

When looking at the last 12 years in Europe, terrorist attacks have taken the lives of 459 civilians. That is still less than the at least 472 civilians that were killed by the U.S. in Syria, just in the last month.