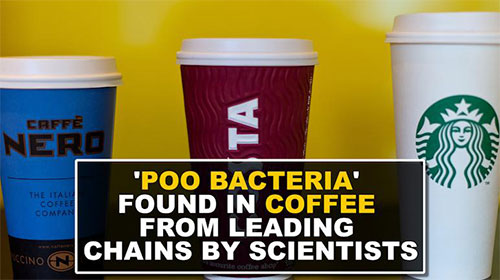 Faecal coliforms, which contain several disease-causing pathogens, can cause ear infections, dysentery, typhoid fever, viral and bacterial gastroenteritis, and hepatitis A. E. coli is a type of fecal coliform bacteria commonly found in the intestines of animals and humans.

Rob Kingsley, an expert in food-borne pathogens and a research leader at Quadram Institute Bioscience, told The Guardian the findings were alarming:
“Coliforms are an indicator of faecal contamination which means that essentially anything which is in faeces could be in that ice, meaning other, more dangerous bacteria could be present.
It is an indicator that somewhere there has been some kind of breakdown in hygiene or the source of the water used for this ice. I would certainly think twice about eating something which may contain faecal contamination at that level, where it is detectable.”

Tony Lewis, head of policy at the Chartered Institute of Environmental Health, told the BBC’s consumer-affairs “Watchdog” program the results are concerning:
“The level of contamination of faecal bacteria concerns me a great deal. The bacteria found are opportunistic pathogens and the source of human disease. These should not be present at any level, never mind the significant numbers found.”

A “disappointed” Costa Coffee reviewed its food safety procedures, updated its ice-handling guidelines, and is in the process of introducing new ice equipment storage.

Starbucks is conducting its own investigation into the claims saying the coffee chain takes hygiene “extremely seriously” and “nothing is more important than customer safety“.

A Caffè Nero spokesman asserted “a thorough investigation is now under way and the appropriate action will be taken”.

Margarita Gomez Escalada, a microbiologist and senior lecturer at Leeds Beckett University who carried out the analysis for the BBC program, admitted that other pathogens might also have been present in the ice samples, but would not have been picked up in the analysis:
“It was most likely that ice was contaminated by being touched by unclean hands, but ice machines and ice buckets might have compounded the issue if they were not properly cleaned. The fact that we have found so many bacteria, it just increases the risk [of getting sick].
Some of the bacteria we identified were actually what we call opportunistic pathogens, which are bacteria that to healthy people do not often cause disease, but they cause disease to people [whose] immunity is reduced.”

Should you think twice before you order a chilled drink at these award-winning coffee chains? Lewis says no:
“The public should not give up their iced coffees. It is not something to panic over. The companies take hygiene seriously and have taken action, and environmental health had been notified. The public should be reassured, this will have been dealt with.”