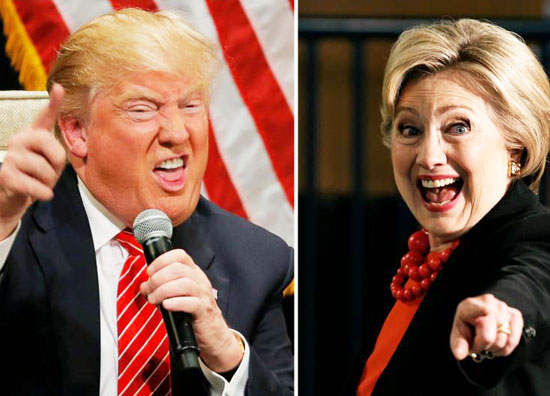 “Their stupidity is amusing.”

“Stopping Trump is essential. Anyone who says otherwise is either foolish or blinded by privilege.”

“People should get hated for voting for Johnson because he is a moron.”

“Are Trump supporters too dumb to know they’re dumb?”

“Hillbots have complete inability to do anything except parrot their hero Shillary’s endless lies.”

“Anyone who votes for Killary has already been drugged and taken the stupid pill.”

“They will never change.”

Anyone who read Facebook or pretty much any political website is sure to have seen comments like these – posted during the November 2016 US elections – that dehumanize not only the opposing candidate, but the candidate’s supporters too. This polarization and vitriol, unprecedented in our lifetime, had many Americans more concerned than the prospect of an evil candidate winning. It was as if what was really going on here was a preparation for civil war.

Dehumanization is a predecessor of war. When you see your opponents as subhuman in their morals, conscience, or intelligence, then you will have to defeat them by force. Moral or rational persuasion won’t do it. That is what the above-quoted comments imply.

The dehumanization runs top to bottom, from the headlines in major news outlets to the comments on Facebook and Twitter. Photos of political candidates chosen to provoke contempt, statements taken deliberately out of context… the no-holds-barred tactics of war. Both sides featured the most outrageous comments made by partisans of the other side, seeking to indict all of them through guilt by association. Similar to the atrocity stories used to whip up war hysteria among a pacifist public before World War One, these reports polarized the electorate and sowed paranoia and distrust.

If you read only one side, you don’t know that the other side expressed the same outraged grievances as yours does. Most Americans are probably familiar with articles about gun-toting “poll watchers” sent by Trump operatives to intimidate voters. But unless you read right-wing media, you won’t be aware of its earnest, indignant articles about agents provocateur from the Clinton camp seeking to sow violence at Trump rallies. Each side claimed the other exaggerates and misconstrues. Each side was constructing a reality in which the other was hideous.

Reading right-wing and left-wing news sites side by side, one gets the impression that reality had diverged into two. Some read both, in order to understand the sickness that has infected the country. Headline news in one camp were totally absent from the other. It wasn’t just the interpretation of the news that was different – the two sides didn’t even agree on fundamental facts. Here’s how one Facebook commentator, Amelia Bagwell, described the experience of reading a conservative friend’s news feed: “News agencies I have never heard of with bold headlines of ‘Breaking News’ announcing Hillary Clinton’s pending arrest. Trump is second to none in morality, decency and honor… loves Jesus… and is a perfect example of a godly family man. If the same stories are reported, they are akin to reading two different languages. We are divided not just ideologically, but at a core level of raw information.”

Such a gulf of perception inflamed by hatred presents a very dangerous situation.
We will not venture an opinion on whether the candidates themselves are hideous. Americans live in a system that encourages and rewards corrupt and even psychopathic behavior. What we do know, though, is that the vast majority of ordinary US citizens are not the cartoonish caricatures of human beings that political rhetoric has made them out to be. They have an experience of life, a history, a convergence of circumstances that has brought them to their opinions. Just like you.

Statements like those quoted above create a climate for extreme measures. Take them seriously, and you have to conclude that there are an awful lot of people out there who just need to be locked up. They are reprehensible, appalling… they are deplorable.

Once the name-calling starts it is self-perpetuating, since anyone who says that you are a deplorable person will seem to you deplorable themselves. How could they be so wrong about you? How could they not see your deep humanity, the good reasons you have for voting the way you do, your sincere attempts to make the world a better place? They seem just hateful.

And so, the body politic tilts further and further into extreme polarization. This will not end well, no matter which side wins.
Dehumanizing narratives are never the truth. The truth can only be sourced from the sincere question, “What is it like to be you?”
That is called compassion, and it invites skills of listening, dialog, and communicating without violence or judgment. Now there may be times when such skills fail and there is no choice but to fight. Failure is guaranteed, though, when the surrounding narrative casts the opponent as evil, twisted, disgusting, or deplorable. In that case, war is the likely result.

Can we stop creating conditions for war? Can we stop demonizing those who disagree with us? Can we stop the cheap and degrading psychoanalyzing of our opponents? These tactics might seem to succeed in the short term – one side or another will win – but in the end we have only strengthened the climate of hate and the mentality of war.

What can you do about it? See to it that you imbue everything that you post to social media, every comment, every reply, with a spirit of compassion and respect. Do not let your pain erupt forth as an implicit call to hatred. Do not beat the drums of war.

On the Duty of Civil Disobedience