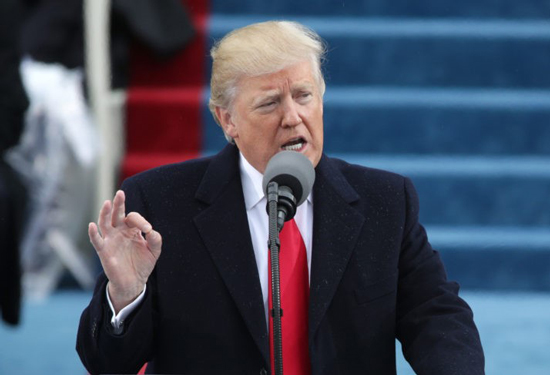 On January 20, 2017, in his inauguration speech challenging the vested interests that control political life in Washington D.C., President Donald Trump spoke of a future where humanity has full access to the kind of advanced technologies allegedly used in secret space programs. Trump appeared to be hinting at the benefits official disclosure of these programs would bring to the U.S and the world, and that he was going to challenge the vested interests hiding these.

Back in December 2016, he had told presidential historian Douglas Brinkley that he planned to write a short speech himself. Later, Trump tweeted a picture of himself working on his speech alone, thereby indicating that its content would be his own creation. 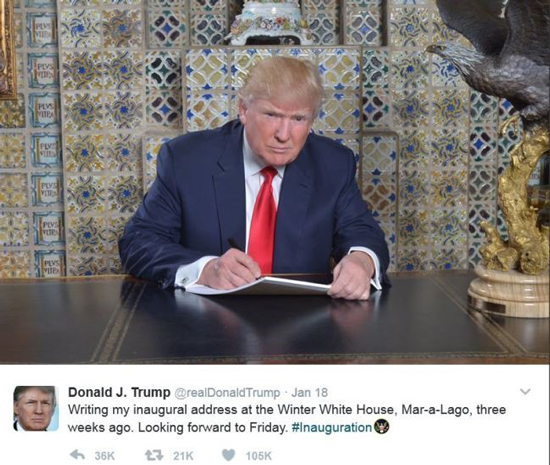 It is highly likely that Trump’s speech writers would have polished his words, and added a few rhetorical flourishes to accentuate whatever points he wanted to make in the various drafts leading to the final product. Nevertheless the contents of his Inauguration Speech reveal much of what Trump really thinks about the future and hopes to achieve during his presidency.

Early in his speech, Trump was clear that Washington politics only benefited a small wealthy elite rather than the entire population: “For too long, a small group in our nation’s capital has reaped the rewards of government while the people have borne the cost. Washington flourished, but the people did not share in its wealth. Politicians prospered, but the jobs left and the factories closed. The establishment protected itself, but not the citizens of our country. Their victories have not been your victories. Their triumphs have not been your triumphs. And while they celebrated in our nation’s capital, there was little to celebrate for struggling families all across our land.”

Trump affirmed his campaign pledge to revitalize American manufacturing industry and bringing high paying jobs back. He stated his opposition to Free Trade deals which have led to many U.S. corporations taking their manufacturing plants out of the U.S. and shipping their cheaply made foreign products back at a huge profit for a small group benefited by powerful Washington DC lobbyists: “One by one, the factories shuttered and left our shores, with not even a thought about the millions and millions of American workers that were left behind. The wealth of our middle class has been ripped from their homes and then redistributed all across the world.”

Towards the end of his speech, Trump uttered one sentence that contained his most developed vision of the future for America and its citizenry. He said: “We stand at the birth of a new millennium, ready to unlock the mysteries of space, to free the earth from the miseries of disease, and to harness the energies, industries and technologies of tomorrow.”

Trump’s use of the phrase “unlock the mysteries of space” may be just a rhetorical flourish to show his determination to rejuvenate the NASA space program and to assist the growing commercial space industry. Alternatively, it is a hint that he is aware that there is much more happening in space than the public have been informed about.

His use of the word “unlock” suggests that these mysteries are kept hidden in highly classified programs, and he now holds the keys to them. In that sense, he is sending the message that as the President and Commander in Chief, he holds all the keys and intends to use them to further his vision of the future. Once again, he was signaling his intent of confronting the “small group” hidden in Washington that benefit from keeping secrets from the public.

The next phrase used by Trump in the same sentence furthermore raises the possibility that he is aware of advanced healing technologies secretly developed in classified programs.

Witnesses and whistleblowers have described advanced healing technologies used in secret space programs that can regenerate limbs and organs, and cure any disease. For example, retired Aerospace Engineer, William Tompkins, says that from 1967 to 1971 he worked at the TRW Corporation, which had developed “life extension” pharmaceutical products that can cure any disease, and physically age-regress people.

Medical researchers such as geneticist Dr. David Sinclair, have publicly demonstrated that age-regression is not science fiction, but is scientifically feasible. He states that testing on human subjects is only a few years away, without realizing the breakthroughs achieved in classified programs going as far back as five decades.

Trump further added that he planned “to harness the energies, industries and technologies of tomorrow”. Again, was this a rhetorical flourish added by a speech writer, or was he hinting at advanced technologies used in secret space programs?
In discussing the “technologies of tomorrow” Trump appeared to be referring to more than just bringing back conventional manufacturing industries to generate new jobs. If some of the advanced technologies used in secret space programs such as antigravity and free energy were released, then this would revolutionize the automobile, aviation and energy industries. Tens of millions of jobs would be created in the U.S. alone.

Trump has promised to move quickly in achieving his campaign goals and the vision outlined in his Inauguration Speech. It appears that he has been made aware of advanced space technologies that have been kept secret from the American public, and the “small group” that benefits from this. As the newly installed Commander in Chief, he holds the keys to unlocking these secrets, and ushering in a “new millennium” through an official disclosure process that does “Make America Great Again”.

However, one year has passed since his promises to America and the world, and little has he done to make them reality. Let’s hope he didn’t already forget about them…