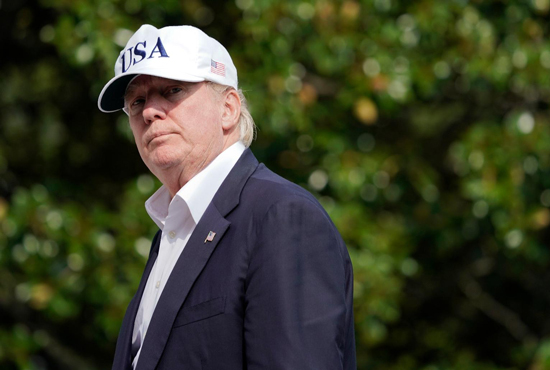 Hours before the airstrikes, Hillary Clinton said the U.S should “take out” Syrian airfields. Trump is suddenly sounding like America’s most hated neocons, John McCain and Lindsey Graham. Some think it is not coincidental that McCain had recently visited Syria. Most of the Americans who voted for Trump hoped he would end the non-stop Middle East wars carried on by Bush and Obama. Instead, he has put his foot on the accelerator.

Furthermore, mainstream media, which had been attacking Trump daily like pit bulls, before and after the election, suddenly transformed. On April 9, CNN’s anchor and commentators were speaking with hushed reverence about Trump. They declared how Trump’s airstrikes had restored America’s respect throughout the world.

Clearly the powers that be flipped a switch. Some tentatively conclude that one of the motives for the completely unproven “Russia hacked the election” claims was to pressure Trump until he acted in a way that decisively clashed with Russia.

The President said he was motivated to attack because “beautiful babies” had been murdered. Yet for two years, America’s ally, Saudi Arabia, has been bombing the civilian population of its neighbor Yemen. It has even rained down bombs (provided by the U.S. and other Western nations) on hospitals, airports, weddings and funerals. 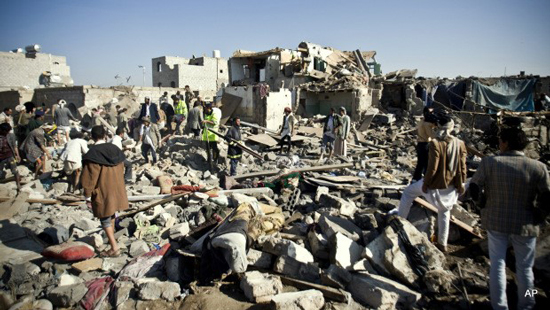 Searching for survivors in the rubble of houses destroyed by a Saudi airstrike, March 26, 2015

Even tactical nuclear weapons are apparently being dropped on Yemen.
CNN has acknowledged that millions in Yemen are in danger of starvation.

And what about the ruthless bombing of Gaza by US “ally” Israel? 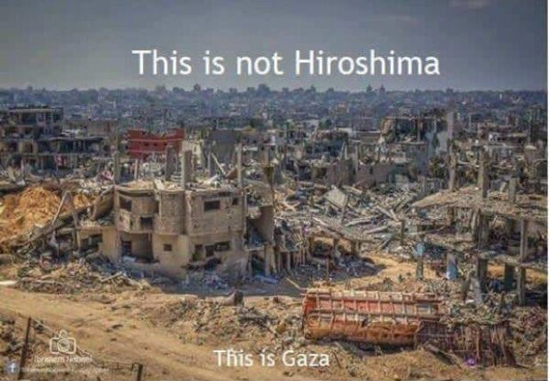 Where is Trump’s compassion for victims like these?
Israel also drops white phosphorus (a chemical weapon supplied by the US) on densely populated civilian areas, a war crime and violation of international law.

Is Trump going to bomb Saudi Arabia or Israel for their atrocities against civilians? Is he going to punish them in any way? Is he going to aid the victims? NO. Furthermore, unlike the alleged “sarin gas attack”, the atrocities in Yemen and Gaza are well-documented and have been going on for years.

Trump’s glaring double standard on human rights make it clear the April 6 missile strikes were not motivated by humanitarianism.

13. The attack has drawn America toward World War III

Syria, of course, is Russia’s ally. The more deeply Trump involves the U.S. in Syria, the greater the possibility of an incident involving a clash between American and Russian forces. Many times in history, an incident has hurtled America into full-scale war (sinking of the Maine, sinking of the Lusitania, the Tonkin Gulf incident, etc.).

Nuclear war has no winners. Trump should heed his own advice from 2013: stay out of Syria, and fix the broken USA.

The year 2017 includes a number of anniversaries with significance to the Zionist Deep State. 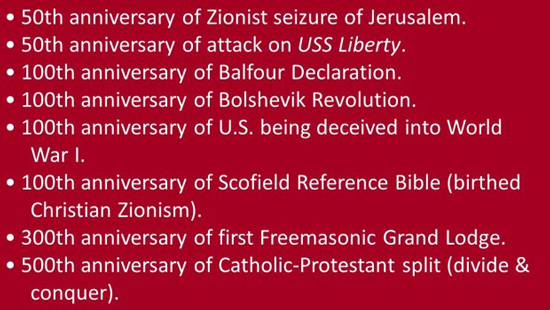 Trump’s April 6th airstrikes occurred exactly – to the day – on the 100th anniversary of America entering World War I. 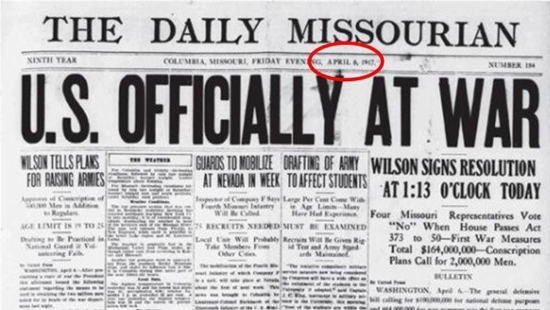 Summing up: what does this mean about the Trump Presidency?

Many Americans were hoping Trump might bring positive change. Certainly they were encouraged when he axed the TPP (Trans-Pacific Partnership), reversed Obama’s insane transgender policies, and spoke to Robert F. Kennedy Jr. about leading a vaccine task force. Perhaps Trump’s main plus was mainstream media’s relentless attacks on him.

But there were red flags too, such as his appointings like Commerce Secretary Wilbur Ross (who spent 24 years at the New York City office of N M Rothschild & Sons), and Treasury Secretary Steve Mnuchin (formerly with Goldman Sachs and Soros Fund Management). But most troubling were his long ties to Zionism:
– Trump is the only American celebrity to make an election commercial for Benjamin Netanyahu for Israeli television, and he received Netanyahu at the White House less than a month after the inauguration;
– Trump repeatedly said during his campaign that America’s allies should pay their own defense costs, yet he exempted Israel from this standard;
– It is worth watching the short video Trump’s Deck of Jewish Cards, made more than a year before the election by Jewish-born-and-raised Brother Nathanael. Two of the individuals Brother Nathanael then warned about, Jared Kushner and corporate raider Carl Icahn, are now “senior advisor” and “special advisor” to Trump;
– Ivanka Trump converted to Judaism to marry into the billionaire Kushner family; Jared has raised money for the IDF (Israel Defense Forces), fired Phillip Weiss from the New York Observer for criticizing Israeli occupations in Palestine, and Kushner’s “special assistant” Avrahm Berkowitz is first cousin to Howard Friedman, former President of AIPAC, the powerful Israeli lobbying group;
– Trump’s ambassador to Israel, David Friedman, is a pro-occupation hardliner;
– Trump has surrounded himself with numerous other Zionist Jews;
– Trump has stated he will move the U.S. embassy from Tel Aviv to Jerusalem, a major step in the Rothschild-Luciferian scheme of “building the Third Temple”;
– Trump sent a clear Zionist message at his inauguration, when his speech was immediately followed by the first-ever inaugural benediction, by an Orthodox Rabbi, Marvin Hier of the Simon Wiesenthal Centre, who quoted Psalm 137: “By the rivers of Babylon, we wept as we remembered Zion. If I forget thee, Oh Jerusalem, may my right hand forget its skill”.

In the lead-up to the bombing of Syria, we saw indications that Trump was going neocon: imposing new sanctions on Iran; the resumption of drone strikes; and sending 400 troops to Syria.

But when Trump launched those 59 cruise missiles – a very bad idea for the reasons listed above – he crossed the Rubicon. His mask is off. There is now no question that he is collaborating with the Zionist Rothschild Establishment. Yes, he said a lot of good things during the campaign. But as all we know, talk is cheap and actions speak louder than words. It took him less than three months to turn from a “Let’s fix America” populist to a full-fledged globalist neocon. 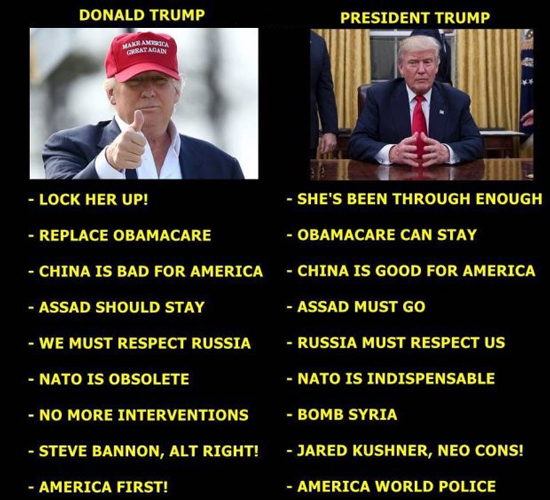 Some will argue that Trump has simply been receiving bad advice, but this explanation is refuted by Trump’s own Tweets. He knew what the right things to do were; instead, he did the opposite.

At this point, the Rothschild elite opted for Trump over Clinton – not because they disliked Clinton, but because they calculated Trump would be better able to garner assent, especially from the military and from American patriots, for continuing the unpopular Middle East wars that are aimed at the Luciferian goal of Greater Israel. Syria stands in the way of “Greater Israel” and is also despised by the Deep State for other reasons.

Apparently, since the attack on Syria, Trump has lost about half his support in alternative media. This probably reflects the fact that, speaking very generally, Trump supporters have always been in two camps. There were those of who understand there is a Deep State, that the Federal Reserve runs/ruins the economy, that most terrorist incidents are false flags, that the key architect of 9/11 was Israel (who has been playing the West and Islam against each other), and that no refugee crisis would exist if US hadn’t destabilized the Middle East through endless war. The other Trump camp consists of good people; they are sincere patriots and many are Christians, but – again speaking very generally – they are unaware of the Deep State, believe America is a true democracy, accept what the mainstream media and government tell them about terrorist events, think Middle East Wars are fought for “freedom and democracy” and believe Israel is America’s great ally. Many of these people will continue to support and make excuses for Trump’s belligerent foreign policy.

Such individuals should be warned that if Trump continues pushing the Clinton-McCain-Graham agenda of “Assad must go” it will mean the destruction of Christianity in Syria. Assad protects the churches, and is loved by Syrian Christians.
Thanks to the Syrian army’s victory in Aleppo, hundreds of Christians were able to attend their first Friday mass in five years at St. Elijah Cathedral.

Here is a clear message to Trump supporters who are Christians. The Trump administration, just like Obama’s, is supporting the Al-Nusra Front, an offshoot of Al Qaida. The White Helmets are also part of Al Qaida.
Al-Nusra, Al Qaida, the White Helmets – whichever one calls them – are working to overthrow Assad. This is a major Zionist objective, and is the reason the propaganda documentary The White Helmets was awarded an Oscar at the 2017 Academy Awards. This is why Trump’s Secretary of State, Rex Tillerson, recently repeated the “Assad must go” motto. Thus in the irony of ironies, Trump, who proclaimed himself an opponent of Islamic extremism, is supporting Al Qaida in Syria. And if Al Qaida seizes power there, Syria’s Christians will be ruthlessly slaughtered.

Zionists and Luciferians have long regarded the Eastern Orthodox Church as an archenemy. This is why the Bolsheviks tried to eradicate it in Russia, destroying 60,000 churches and murdering 300,000 priests. To comprehend the Zionist media’s feverish hostility toward Syria and her ally Russia, one has only to look at the Orthodox revival now occurring in Russia, and recognize that Syria has been a Christian bastion since the days of the Apostles. “The disciples were first called Christians in Antioch.” – Acts 11:26