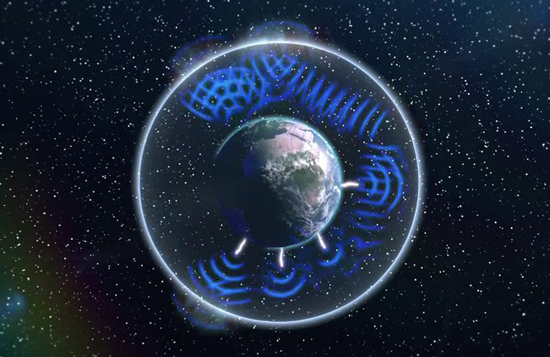 The electromagnetic field enveloping Earth is animated by extremely low acoustic frequencies called Schumann Resonances. They are generated when lightning strikes the ground, discharging kinetic energy into the cavity between Earth and its ionosphere. Like any tone produced by a musical instrument, the Schumann Resonance features a strong fundamental tone along with a number of subtler overtones.

Named after Winfried Otto Schumann, the standing wave forms were first predicted in 1952, but it took almost a decade before Charles Wagner and Martin Balser had the analytical tools to prove the accuracy of the model.

History has a strange way of repeating itself. A century prior to Earth scientists Schumann and Wagner discovering Earth’s resonant frequencies, two men of the same name were making big waves in Germany’s Romantic music scene. Today they are considered two of the most influential composers in the history of Classical music. This will be important later; for now let’s return to the Earth’s Schumann resonance.

When lightning strikes the earth it acts as a conduit for low frequency electromagnetic energy. This energy would be quickly dissipated were it not for the planet’s resonant field, which serves to amplify, distribute and sustain the signal. This lightning activity does not act alone; it tends to be accompanied by a broad range of activities in the Stratosphere and Mesosphere, called Transient Luminous Events, or TLEs.

As Below So Above

Just as the Schumann resonance is composed of Extremely Low Frequencies (ELFs), the most common types of TLEs  are called Sprites and Elves (Emissions of Light and Very Low Frequency Perturbations due to Electromagnetic Pulse Sources). The play on words reveals an underlying correlation between the archaic belief in fairies, sprites and elves, with the notion that there are sentient beings inhabiting these Transient Luminous Events. See image below. 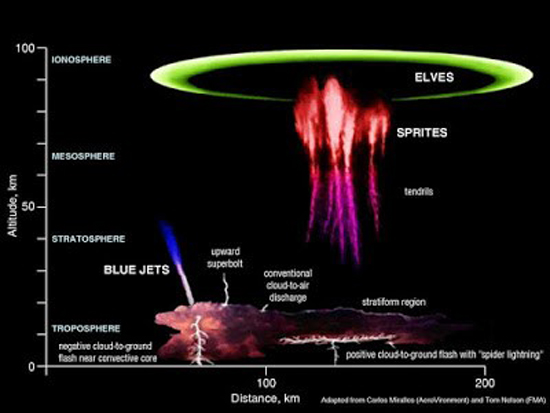 The mythology of ancient cultures were projected onto the planets and stars. If you look back in history, these same Transient Luminous Events were known as spirit candles to Welsh mariners. They were also known by the singular “St. Elmo’s Fire”, after Saint Erasmus patron saint of sailors.
As the sailors looked up into the sky and saw the auroras, they imagined a domain of Gods with powers beyond that of mankind.

The Swiss-German alchemist Paracelsus was among the most famous men to introduce the notion of sprites to science. In his cosmology, all four elements were inhabited by invisible spiritual entities. His approach to chemistry involved the concoction of medicinal brews and potions, whose beneficial attributes he attributed to both chemical structures and spiritual forces.

Paracelsus attributed Elves to the Earth element and Undines (nymphs) to the Water element. Among the vast collection of Water sprites, one finds the Greek Limnades, a creature that lived in freshwater lakes. The name’s root comes from Limnaea, daughter of the Indian river Ganges.

These water nymphs were very closely related to the Greek Sirens, a water spirit known to lure sailors off course with their beautiful songs. According to myth, when men ventured toward the islands where these siren songs came from, the boats would often capsize and the water nymphs would eat them alive.

Let’s return to the original topic of interest: planetary frequencies.

This symbol is called the Fermata, also known as the Cyclops Eye, representing a momentary pause or “hold” during a musical phrase. Viewed symbolically, it appears to correspond to the notion of Earth’s resonant cavity, which holds and sustains the Schumann Resonance frequencies. Even the shape of the symbol seems to hint at the Earth (dot) surrounded by an electromagnetic field (the arc). An expanded version of this idea is shown below, in the early Greek model of the Earth-centered universe. 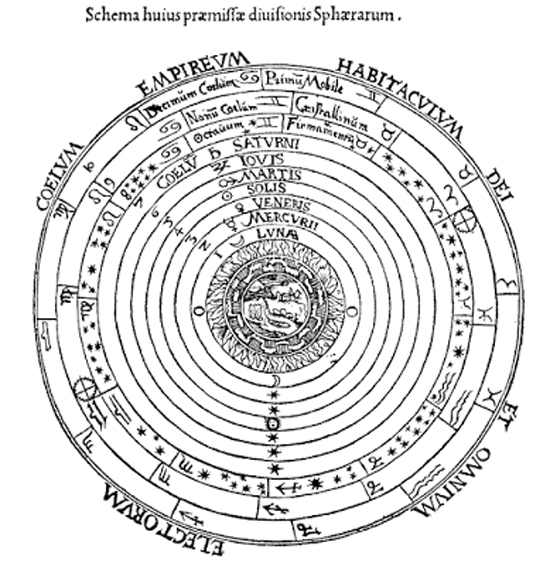 This image is called the Spindle of Necessity, taken from the Myth of Er at the end of the classic text Plato’s Republic. In this story a warrior named Er dies on the battlefield, leaves his body, and is taken through the celestial spheres where he encounters their Cosmic music. Each planetary sphere had a unique musical frequency, just like the Schumann Resonance. Together they formed the Harmony of the Spheres.

According to the myth, it was the Sirens who kept this cosmic wheel spinning. Like a record player, Earth was considered the central spindle around which the eight classical spheres turned, corresponding to the eight notes in a musical scale. So we find that the sirens were not only creatures of water but also sustainers of the musical MACROCOSMOS. 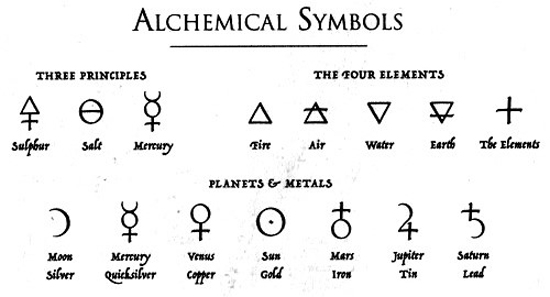 Each of these planetary tones were represented in alchemical texts by the symbols shown above. Paracelsus studied the apparent influence of planetary activity upon his chemistry experiments. Just as the four elements were inhabited by sprites, so too were the planetary spirits embodied in matter via the precious metals. Among the most important principle was Mercury, which functioned as both a planetary metal and a principle of the Trinity.

So at last we return to Robert Schumann, the German Romantic composer of the mid-19th century. Known for his prolific output, records show that Schumann suffered from extreme auditory hallucinations during the later part of his life, claiming that he would hear entire symphonies in his head. Over time these symphonies were reduced to a single note that would ring in his ears endlessly, accompanied by angelic and demonic visions.

This phenomenon is consistent with the Greek stories of a “Cosmic Music” that could be heard in one’s head during deep meditation, out of body experiences, dreams and death. Visions of invisible spirits and a corresponding inner music are precisely what was meant by the Greek myth.

Scholars have suggested that Schumann’s doctor used Mercury to cure his syphilis, as the brain tumor discovered during his autopsy is consistent with the known effects of the toxic metal. Mercury is also known to cause a nervous system disorder erethism that leads to visual and auditory hallucinations. Many of the great alchemists were believed to have gone mad precisely because of over-exposure to Mercury. This may very well be the reason that Mercury the metal was associated with the Roman god Mercury, the Divine Messenger. 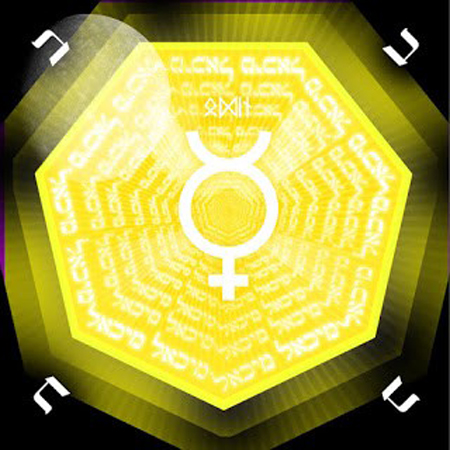 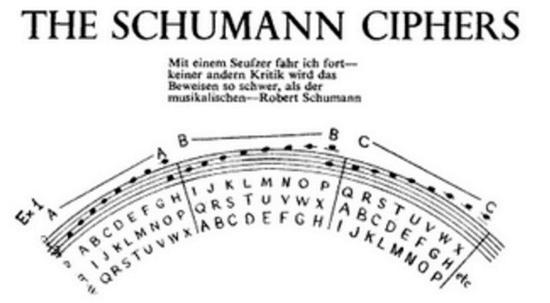 It just so happens that Robert Schumann was a kind of musical alchemist himself. Following in the tradition of the Mystery Traditions, he created a cryptogram (also known as a cipher) whereby each note could be transcribed into a letter of the alphabet, and vice versa, words into strings of musical notes. Consider the following excerpt from Manly P. Hall’s classic esoteric compendium, Secret Teachings of All Ages.

“The musical cipher. John Wilkins, afterwards Bishop of Chester, in 1641 circulated an anonymous essay entitled Mercury, or the Secret and Swift Messenger. In this little volume, which was largely derived from the more voluminous treatises of Trithemius and Selenus, the author sets forth a method whereby musicians can converse with each other by substituting musical notes for the letters of the alphabet. Two persons understanding the code could converse with each other by merely playing certain notes upon a piano or other instrument. Musical cryptograms can be involved to an inconceivable point; by certain systems it is possible to take an already existing musical theme and conceal in it a cryptogram without actually changing the composition in any way. The pennants upon the notes may conceal the cipher, or the actual sounds of the notes may be exchanged for syllables of similar sound. This latter method is effective but its scope is somewhat limited. Several musical compositions by Sir Francis Bacon are still in existence. An examination of them might reveal musical cryptograms, for it is quite certain that Lord Bacon was well acquainted with the manner of their construction.” – Manly P. Hall

Here we find that Mercury was the patron deity of musical cryptography, two centuries prior to Robert Schumann’s inventions. The following is an example of the music he created from the Schumann Cipher.

“A, E♭, C, B♮ (= A, S, C, H) was used in Schumann’s Carnaval, Op. 9. He was romantically involved with Ernestine von Fricken, who came from the town of Aš, in German ‘Asch’. Every piece in the whole cycle is based on one or other of these motifs. The letters are also the note names from ‘Schumann’ and he added the motif E♭, C, B, A (= S, C, H, A) so that three are displayed in breves in the section ‘Sphinxes’. It has been noted that ASCH and SCHA also appear in the title of Schumann’s Faschingsschwank aus Wien, Op. 26.”

During the early 20th century, a man by the name of Paul Foster Case resuscitated the notion of Musica Universalis, introducing a correspondence system that linked musical notes to the alchemical elements, planets, and zodiac signs. Oddly enough, the only astronomical body denied a musical correspondence is our own planet, Earth. Here is the correspondence table: 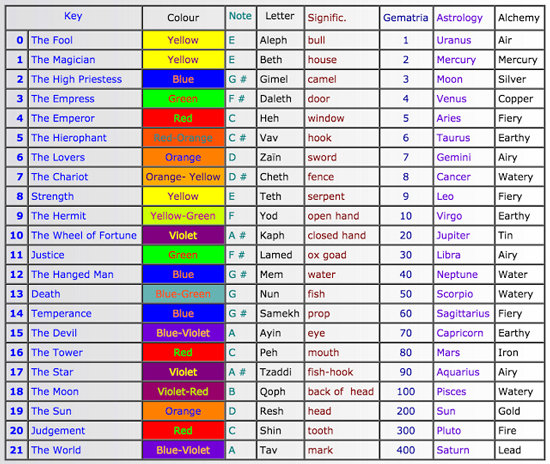 As you can see the Astrology column features the twelve zodiac signs along with the ten planets including Sun and Moon. Earth is missing from the mix. These twenty-two elements are mapped onto the twenty-two paths on the Kabbalistic Tree of Life, as roads between the ten sephirot, or spheres.

When raised to an audible frequency, the 7.83 Hz Schumann Resonance frequency registers as an F# and the color Green. As you can see in the table above, F# is attributed to the planet Venus in the BOTA Cipher. Her corresponding tarot card is the Empress, or Mother Earth, suggesting that F#-Green may be the secret Earth-frequency in the Kabbalistic musical system.

You will see in the images below that the ten spheres (circles) are also attributed to planets. Unlike the paths, they are not assigned any musical tones. The lowest sphere is called Malkuth (Kingdom) and refers to Earth, while the highest is called Kether (Crown) and refers to God itself. 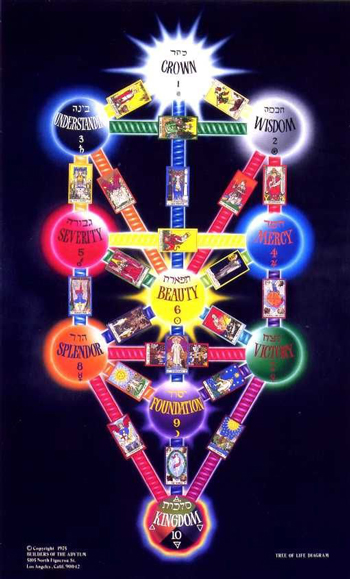 The ten emanations (Kether to Malkuth) go through a process that in Hebrew is called Tzimtzum, meaning Lightning Flash of Creation. A three-veiled egg of light called Ain Soph Aur contracts from its state of infinite luminosity to create a vacuum into which life can be created. Think of it as God’s creation of a petri dish universe. 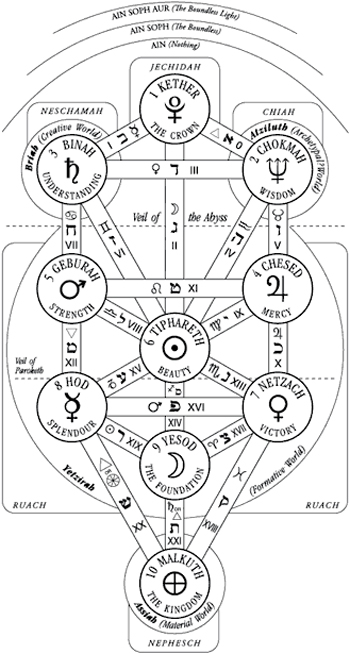 Hanging above Kether like a fermata (the musical rest symbol) is Ain Soph Aur. The musical analogy applies because Ain Soph Aur represents a transcendent space beyond all forms; a state of perfect rest. However, the lightning bolt that emanates from the Tzimtzum (contraction) also links to the scientific model of non-spiritual upper-atmospheric Sprites (spirit) directing electricity towards earth as lightning that strikes Earth (Malkuth) and puts the Schumann Resonance into motion.

We can also add that the Schumann resonance is catalyzed by a divine spark that sustains the planets electromagnetic field, which in turn supports life on the planet.

From Wikipedia: The singing Tesla coil, sometimes called a zeusaphone, thoramin or musical lightning, is a form of plasma speaker. It is a variation of a solid state Tesla coil that has been modified to produce musical tones by modulating its spark output. The resulting pitch is a low fidelity square wave like sound reminiscent of an analog synthesizer. The high-frequency signal acts in effect as a carrier wave; its frequency is significantly above human-audible sound frequencies, so that digital modulation can reproduce a recognizable pitch. The musical tone results directly from the passage of the spark through the air. The flexibility of the sound is limited by the fact that the solid-state coil produces square rather than sinusoidal waves; but simple chords are possible.