TRUMP Reality Check: Everyone needs to read this!


What’s really going on with the POTUS? 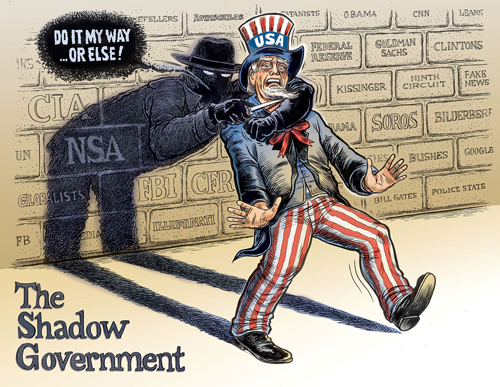 No one person could ever take on Deep State without having to deal with their viciousness. Didn’t mom and dad always say “You can’t fight city hall”? Well, you can, but it will take you time and countless appropriate efforts.

Even Donald Trump can’t expect the fight against Deep State to be an easy one. Where they really got him is when they coerced him to break his campaign promises.

No other POTUS in US history ever won an election based on a promise for peace. There were many other promises made during the campaign season that sold the patriots. But the promise to bring peace and harmony was the real hook.

However, the globalists have cynically created more conflict for Trump. The never-ending wars only eat away at Trump’s base. He is now considered by many to be a war president like his predecessors. Deep State can do this to anybody. The Military-Industrial Complex is vast and powerful. So is the international network of globalist organizations like Council on Foreign Relations (CFR), Trilateral Commission, Bilderberg. The New World Order cabal owns and operates everywhere.

The communist Left controlled the levers of US government for 8 years under Obama. That liberal side of the Deep State power base is entrenched and not going anywhere. Trump can’t even get rid of agents of Deep State like the DOJ’s Rod Rosenstein. Or Special Counsel Robert Mueller. Or Attorney General Jeff Sessions. Or FBI Director Christopher Wray. And others who he himself appointed.

Trump was a businessman; not a politician. He has no idea what he’s really dealing with “inside the Beltway”. What now?
The 2018 midterms will bring a crushing defeat to the Trump administration. The Left is organizing like mad to make sure they win and/or steal every election in sight. Soros, Obama, Clinton et al. know that they only need to flip the House and the Senate. Doing so allows them to impeach Trump. Flipping governorships and statehouses will also provide needed political support. There is an all-out effort — RIGHT NOW — to capture every seat they can by the Democrats.

The anti-Trump sentiments are growing by the day… and will only intensify. Why?
The Spending Bill was a HUGE political disaster for Trump. He lost many fiscal conservatives right there. They’re all gone – with his own signature.
The National Debt has also ballooned under Trump. It’s now well over $21,000,000,000,000! US Government will borrow over $1 trillion by the end of 2018. Trillion Budget Deficits are returning according to the Congressional Budget Office. Trade Deficits are also hitting a 10 year monthly high.
The “successful” Tax Bill was mainly a giveaway to the corporations. The rich and powerful will only get richer from that Democrat-approved legislation.

Obamacare has not been repealed even with Republican majorities in both chambers.
The Border Wall remains as elusive today as it was when Trump first promised it. The Democrats will simply not allow a wall, and they certainly won’t allocate funds. The Deferred Action for Childhood Arrivals (DACA) debate remains just that – a debate (regarding whether the US should keep or deport the kids of illegal immigrants who will be deported as soon as they are discovered in the States). There’s been no real movement.
The Liberals are far too organized to permit any meaningful alteration to Obama’s DACA policies.
As for federal Immigration Policy, every Trump executive order has been thwarted. He knows the liberal courts will overturn every Executive Order, especially the immigration orders. Even those orders that go unchallenged, they will not be enforced.

Next, there is President Trump’s Gun Control, and the right to bear arms. Yes, he’s already foisting his own version on the nation. Trump has directed Attorney General Sessions to craft a new federal policy that is restrictive. The right to purchase bump stocks is on the table. So is the age allowed to buy assault weapons. So are other serious gun control measures that have not yet been put out by the POTUS.
They’re coming… and there’s no stopping it except for the patriots to…

If there is one major area where Trump is extremely weak in, it’s his foreign policy. His Mideast policies are a total disaster. An unmitigated disaster! Moving the embassy to Jerusalem fulfilled a promise to Israel. His roller coaster ride with Russia inspires NO confidence. Neither does his love-hate relationship with China. Nor did his theatrics regarding North Korea’s “rocket man”. Kicking off global trade wars doesn’t help either.

Trump has all but abandoned his campaign promises to Make America Great Again… Particularly by pursuing a perpetual war foreign policy like past presidents. This has become his Achilles’ heel. It was his weakness all along because of his own streak of American exceptionalism. So the globalists will use it to turn his base against him, which they are doing. Once Trump starts his first major war, he’s falling into the Deep State’s trap.
He already attacked Syria a year ago and again this year. He has permitted Saudi Arabia to destroy Yemen – a very bad situation! As he has approved Israeli attacks on Syria this April. He always allows Israel to destroy the Palestinians. He has also supported the fascist neo-Nazis in Ukraine against Russia.

Trump’s foreign policies have the potential to blow up the Middle East. As well as trigger the hot phase of World War 3.

Each of these dismal failures has its roots in the Republican In Name Only leadership. But especially the Neocon Zionist cabal that took over the West Wing. The foreign policy fiascos are driven by this cabal in collusion with the MIC (popular media company in the US addressing to the young population).

Hence, much of the blame falls on the POTUS. Trump could never do this alone. He knew that. He should have known that before he ran.
And yet he’s fired some of the best people to advance his agenda. Most of those who now surround him are a part of the problem. And there are very few left who could be a part of the direly needed solution.
Trump sabotaged his own agenda through many key appointments. Being a top-down management-style CEO, he calls the shots. Which is good when you know what you’re doing. And you surround yourself with competent managers and staff. But there’s NO ONE he can trust to implement his promised domestic plans. Or his promised foreign policies of no more war. And peace with Russia.

What we are witnessing is an unparalleled crisis in presidential leadership. If there’s an upside it’s that Trump uses the chaos and confusion to expose Deep State. To expose the seditious Mainstream Media. To expose the treasonous FBI. And to expose the traitors at the CIA. 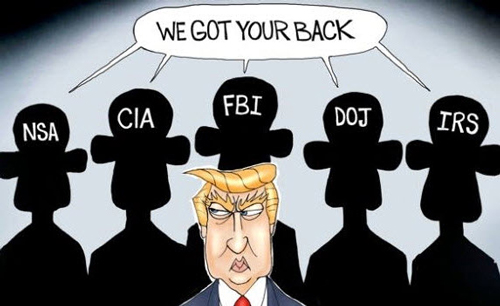 This is the best that the Patriot Movement can hope for right now. This is actually his primary task. He’s the ultimate change agent. He’s still a massive wrecking ball! Which is exactly what Deep State needs right now – a controlled demolition.

However, something very BIG must happen between now and the midterms (which will be held on November 6, 2018). This is the critical time period. The window of opportunity will shut on January 3, 2019. When the 115th U.S. Congress is seated, everything changes.
Trump is well aware of the political calculus. Every day that goes by, his hand gets weaker. He’s also well aware that there’s a gathering storm. Stormy Daniels is only one example of a superstorm heading toward the White House.
When Deep State puts a POTUS in its crosshairs, how can he govern? When even the FBI and CIA tried to prevent his victory, how can he trust them? Now they even raid his personal attorney’s residence and business. That’s after they started a raging fire on the 5th floor of Trump Tower.

The mainstream media is relentless in their negative coverage of Trump. The C.I.A. has so many rogue operations against him, you can’t keep them straight. Trump’s real vulnerability, however, lies in his decades of massive exposure. Because of his various high-profile businesses, what might come out is anyone’s guess. The current reality is that Mueller was appointed Special Counsel to look under every rock. Which is exactly what he’s doing… Which he will continue to do until they have enough evidence to back-channel to his new personal lawyers. At that point, Trump either resigns, is impeached, or he digs in. If he digs in, he will quite likely “wag the dog”. The truth be told, Trump is wagging the dog in Syria at this very moment.

Every single move today on the global geopolitical chessboard is carefully considered. The Powers That Be are on a serious mission. The decisions of the POTUS weigh heavily. However, his foreign policy actions are what really matter from this point forward.
Trump has been methodically cornered into making these decisions about war. To say that he can make lots of wrong moves is gross understatement. His actions can be catastrophic to the extreme. Even leading to nuclear war. This year may be the most consequential of the decade. Or the century. Or even the millennium.

Trump wagged the dog in Syria. He chose the path of least resistance. Political resistance, that is. Even TheWashington Post backed Trump’s decision to attack Syria a second time. Every Republican In Name Only and Democrat in Congress supported his misguided missile attack on Syria. Because of his catastrophic invasion of a sovereign nation, Trump is now a war criminal. He completely shredded his campaign promises with a second egregious war crime. He can lose his base – BIG time!
Every vote for peace in 2016 has been betrayed by this war president. As Commander-in-chief, Trump is directly responsible for the April 14 attack on Syria. Those who would have voted for him in 2020 for peace will now stay home. While the Democrats will be out in force, unless he’s already impeached. Trump did this to himself.

He should have exposed 9/11 as his first order of business. Instead he chose to do business with Saudi Arabia, a major 9/11 co-conspirator. Trump threw major support to the Saudi’s criminal war on Yemen. The ensuing humanitarian crisis is a great stain on his presidency. By getting “in bed” with war criminal Saudi Crown Prince Mohammad bin Salman, he revealed his true intentions.

The Trump presidency is now known as: “Israel comes first, second and third”.

The false flag chemical attack in Douma was staged by the West. As always, American, British, Israeli and French intelligence agencies and militaries conspired to blame President Bashar al-Assad for the chemical attack hoax. It was a black operation executed to justify an attack on Syria to reverse Assad’s victories. Trump knew this. His military advisors knew this. The governments of Great Britain, France and Israel knew this. May, Macron and Trump are Netanyahu’s three stooges! The entire Congress knows that the chemical attack was staged to push Trump into war.
The mainstream media knowingly published fake news about Syria. Once again, false reports were cynically used by a POTUS to wage an unprovoked war of naked aggression.
Trump knowingly trumpeted fake news about Assad’s Syria, Putin’s Russia and Khamenei’s Iran. His false accusations were used as a pretext to launch another illegal attack on a nation already devastated by a 7 year war.

“We the People” have been seriously deceived. Trump conducted this war crime in the name of the American people… And using U.S. taxpayers’ money. In order to rain death and destruction on the innocent people on Damascus! SAD! Very sad indeed! Trump is now a stone-cold war criminal!

Trump is falling into Deep State’s trap set against him.

13 Chemical Threats to Remove from Your Home