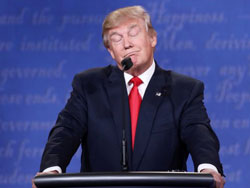 In his first 10 weeks in office, Trump reneged on one promise after another. Instead of draining the swamp, he filled it with neocon generals and billionaires. He escalated ongoing wars, perhaps intends news ones, instead of curbing US interventionism as promised, along with prioritizing more US resources for long-neglected vital homeland needs.

He favors tough law enforcement, police state harshness by any standard, along with abandoning online privacy rights and Net Neutrality.

He hugely disappointed supporters hoping for better. Instead, they’re getting dirty business as usual – harming, not helping, them.

On March 30, Global Trade Watch director Lori Wallach blasted his failure to “make NAFTA ‘much better’ for working people.” His trade agenda “could have come from any past pro-NAFTA administration,” she explained, notably the Clintons, getting it enacted on their watch.

Trump’s trade policy is corporate-friendly at the expense of worker rights and consumer protections. Longstanding US “free trade” isn’t fair. A decade post-NAFTA, around a million US jobs were lost, manufacturing hardest hit. Instead of changing harmful US policies, Trump’s agenda is a dream for corporate America, devastating for the nation’s working class, its unemployed and underemployed.

Wallach earlier explained trade deals like NAFTA and TPP represent “a huge assault on the principles and practice of democratic governance.” They’re especially troubling from a president, promising to “fight for (all Americans) with every breath in (his) body, and never, ever let you down.”

Betrayal followed instead of fulfillment, continuing the same harmful agenda as his predecessors.

It shouldn’t surprise. It’s the way things are in America, no matter which right wing of duopoly governance is in power – serving the nation’s privileged class at the expense of most others.