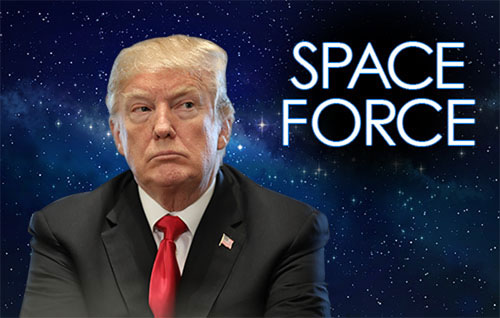 In a recent video uploaded to his YouTube channel ‘Secureteam10’, UFO researcher Tyler Glockner says that Trump’s plans could expose a number of black projects run by the US military.

Although this article is basically a summary of what is contained in the video, it aligns nicely with information put forward by Dr. Michael Salla, in his article, Trump’s Plan for US Space Force challenges Deep State Secrecy. Dr. Salla highlighted that article with this concluding statement:

“Therefore, the real purpose in Trump proposing the Space Force is that he wants to accelerate the disclosure process by which the technologies and know-how that are used in the Air Force’s Secret Space Program, are taken away from the multiple bureaucracies and corporations that secretly run it – the Military Industrial Complex/Deep State.ˮ

“Trump wants the office of the chief executive, the White House, to play a direct role in setting the policy agenda for future space operations, which for decades have been set without any real oversight by the White House.

In the planning and creation of a U.S. Space Force, Trump has initiated a process by which he and the White House will play a more influential role in future space policy, which hitherto have been controlled by the USAF Secret Space Program and the Military Industrial Complex/Deep State.”

Donald Trump, the US president has recently ordered the military to establish a new branch named ‘space force’. During a speech delivered at the meeting of the National Space Council in White House, the president made it clear that the sole purpose of the new force is to ensure country’s dominance in space.

UFO researcher Tyler Glockner has put forward a different theory about Trump’s space force. Glockner says that Trump’s plans could expose a number of black projects run by the US military.

“My main thought is there has long been a theory of a secret space programme that is vastly more advanced than anything we could imagine. So people in the military will be against the idea of creating a Space Force because one already exists. These missions continue to be funded by black project dollars.ˮ

As Glockner made these claims, many people argued that Trump’s move is aimed at psychologically preparing the general public to accept the real facts behind the existence of aliens. They even argue that an alien invasion is imminent and this is the major reason behind Trump’s decision to launch ‘space force’.

“There are a lot of people in the US government who are extremely against the Space Force. It makes me wonder why. My main thought is there has long been a theory of a secret space programme that is vastly more advanced than anything we could imagine. So people in the military will be against the idea of creating a Space Force because one already exists. These missions continue to be funded by black project dollars,” said Glockner in the video.

In addition, Tyler Glockner also talked about Solar Warden, an alleged space program run by US with the help of United Nations. As per conspiracy theorists, there has been a fleet of spaceships in the solar system safeguarding earth from alien invasion and this fleet of human-made security ships are known as solar wardens.

The ‘Secureteam10’ video has already racked up 1,091,795 views, and spectators were quick to share their thoughts on these assumptions made by Tyler Glocker.

“I’m glad you touched on this, mainstream media and a lot of other media type channels have kind of pushed this to the side when there’s a lot of info that needs to be told to the public in regards to this ‘space force’. I have found some crazy and shady things that just surround trump’s ‘space force’. something very fishy about, just seems as if we are all missing something,” commented INameless Network, a YouTube user.

“What everyone thinks of as ‘aliens’ are actually Extra Dimensional beings, (not Extra-Terrestrial). So when they say ‘Space Force’ they really mean 4th Dimensional Force,” commented another YouTuber named Leonidas.

The Facts About Candida Overgrowth and How to Overcome It

Why Intermittent Fasting is More Effective Combined with Ketogenic Diet