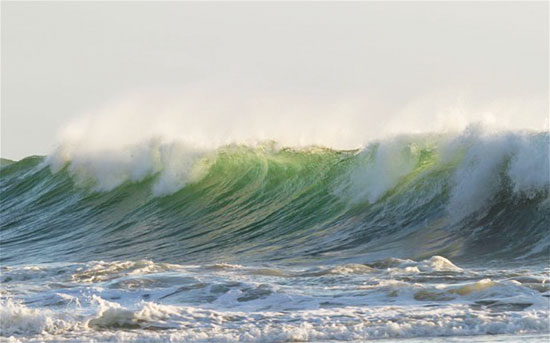 Tests for a tsunami bomb were carried out in waters around New Caledonia and Auckland during the Second World War and showed that the weapon was feasible and a series of 10 large offshore blasts could potentially create a 33-foot tsunami capable of inundating a small city.

The top secret operation, code-named Project Seal, tested the doomsday device as a possible rival to the nuclear bomb. About 3,700 bombs were exploded during the tests, first in New Caledonia and later at Whangaparaoa Peninsula, near Auckland.
The plans came to light during research by a New Zealand author and film-maker, Ray Waru, who examined military files buried in the national archives.

“Presumably if the atomic bomb had not worked as well as it did, we might have been tsunami-ing people,” said Mr Waru.
“It was absolutely astonishing. First that anyone would come up with the idea of developing a weapon of mass destruction based on a tsunami … and also that New Zealand seems to have successfully developed it to the degree that it might have worked.” The project was launched in June 1944 after a US naval officer, E. A. Gibson, noticed that blasting operations to clear coral reefs around Pacific islands sometimes produced a large wave, raising the possibility of creating a “tsunami bomb”.

Mr. Waru said the initial testing was positive but the project was eventually shelved in early 1945, though New Zealand authorities continued to produce reports on the experiments into the 1950s. Experts concluded that single explosions were not powerful enough and a successful tsunami bomb would require about 2 million kilograms of explosive arrayed in a line about five miles from shore.

“If you put it in a James Bond movie it would be viewed as fantasy but it was a real thing”, he said.
“I only came across it because they were still vetting the report, so there it was sitting on somebody’s desk [in the archives].”

Forty years after the joint testing, New Zealand faced a dramatic breakdown in its security ties with the US after it banned the entry of nuclear-armed ships from entering its territory during the 1980s. The dispute led to the US downgrading its relationship with New Zealand from an “ally” to a “friend”.

In his new book Secrets and Treasures, Mr. Waru reveals other unusual findings from the archives including Defence Department records of thousands of UFO sightings by members of the public, military personnel and commercial pilots.
Some of the accounts of the moving lights in the sky include drawings of flying saucers, descriptions of aliens wearing “pharaoh masks” and alleged examples of extraterrestrial writing.