Emails reveal that a popular source for mainstream Western media is a U.K.-backed propaganda outlet 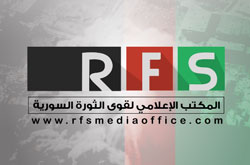 The Revolutionary Forces of Syria Media Office (RFS), a major Syrian opposition media outfit and frequent source of information for Western media, is funded by the British government and is managed by Westerners operating out of Turkey, according to emails provided to AlterNet by a Middle East reporter RFS tried to recruit.

The outlet stirred controversy in November 2016 when it released a video at the height of the Mannequin Challenge, a pop culture craze in which people compete for how long they can freeze in place on video. The RFS video depicted a staged rescue by the White Helmets, the Western-funded rescue group that operates exclusively in rebel-held territory. RFS quickly removed the video and issued an apology out of apparent concern that the staged rescue could raise questions about the authenticity of other videos by the White Helmets.

Over the summer, the Middle East reporter, who asked not to be named, was contacted by an American acquaintance and former colleague about working for RFS.

“I’m currently in Istanbul, working on a media project for the HMG [the British government]” wrote the acquaintance in an email time-stamped June 23, 2016. “We’re working on media surrounding the Syrian conflict, as one of their three partners.” The email included links to RFS’s English website and SMO Media, an Arabic website that covers the Southern Front, a Western-backed Free Syrian Army (FSA) group.

“We’re looking for a managing editor/production manager to head up our team here in Istanbul, and I thought you’d be a great fit. I was wondering if you had any interest, or knew of anyone looking to move out to Istanbul for an opportunity”the acquaintance added. 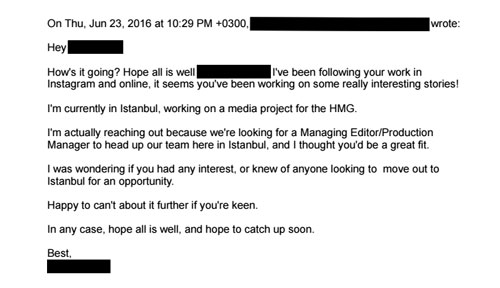 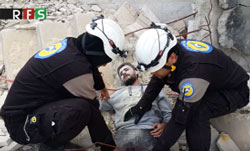 In a follow-up phone conversation, the acquaintance explained to the reporter what the job would entail.

“I would have been talking to opposition people on the ground and writing news pieces based on statements from media activists who are affiliated with the armed groups in places like Aleppo” the reporter later explained.

The salary offered for this task was an eye-popping $17,000 a month.

The reporter ultimately decided not to pursue the RFS position because he felt it would be journalistically unethical.

“The idea that I would work for the government of a country that’s intimately involved in the Syrian conflict is one that’s incomprehensible for me as a journalist” he told AlterNet.

“This was far beyond working for state-owned media in my opinion. It was to actually be a mouthpiece for specific armed groups that are backed by a Western regime with a long history of disastrous interference in this region. That doesn’t mean I don’t have sympathy for people who are against the Syrian government. I am not pro-regime. At the same time, I am a journalist and would like to maintain my integrity at that level.”

The reporter declined to recommend others for the job, saying, “I’m not going to facilitate some dubious relationship between a reporter and what is obviously a propaganda outlet” he said.

RFS did not respond to a request for comment. 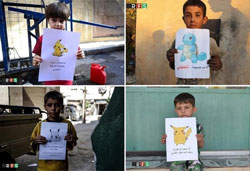 Western media often relies on self-described “media activists” in areas controlled by Western and Gulf-backed militant groups, like Jabhat al-Nusra (until recently Al Qaeda’s affiliate in Syria), Ahrar al-Sham, Jaish al-Islam and Harakat Nour al-Din al-Zenki. These groups are explicitly anti-democratic and have been implicated in human rights violations from mass execution to using caged religious minorities as human shields. Most recently, civilians fleeing rebel-held eastern Aleppo have described being fired on by militants seeking to prevent them from escaping to the safety of government-controlled territory.

Another journalist recalls that few months ago, she spoke over the phone to a frequently quoted media activist living in East Aleppo. He told her that if he publicly criticizes the armed opposition groups, he risks being tortured, or worse. Indeed, a largely ignored report by Amnesty International published in June 2016 revealed that civilians in opposition-controlled Aleppo and Idlib have been subjected to abduction, torture and summary execution simply for criticizing armed groups on social media.

RFS ’s videos and hashtags are regularly picked up by major Western media outlets. One of its videos has even been cited by human rights groups as evidence of Russian war crimes. Among its most viral campaigns is AvengersInAleppo, which featured photos of children living in East Aleppo holding up signs calling on Marvel comic book superheroes to save them. (East Aleppo is controlled by a number of extremist groups led by Al Qaeda’s renamed offshoot, Jabhat Fatah al-Sham.)

Prior to that, RFS capitalized on the popularity of Pokémon Go to sell a pro-interventionist message to Western audiences with photos of children in opposition-controlled areas of Syria holding up photos of Pokémon characters with messages calling for intervention. The campaign garnered favorable media coverage from major outlets, including The Guardian, The Washington Post, CNN, The Independent, Reuters, and BBC, none of which have bothered to question the origins of RFS or similar pro-opposition outlets. 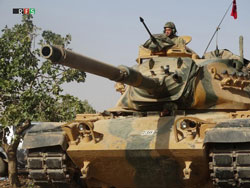 RFS Media is just one of several different propaganda outlets financed by the U.K. Foreign Office. A recent investigation by The Guardian revealed that the British Foreign Office Conflict and Stability Fund has secretly pumped at least £2.4 million (over $3 million U.S.) into pro-rebel propaganda outfits based out of Istanbul.

The money began flowing after the British Parliament voted against bombing the Syrian government in late 2013. (RFS Media was launched in December 2013 in both English and Arabic.) The vote against war was attributed in large part to public pressure, as citizens on both sides of the Atlantic, reluctant to overthrow yet another Middle Eastern government after the disasters in Iraq and Libya, mobilized against another campaign for Western regime change in Syria.

After the political defeat, the U.K. Foreign Office embarked on a clandestine propaganda campaign to suppress the public’s anti-war sensibility, hiring private contractors to “produce videos, photos, military reports, radio broadcasts, print products and social media posts branded with the logos of fighting groups, and effectively run a press office for opposition fighters” according to The Guardian.

Sanitizing the armed opposition as “moderate” has been a difficult task to be sure. While Western officials were well aware of the extremist and violently sectarian ideology that dominated the opposition early in the conflict, they deliberately chose to whitewash their atrocities in favor of weakening the Syrian government. RSF Media has stayed true to that goal, portraying armed groups as liberators and protectors adored by the people living under them, a narrative Western media outlets have enthusiastically echoed even as their own reporters were kidnapped, ransomed and even shot by Western-backed rebels.

This has presented a puzzling contradiction in Syria coverage. On the one hand, foreign reporters do not dare enter opposition areas for fear of being abducted. Yet the same media outlets that refrain from sending their reporters to opposition areas are comfortable amplifying propaganda that comes out of these areas with almost zero scrutiny, despite the fact that such information almost certainly requires the approval of the armed groups they fear may kidnap their reporters.

The warped picture of Syria that has been provided to Western media consumers is not the fault of the Syrian opposition, which is merely advancing its own most immediate public relations needs without regard for the objective truth, as combatants in war often do. It is, however, a damning indictment of a media establishment that has failed to scrutinize convenient pro-war narratives that serve their own governments’ geopolitical interests.

Deepak Chopra – Can Science Help Us Deal With Death?