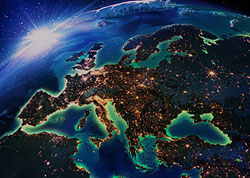 The EU is animated by Baron Louis de Rothschild’s paid agents, EU father Richard Coudenhove Kalergi’s, plan for racial exchange in Europe through mass immigration: Europeans are supposed to look like the ancient Egyptians in the upcoming one-world state of the technocratic Illuminati / Freemasons to avoid racial tensions – everything governed by the Jewish master race. Nicolas Sarkozy foolishly made the “duty” of the French to contribute to this madness through “métissage” (mixed marriages/ procreation).

The UN draws a gloomy demographic picture of Europe: the population figure will fall drastically – and in order to make up for this trend drastic immigration quotas should be created.

The late Udo Ulfkotte wrote in The End of Europe in 2015: “In the recently published UN report Replacement Migration of the UN Population Division from the UN in 2001, the opening up of Germany to 11.4 million migrants was demanded, even if this would lead to social tensions within the country (‘rise to social tensions’).

At a confidential meeting at St. Augustin near Bonn, the Federal Government has made an internal decision about what the ministries will have to do in the future: “Up to 10 million asylum seekers are expected in Germany”. What at first glance sounds completely absurd to the average citizen, however, can already be proven with facts.

One must only know that the Federal Government expects (at least) two family stragglers for each asylum seeker: in 2014, there were a total of 300,000 asylum seekers (i.e. about 900,000 in all, with their family members coming to Germany along with them).

In 2015 it was clearly more than one million (with family sufficiency, i.e. at least three million) and for 2016 the number was close to one million, but it gets three times higher including the family reunification. So in all, in the end it can get to be about seven million people.
The United Nations calls this all “replacement migration”. 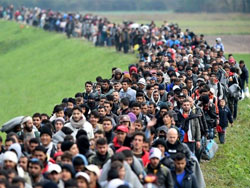 In so doing, peoples are easily replaced by others with the blessing of the UN. In the context of the UN, a proposal has already been made on how this should be financed: the Germans are to rise their pension age in the first step to 72 and in the second step to 77 years.
This is the only way to feed the many new fellow citizens in the Mecca of Germany.
The Germans, who are so self-destructive, finally have something from it. They are allowed to swing flags and applaud at the station, to welcome the new citizens, and to throw teddy bears to them.

D.A. Coleman, University of Oxford 2001 had this still very valid comment to the UN report on the prospect of demographic salvation from population ageing by migration: “The impression given was that substantial increases in immigration, some of them astronomical, were the only option in many cases to prevent declining population, declining workforce and support potential.”

Typically these three aims require progressively higher numbers of immigrants. Any population with sub-replacement fertility attempting to maintain a given population size through immigration would accordingly, acquire a population of predominantly, eventually entirely, immigrant origin. Populations can only adopt this solution to stabilise the numbers at the risk of the loss of their original identity by massive immigration and rapid displacement of the original population from its majority position.

The official response (Tweede Kamer der Staten General 1983) concluded that “Continuing population growth will have an adverse effect on the wellbeing of the nation, and therefore the perspective of growth coming to an end as a consequence of below-replacement fertility (as observed since 1972) is welcomed.”

The official submission to the UNECE/UNFPA Regional Population Meeting in Budapest 1998, for example, stated that “in the longer run a stationary population is viewed as desirable” – Government of the Netherlands, 1998.

There is a low demographic advantage. Large numbers are required for modest results. Then immigrants themselves age and need to be replaced by further immigrants with high birth rates.

Most examples of replacement migration in the UN study required immigration so high (1.2 million per year for 50 years in the UK case) that population would be doubled in fifty years and then more than doubled again in fifty years and so on ad infinitum.

The difficulty of correcting ageing through immigration, except through very high population growth, is underlined by a comparative analysis by the EU Commission. While it would only take between 500,000 and a million additional immigrants per year to avert population decline in the EU in the earlier part of the next century, to preserve the current age-structure of the “15 EU countries would require 4.5 million (net) immigrants per year by 2007 and 7 million net per year by 2024” – European Commission, 1996.

These results imply that very high proportions of the populations concerned – eventually a majority – would be of immigrant origin. The UN report made some simple calculations to show the effect, assuming that immigrant fertility immediately declined to that of the host population and that no previous immigrant-origin population existed. Neither of these assumptions is correct, but the UN data provide a base-line. Fertility levels of immigrant populations are usually higher, sometimes much higher than those of Western host populations, although not always.

“In the long run, the minority will become the majority in a country if there remains even one region where the increase of the proportion of the minority continues to increase through immigration and higher birth rates.” – Steinmann & Jäger, 1997.

Final note: 16 years on, we are witnessing this development at a stunningly accelerating tempo.