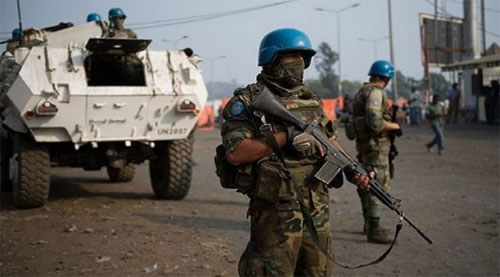 United Nations peacekeepers in Haiti ran a pedophile ring for over three years, sexually abusing scores of children undetected, according to a new investigation.

An AP investigation is the latest in a long line of sex abuse scandals to hit the UN in recent years.

In 2015, French UN peacekeepers were embroiled in a child sex abuse scandal when it was discovered that soldiers were abusing children as young as nine – trading oral sex in war-zones while officials looked the other way.

According to investigators, between 2004 to 2007, 234 peacekeepers from Sri Lanka operated a child sex ring, enticing them in with candy and cash in exchange for sex.

Foreignpolicy.com reports: “After a UN report incriminated them, most were sent home, but none faced jail time.”

One victim told UN investigators, “I did not even have breasts,” according to the AP. Over a period of three years, beginning when she was 12 years old, she was forced to have sex with over 50 peacekeepers, the AP said.

The blue helmets first came to Haiti in 2004, after a rebellion saw Haitian President Jean-Bertrand Aristide ousted.
There’s little doubt sexual abuse has become a systemic problem among peacekeepers. To date, there have been over 2,000 allegations of sexual abuse, 300 of those involving children, according to the AP report. But due to legal restrictions, the UN is not permitted to punish perpetrators, a responsibility which is left to host countries in places where those governments are often neither capable nor willing to bother.

The UN first commissioned a report on sexual abuse among its peacekeeping forces more than 10 years ago, but little was done to effectively stop it. In 2016, the UN mission in the Central African Republic became embroiled in reports that more than 100 people had faced sexual abuse at the hands of peacekeepers.

Some have accused the UN of taking no action in the face of sex abuse reports, what former UN investigator Peter Gallo referred to as an “out of sight, out of mind strategy”. In June 2016, Anders Kompass, a child sex abuse whistleblower at the UN, resigned in frustration at the UN’s failure to adequately respond to allegations.

On April 13, 2017, the UN Security Council voted to end the peacekeeping mission in Haiti. The five permanent members of the Security Council agreed that after the 13-year mission, the country was stable.

The move was a long time in coming; the mission has long been deeply unpopular both in Haiti and globally. Peacekeepers are blamed for introducing a virulent strain of cholera to the island nation, which to date has killed more than 9,000 inhabitants. The UN did not admit its role in the epidemic until 2016, and has raised only a portion of the promised funds to treat the victims.

Nikki Haley, U.S. Ambassador to the UN, mentioned the new sexual abuse allegations in her remarks to the UN in April 2017. “What do we say to these kids? Did these peacekeepers keep them safe?”