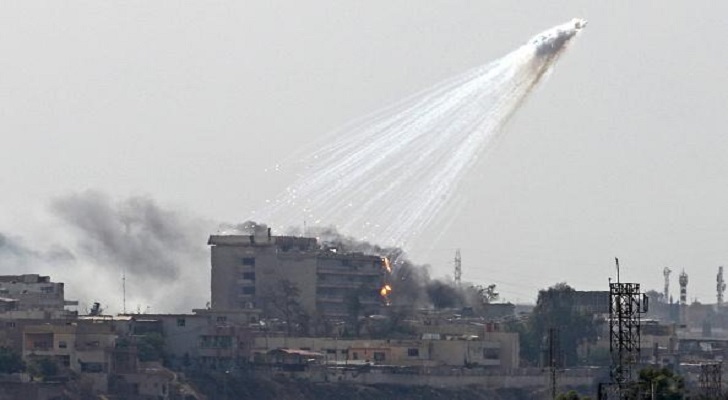 Earlier this June, multiple reports surfaced of US-led coalition forces in Mosul, Iraq and Raqqa, Syria, using the incendiary chemical weapon, white phosphorus, on civilians. For over a week, the US government and the coalition at large have remained silent on the issue.

In an error that probably got him much backlash, in an interview with NPR, New Zealand Brig. Gen. Hugh McAslan, and member of the US-coalition has admitted — for the first time — to using white phosphorus during operations in the Iraqi city of Mosul. “We have utilized white phosphorous to screen areas within West Mosul to get civilians out safely,” McAslan told NPR.
Instead of questioning the horrid nature of the chemical weapons use on civilians, NPR echoed the general’s sentiment and noted that 28,000 civilians have managed to escape. While that may be true, countless others were injured or suffered horrifying deaths.

White phosphorus is described as an “incendiary and toxic chemical substance used as a filler in a number of different munitions that can be employed for a variety of military purposes.” The chemical was banned internationally after the 1980 Protocol on Incendiary Weapons restricted the “use of incendiary weapons as a means or method of warfare during armed conflict.”

The use of chemical weapons is clearly prohibited in international armed conflicts. The International Committee of the Red Cross noted that “employing asphyxiating, poisonous or other gases, and all analogous liquids, materials or devices is listed in the Statute of the International Criminal Court as a war crime.” While deploying incendiary weapons against residential areas is banned under Protocol III of the Convention on Conventional Weapons (CCW), the two other uses — smoke screens and signals — are not, which allows the hypocritical US, to keep such munitions in their arsenal and use them. It is through this loophole that the US claims the right to deploy these deadly weapons on towns.

White phosphorus remains very dangerous even when not deliberately used to start fires or attack humans. Submunitions can ignite days after deployment and remain a hazard for a city. Injuries caused by the chemical can burn to the bone and are prone to reigniting if a piece of the phosphorus remaining in the wound is exposed to air when a dressing is changed.

“No matter how white phosphorus is used, it poses a high risk of horrific and long-lasting harm in crowded cities like Raqqa and Mosul and any other areas with concentrations of civilians,” said Steve Goose, arms director at Human Rights Watch.

The US claims of using white phosphorus as a smoke screen or signal ring hollow when assessing the damage reported on the ground in Syria and Iraq. Just as the rights groups warned, civilian casualties were, in fact, a reality from the coalition’s deployment of white phosphorus. 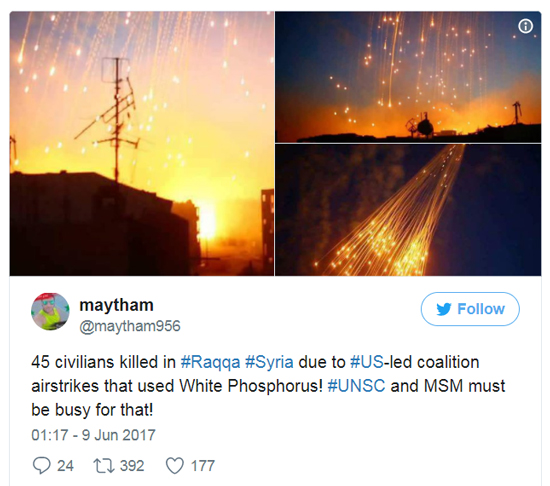 Although the total number of civilian deaths has not been entirely confirmed, early reports suggest that nearly 50 people were killed.

Although NPR happened to have the general admit to them US forces are using white phosphorus, no other mainstream outlet in America has picked up this bombshell story. Their silence shows their complicit nature in covering up the alleged war crimes of the West.
“US-led forces should take all feasible precautions to minimize civilian harm when using white phosphorus in Iraq and Syria,” Goose said of the situation. However, from the reports on the ground, that appears not to be the case. 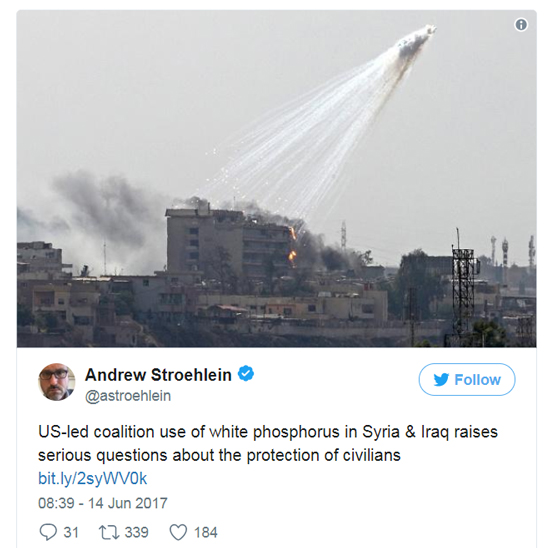