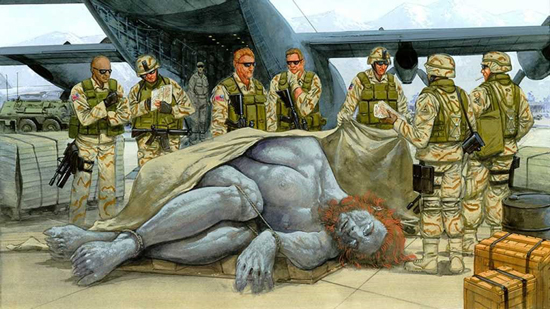 On April 12 (2017), the U.S. Air Force dropped the largest conventional bomb in the Pentagon’s arsenal to flush out Islamic State terrorists according to official Pentagon reports. However, insider testimony suggests another reason for the use of the MOAB bomb. The undisclosed goal is to flush out, capture or destroy giants hiding in Afghanistan’s ancient cavern system who possess technological secrets going back to the origins of human civilization.

The Massive Ordnance Air Blast Bomb (MOAB), aka “Mother of All Bombs” contains 21,600 pounds of explosives and has a mile-long blast radius. The Intercept reported that the MOAB was not used by the Bush administration back in 2003 due to fears of collateral damage.

President Donald Trump appears to be living up to his pledge to bomb out ISIS. But is he? Are ISIS terrorists the real target or just a cover for an undisclosed enemy? A threat Trump may not have been briefed about, but one locked in the cross-hairs of the Deep State that is really behind the Pentagon attack.

A number of whistle-blowers have come forward with stories of giants hiding in Afghanistan and other locations, where these giants are currently awakening from “stasis chambers” they have been asleep in for thousands of years.

Secret Space Program whistle-blower, Corey Goode, was among the first to publicly disclose the existence of “stasis chambers” that have been holding perfectly preserved giants for millennia.

In an August 4, 2015 interview, Goode discussed how he had accessed information on “smart-glass pads” during his covert service about these sleeping giants and the technology of the stasis chambers that were preserving them. Goode said: “When I was in the program, the Secret Space Program, when I would have time to sit and look at the smart-glass pad, there was lots of information that I looked at. And one of them was that there were beings that they found underneath the surface of Earth, usually underneath mountains, burial mountains… Indian burial mounds that were not dead but weren’t quite alive. They called them ‘stasis beings’. And it turned out that had used a technology that had been there long prior, from this group they called the ‘ancient builder race’… So, it didn’t put the beings in stasis that a lot of us would think of, as in being frozen. But it just changed the way they experienced time.… they would probably go to sleep for maybe 20 minutes, and 30,000 years or so would pass by.”

Goode described the size of the beings found in the stasis chambers: “And to look down in, we saw these very tall beings, or very large giant humans with reddish beards… these tall, red-headed, red beard groups were in Europe and South and North America. And apparently, at one time, before the last Ice Age apparently, they had a very large area that they ruled.”

According to Stephen Quayle, who has written several books about giants, elite U.S. military forces have been stationed around the world, including Afghanistan, to locate the giants. He cites elite military personnel who have spoken to him about battles with the giants.

During one of Quayle’s radio interviews on Coast to Coast AM, one of his military informants called in and told the audience about an incident in Afghanistan, involving a deadly encounter between a 12 foot giant and U.S. Special Forces. The informant claimed that the giant had killed nine members of an elite team sent to capture it, and it took a second team to arrive and finally kill the giant.

There are similar stories from another Special Forces operative stationed at McDill Air Force Base, who has served in Afghanistan and is knowledgeable about the secret war to capture or kill giants. 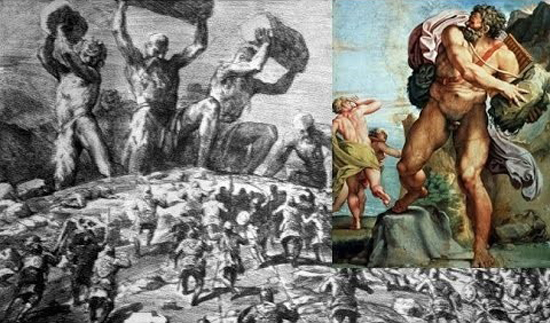 Quayle uses biblical sources to support his analysis of giants and what they mean for humanity in the current era. Basically, he views them as the biblical “Nephilim”, who are the offspring of “Fallen Angels” who interbred with humanity as mentioned in the Book of Genesis: “The Nephilim were on the Earth in those days, and also afterward, when the sons of God came in to the daughters of man and they bore children to them. These were the mighty men who were of old, the men of renown.”

There are multiple biblical passages that refer to giants [Nephilim] and the wars waged against them by the ancient Israelites.

So they brought to the people of Israel a bad report of the land that they had spied out, saying: “The land, through which we have gone to spy it out, is a land that devours its inhabitants, and all the people that we saw in it are of great height. And there we saw the Nephilim (the sons of Anak, who come from the Nephilim), and we seemed to ourselves like grasshoppers, and so we seemed to them.” [Numbers 13:31-33]

The Nephilim/giants, according to Quayle, were predicted to re-emerge during the end of times, and be restored to power by the corrupt global elite who maintain bloodline connections to the Fallen Angels.

Some say the Fallen Angels described in the Bible were actually extra-terrestrial refugees who established a colony in Antarctica approximately 60,000 years ago. The extra-terrestrials, originally from Mars, established their Antarctica colony right over ancient builder race technology that is millions of years old according to Corey Goode.

The Fallen Angels/extra-terrestrial refugees (“Pre-Adamites” according to Goode) established colonies all around the world, including the Middle East. They used genetic engineering to create hybrid off-spring, the Nephilim/giants, who were placed in positions of authority to rule as proxies for the alien refugees in Antarctica.

The ultimate source of power of the Nephilim/giants was the advanced extra-terrestrial technologies possessed by their pro-genitors, the Fallen Angels/Martians/Pre-Adamites.

In a strange irony, perhaps intentional, the Bible refers to a tribe descended from Moab – son of Lot, who battled giants called the Emim. The Book of Deuteronomy says: “The Emim lived there formerly, a people as great, numerous, and tall as the Anakim. Like the Anakim, they are also regarded as Rephaim, but the Moabites call them Emim. The Horites formerly lived in Seir, but the sons of Esau [Moabites] dispossessed them and destroyed them from before them and settled in their place, just as Israel did to the land of their possession which the Lord gave to them.”

In this passage, the descendants of Moab destroyed the giants in the land that the Moabites wanted to settle. Now, the Pentagon just used a bomb called MOAB, allegedly to destroy giants hiding in Afghanistan’s cavern system, if Quayle and other sources are correct. This does not appear to be a mere coincidence.

In addition, the name ISIS refers to an ancient Egyptian Goddess widely worshipped throughout the Ancient Middle East as a benevolent entity. It would not be a stretch to view her as among the Fallen Angels/Extra-terrestrial Refugees or Nephilim/giants that influenced human affairs through advanced technologies that made them appear god-like to humanity at the time.

The motivations of the giants are far more complex than what biblical accounts suggest. Some of the giants, according to multiple sources, were benevolent and not all bloodthirsty tyrants with the intent on subjugating humanity.

Isis may have been a benevolent giant or extra-terrestrial refugee who had access to advanced technologies and wished to help humanity evolve in a positive direction. This suggests a hidden agenda behind the use of the acronym ISIS to describe Islamic fundamentalist groups behind global terrorism.

Are we currently repeating history where humans are attacking giants to gain control over territory and ancient knowledge? This appears to be the case in Afghanistan with the use of MOAB against alleged ISIS terrorists.

Some believe that what we are witnessing in the Middle East in terms of the war against ISIS terrorists is a cover for a covert war against giants, some of whom are followers of the ancient goddess ISIS. The April 6 (2017) Pentagon strikes against Syria might also be part of this covert war, being waged against giants. On the border between Syria and Lebanon lies Mount Hermon, which was described as the main base of operations of the Fallen Angels/Extra-terrestrial refugees.

And it came to pass, when the sons of men had increased, that in those days there were born to them fair and beautiful daughters. And the Angels, the sons of Heaven, saw them and desired them. And they said to one another, according to the Bible: “Come, let us choose for ourselves wives, from the children of men, and let us beget, for ourselves, children… And they were, in all, two hundred and they came down on Ardis, which is the summit of Mount Hermon. And they called the mountain Hermon because on it they swore and bound one another with curses.”

Mount Hermon is where the Nephilim had their centre of power for the Middle East, and where presumably much of their advanced technologies were hidden.

Consequently, the renewed push for the U.S. to enter the Syrian Civil War is not driven by humanitarian concerns at all, as claimed by President Trump. Instead, the real goal is for U.S. military forces to enter Syria and locate the ancient bases used by the Fallen Angels/giants, and gain control over the extra-terrestrial technologies that are hidden there.

Clearly, the surge of U.S. military activities in Afghanistan and Syria is a matter of great global concern due to the loss of innocent life. What adds to such concern is evidence that giants, some of whom may be benevolent, are being secretly targeted for capture or destruction.

The information that giants have about ancient human civilizations, advanced technologies and extra-terrestrial life deserves to be publicly released as soon as possible, and not withheld to further the interest of the US military and global elites who seek to monopolize information possessed by giants for their own hidden agendas.