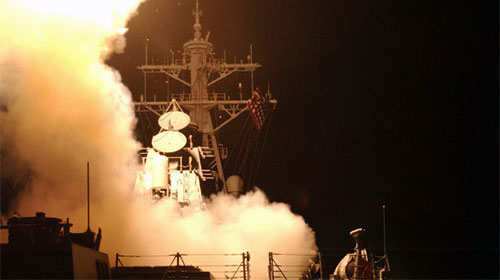 The USS ‘Donald Cook’, a guided-missile destroyer, has left Cyprus and was reportedly moving to the eastern Mediterranean. The movement of the vessel cames as top US officials have threatened to attack Syria.

The Arleigh Burke-class warship, which carries 60 Tomahawk cruise missiles on board, left the port of Larnaca in Cyprus on Monday, April 9, the US Navy reported. Several media outlets cited defense sources as saying that the destroyer moved towards Syria. The ship was at the time the only naval asset the US could use to strike targets in Syria with cruise missiles.

The movement came as President Donald Trump was still weighing up his options to respond to reports of a chemical weapons attack in the town of Douma in Syria. The claims came from pro-Islamist sources amid an imminent military defeat of the jihadist group which holds the city and refuses to leave it.

Red Crescent medics working on the ground failed to confirm an attack happened, while Russia said the reports were false – although Washington insists they warrant military action against the Syrian government.

“We can’t let atrocities like we all witnessed… we can’t let that happen in our world,” President Trump told reporters on Monday, April 9, “especially if because of the power of the US, we are able to stop it.”

US envoy to the UN, Nikki Haley, called Syrian President Bashar Assad “a monster” at a Security Council meeting called to discuss the alleged chemical weapons attack.
She added that the US will not be deterred from attacking Syria by a lack of UNSC mandate.