Vatican Whisks another Alleged Pervert Priest to Safety – This One from Its D.C. Embassy


The U.S. State Department asked that immunity be lifted on a priest over child pornography charges. The Vatican responded by swooping the alleged pervert back to Rome.

Pope Francis very famously doesn’t like walls, except, it seems, when they come in handy. At least that’s the impression that the Holy See is giving with its response to an August 21 request by the U.S. State Department to lift diplomatic immunity to charge a yet unnamed priest suspected of collecting child pornography. The accused priest, who was described as “high ranking” by the Associated Press, was instead whisked back to Rome where he is now safe from secular prosecution inside the Vatican’s fortified walls. 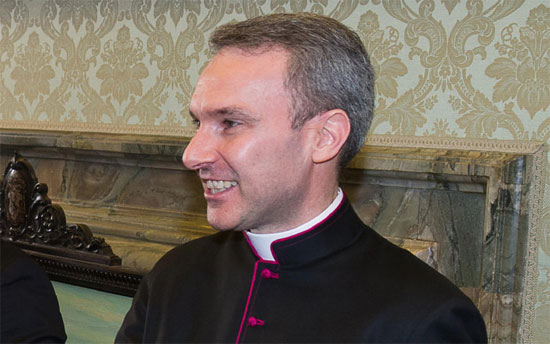 The New York Times, citing some Italian media and an unnamed American source familiar with the investigation, identified the perpetrator as 44-year-old Italian Carlo Alberto Capella, who has been a priest since 1993 and part of the Vatican’s diplomatic corps since 2004. Records show he worked closely with the Vatican’s secretariat for the economy focused on the Vatican’s often murky financial affairs.

The Vatican Press Office will not confirm the identity of the priest, but issued a statement with scant details. “The Holy See, following the practice of sovereign states, recalled the priest in question, who is currently in Vatican City,” the statement says. “Having received such information from the United States government, the Secretariat of State transmitted this information to the Promoter of Justice of the Vatican Tribunal. The Promoter of Justice opened an investigation and has already commenced international collaboration to obtain elements relative to the case. It should be noted that, as provided by the laws in force applicable to all preliminary inquiries, the investigations carried by the Promoter of Justice are subject to investigative confidentiality.”
In other words, same old story.

The Vatican has shown a remarkable capacity for opacity when it comes to the sinister crimes of clerical child sex abuse. Granted, this priest is not known to be accused of directly abusing children. But if he is in possession of child pornography, as the United States alleges, he might as well be, since child pornography is almost always filmed under horrific circumstances.

A spokesperson for the State Department told Reuters that they hoped the pope would keep his promise to “act decisively with regard to cases of sexual abuse.”
“The United States encourages the Holy See to ensure full implementation of its reforms and policies designed to protect minors and provide justice regarding allegations,” the spokesperson said.

The saga calls to mind several high profile cases in recent years when the Vatican preferred to protect its own rather than protect innocent children. In 2015, Josef Wesolowski, the Vatican ambassador to the Dominican Republic was accused of victimizing shoeshine boys in Santo Domingo. When the accusations first surfaced, he was whisked back to Rome so he wouldn’t have to face charges in a secular court.

While in Rome, Wesolowski was found hoarding more than 100,000 files with child pornography while inside Vatican City, presumably on the computer he brought back, rather than something he downloaded using a Vatican server.

He, too, was to face the Vatican’s Promoter of Justice at a special Vatican trial. But he died suddenly, at the age of 67, on Vatican grounds, apparently while watching TV.

More recently, the Vatican’s third in command, Cardinal George Pell, former head of the Secretariat for the Economy and essentially Capella’s boss, was sent back to Australia to face decades old child sex abuse allegations there that stemmed from his early days in the Australian church. He had been living under immunity that comes with what one might assume is a highly sought after diplomatic Vatican passport for several years while the Australians tried to get him to come back home. He finally went back this summer.

The latest trouble comes at a particularly delicate moment for Francis, who faces increasing scrutiny on his approach to the very reproachable crimes of the Catholic Church.

In March, Marie Collins, the second abuse survivor on Francis’s commission to combat child sex abuse, quit. In a damning open letter published by the National Catholic Reporter she cited “lack of resources, inadequate structures around support staff, slowness of forward movement and cultural resistance” as the primary stumbling blocks in the group’s ability actually to make a difference in protecting children and punishing predatory priests.

“The most significant problem has been reluctance of some members of the Vatican Curia to implement the recommendations of the Commission despite their approval by the pope,” she said. It would appear those roadblocks are as strong as ever.

Journo–terrorism is ‘weaponized journalism’ carried out by the Washington Post, CNN and NYT

What Is The Matrix And How Do We Exit From It?