‘Where are human rights?’ Victims of Blackwater guards in Iraq slam overturning of murder conviction 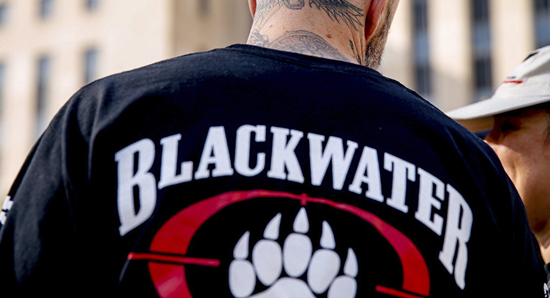 Victims and relatives of those slain or injured in the mass 2007 killing of unarmed Iraqi civilians by Blackwater contractors in Baghdad told RT they are outraged by the recent overturning of a murder conviction by a US court for the chief perpetrator.

In the beginning of August, the US Court of Appeals in the DC circuit ordered a retrial of former Blackwater guard Nicholas Slatten, saying in its ruling that the court was acting beyond its discretion when it did not allow for a separate trial of Slatten. In 2014, Slatten and three other guards – Paul Slough, Dustin Heard and Evan Liberty – were found guilty in the 2007 massacre of civilians in Nisour Square in Baghdad.

Fourteen people died in the incident and scores were injured after the guards opened fire.

Jassim Mohammad Hashim, who was shot in the head during the incident, told RT Arabic that he was shocked when he heard the news of the court mulling to drop the murder conviction.

“It’s absolutely unacceptable that these people have been released. If they are guilty, how could they have been freed? We have all the proof that they are guilty,” Hashim said, adding that due to the severity of his injury he almost completely lost his ability to work and was forced to quit his job.

Hashim was a postal worker in 2007. He said he was carrying mail to a police station when the Blackwater guards started to “fire randomly at unarmed civilians.” At one point during the attack, he approached one of armored vehicles with which Blackwater barricaded the road and was shot in the head.

As he regained consciousness, he managed to reach a police station and told officers about the circumstances of the incident.

“I only remember that people who committed this crime were from Blackwater. Such a crime is impossible to forget… They [Blackwater guards] are criminals, they killed people,” he added.

The court’s reversal in the case struck him off guard not least because he used to trust the US judiciary system.

“We know that law and justice are respected in the United States,” he said, calling on the international community to raise the issue with Washington. “I am against release of these criminals from Blackwater, who took part in the incident on Nisour Square in Baghdad. I demand the international community intervene to prevent the release of those Blackwater employees who are accused of this crime.”

Hussein Sahib Nasir, brother of Mahdi Sahib Nasir who was killed in the incident, accused US of turning backs on declared principle of respect for human rights by considering to soften the sentences.

“My brother was just 24 years old. He was working to provide for our elderly parents. Our family is still suffering a lot until now. Where is the humanism? Where are the human rights? How can they acquit criminals and release them? On what grounds?”, he said.

Recalling the day of his brother’s murder, Hussein said that was he saw at the square resembled wartime hostilities.

“When I got to this place, there was horror, it was like a war was ongoing. Cars were burnt, bullets and blood were everywhere.”

A member of Iraq’s lawyers’ association told RT that while retrial is a normal procedure everyone is entitled to, the Iraqi government should make sure the contractors never tread on Iraqi soil again.

“Also, we demand from Iraq’s Foreign Ministry to file a protest with the US government over these criminals, who killed innocent civilians,” she told RT Arabic.

Slatten was convicted of a first-degree murder and handed a life sentence after being found to be the first to start firing rounds at civilians. His three former colleagues and partners in crime received 30 years behind bars each for multiple counts of voluntary manslaughter and attempted manslaughter. The US attorney’s office said at the time that the perpetrators “acted unreasonably and without justification” while “killing and maiming unarmed civilians” describing the extent of human loss and suffering incurred by the Blackwater guards as “staggering.”

Besides overturning Slatten’s sentence, the court also ordered the revision of the verdicts of his co-defendants, saying that by giving them mandatory 30-year terms the court acted in violation of the constitutional amendment “against cruel and unusual punishment.”

The guards, meanwhile, insist they were acting in self-defense, despite multiple witnesses saying that the fire was unprovoked.

Blackwater, the private military company, operated during the US invasion in Iraq as part of the occupational authorities. After it gained notoriety following the 2007 bloodshed, Blackwater was rebranded Xe Services in 2009. In 2011, it changed the name once again for Academi.

Trump to investigate Mueller for 9/11-anthrax?