Why and How Sound Heals the Body 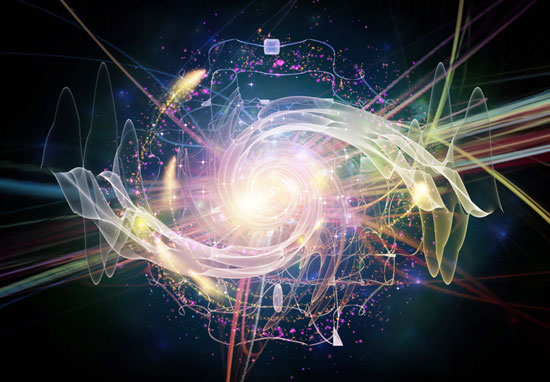 What produces the healing power of sound?

We can feel it when we turn on the radio and our favorite song happens to be playing, or when we sit quietly and listen to the rain. There is a palpable peace when we are absorbed in quiet and a different kind of rejuvenation when we hear the wind in the trees. There is no doubt that sound has subtle, but profound effects on our bodies, minds and spirits. How exactly does sound work, though, to heal us?

Just Like an Orchestra, You Can Tune Your Body

Have you ever listened to an orchestra prepare to play an invigorating symphony? There is a cacophony first with the woodwinds and strings, horns, and timpani making quite a ruckus, but when they tune their instruments precisely, the sound that washes over you like a wave, can bring peace and excitement that surpasses some of the most invigorating practices on earth – like sky diving, or dropping 45 feet into a hidden cave.

“Sound is not unorganized chaos. It is a dynamic but ordered pattern.ˮ Dr. Hans Jenny

The body works in much the same way. If a single instrument (organ, or organ system) is playing its own tune, and not in harmony with the rest of the body, disease is more likely to happen. As sound therapist, Dr. John Beaulieu, ND, PhD explains, “The fundamental principle of Energy Medicine is that an underlying energy field generates physical, emotional, and mental behaviors or symptoms. If we change the energy field, the physical, emotional, and mental behaviors will also change.”

One of the most effective ways to change the energy field is through a science named cymatics. Though he was not the first to discover that sound could heal, Dr. Hans Jenny, M.D. of Basel Switzerland put together some fascinating experiments where we could literally ‘see’ how sound works.

Jenny created ‘cymatics’ when he put sand, fluid or some other powder on a metal plate that was attached to an oscillator. 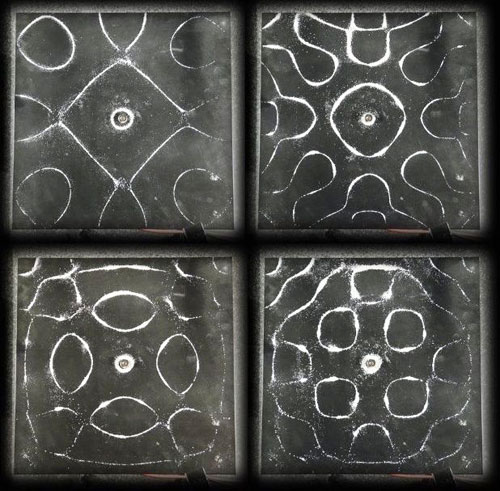 Sand on metal plates, attached to an oscillator, and shaped by sound frequency

By changing the frequencies on the oscillator, Jenny found that sand, or water or whatever substance he was using to create a visible medium for his sound, would morph into some very interesting shapes.

These shapes mimicked the properties of divine geometry, and the higher the frequency, the more complex the shapes would appear to be.

He wrote:
“Since the various aspects of these phenomena are due to vibration, we are confronted with a spectrum which reveals a patterned, figurative formation at one pole and kinetic-dynamic processes at the other, the whole being generated and sustained by its essential periodicity.ˮ

What Jenny was observing was really a simple way of observing matter come to life. Since we now understand, through the emerging field of quantum physics, that patterns emerge via waves of energy, the plates were showing the scientist a similar phenomenon. In ancient Sumerian society, this was a known fact.

This is why practices like mantra were held in high esteem. The seed syllable, OM, for example, causes a certain frequency to imprint upon the ‘matter’ around it, and thus change the energetic field.

“The kind of singing that we do calms the spirit and helps us live in peace with our world and with one another,” says Abbot Philip Lawrence, a scholar of chant who also leads the Monastery of Christ In The Desert – home to an American order of Benedictine monks from Abiquiu, New Mexico.

“Chanting has some strange effect on the brain waves according to various studies,” continues Abbot Philip, but this effect is certainly not the Monks of the Desert’s objective; rather their goal, and that of Gregorian chant, notes Abbot Philip, is “to focus on the words rather than the challenge of voice production or sight reading. It is always our hope that our singing will bring others to peace, inner tranquility and an appreciation of beauty. These values can help create a world in which peace and tranquility prevail.”

Since all matter is just different frequencies of the collapsed wave, or quantum field, then we have the ability to create a different reality with sound.

Sound and the Golden Number

The possibility for great healing can be seen in the science of sound. The picture of the Sri Yantra, a mandala created by sound, and said to be imagined by a yogi in deep meditation, is a representation of one of the oldest sounds in the world.

Some call it a manifestation of divine sound. The triangles that appear in the Sri Yantra are perfectly integrated based on the divine number, Pi, which is also the basis for the golden mean, Phi.

The Greek philosopher, Pythagorus understood sound and divine geometry, and it was written about by Euclid in “Elements” around 300 B.C., by Luca Pacioli, a contemporary of Leonardo Da Vinci, in “De Divina Proportione” in 1509, by Johannes Kepler around 1600.

Many others knew of this ‘cosmic’ mathematics, and its power to heal throughout the ages.

The harmonics of sound work to create order out of chaos.

Disease, you might say, is a form of chaos in the body. According to Dr. Robert Friedman, the connection between the Golden Ratio and ideal health was a no-brainer. During his medial residency in the 1980s, Dr. Friedman began observing the Golden Ratio throughout the human body—on the anatomical, physiological, and molecular levels.

“The deeper I looked,” said Friedman, “the more deeply I discovered this incredible and ubiquitous Code to be embedded throughout the structure and function of the body… it only followed that the more one could harmonize with this grand principle, the more efficient and effortless life could be.”

What is illness?
“Emotional issues that are unresolved block the healing vibrations or cause the disease state to return.” – R Gordon. They are like a crack in a perfect quartz crystal.
Over millennia, those who have studied the science of sound, have come to understand that certain frequencies are very healing for the human body.

Overall, however, you are trying to create resonance “When two systems are oscillating at different frequencies, there is an impelling force called resonance that causes the two to transfer energy from one to another.

When two similarly tuned systems vibrate at different frequencies, there is another aspect of this energy transfer called entrainment, which causes them to line up and to vibrate at the same frequency.” (Richard Gordon)

Certain frequencies are very healing for the human body. When we ‘entrain’ with healing frequencies, our bodies and minds vibrate in harmony. These include:

639 Hz – This is the vibration associated to the heart. It allows feelings of love for self and ‘other’ until there is no longer a distinction. To balance relationships, listen to this frequency.

741 Hz – Said to clean the cells and heal them from exposure to electromagnetic radiation. Helps shift someone into empowerment so they can create the reality they wish to see.

963 Hz – Activates the pineal gland, and aligns the body to its perfect, original state. Of course, there are further frequencies, many of which that are not even within the human range of hearing, but they are healing nonetheless. George Lakhovsky, a Russian engineer understood the power of sound as well.

He understood that certain frequencies would make a living being grow stronger. We hope you are able to find healing in the frequencies that is described, and this introduction to why sound heals will spur you to learn more.

“At the root of all power and motion, there is music and rhythm, the play of patterned frequencies against the matrix of time. We know that every particle in the physical universe takes its characteristics from the pitch and pattern and overtones of its particular frequencies, its singing. Before we make music, music makes us.” – Joachim-Ernst Berendt, The World is Sound.

Why Do The Elites Participate in Child Sacrifice at Bohemian Grove?