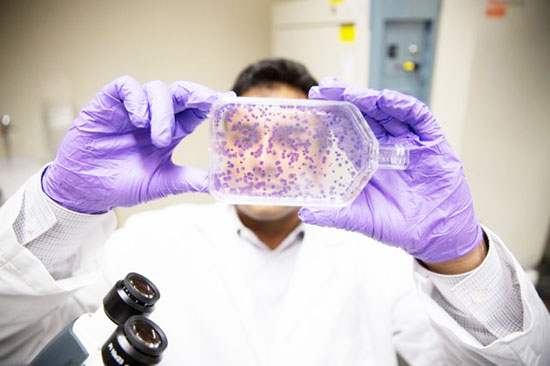 If you have ever walked, ran, ridden, played a sport or grown a moustache in support of large corporate-sponsored drives to cure cancer, you are to be sincerely commended for your time, your effort, and your concern for your fellow human beings. Just know that such efforts have not – and will never – contribute to finding a cure for cancer.

That Western cancer research is organized as a business, whose fundamental motivation is profit, is the subject of numerous excellent books and documentaries, among them Forest Gamble’s Thrive and Ty Bollinger’s The Truth About Cancer.
However in this article we will focus more on the notion that the very scientific model that Western medicine is founded on, and its singular focus on material processes, keeps it inescapably shut off from deeper causes of cancer – and thus renders it useless as an endeavor to actually find a cure.

The National Cancer Institute defines cancer this way: “Cancer is the name given to a collection of related diseases. In all types of cancer, some of the body’s cells begin to divide without stopping and spread into surrounding tissues.”
As we can see, this definition only defines the symptoms of the disease – one or more cells dividing uncontrollably – and does not attempt to identify the root causes of such aberrant cell division nor an overall “character” that would more properly justify grouping a collection of diseases under the broad moniker “cancer”.

Tumors Are Not Cancer

It has been widely observed that our bodies manage cancerous cells on a daily basis. Cells that show early signs of abnormal growth trigger mechanisms to repair those cells, suspend their growth, or fully kill them off.

Unlimited cell growth that leads to a tumor (an abnormal mass of tissue) can only happen if an individual cell goes through a host of discrete genetic mutations to render it incapable of containing its own growth. And even if this occurs, a number of larger-scale mechanisms under the purview of the immune system would need to be rendered ineffective in order for a cancerous cell to grow into a tumor large enough to be detected.

Which begs the question: if a healthy organism supplies a vast array of devices to prevent the incidence of cancer, should we not be looking towards the conditions that cause an organism to become unhealthy in our attempt to ultimately arrive at the cause of cancer and its subsequent cure?

In earlier times, the Western Medical Establishment maintained that cancer is a disease founded on genetic inheritance and random genetic mutation. This put an individual’s environment, mental/emotional state and lifestyle choices completely out of the cancer treatment conversation. Of course this was by design. Cancer sufferers were forced to put the entire business of curing their cancer in the hands of the professional, their “trusted” oncologist.
In recent years, Western medicine has had to slowly (and grudgingly) admit to the impact of environmental factors. They now give lip service to warning the public about potential carcinogens.

However they continue to promote cancer treatment as the domain of the professional, rather than the individuals themselves. A person can quit smoking, for example, or avoid foods that have been labeled carcinogens, but if a cancerous tumor is detected, then the individual is still pressured into succumbing to the oncologist’s recommendations for surgical excision and/or the delivery of toxins. The individual still has no role in their own treatment.

With a more traditional holistic approach, a cancerous tumor is seen more for what it is – a symptom of “dis-ease”, of an organism’s imbalance. The “dis-ease” of the entire organism over a long period of time suppresses the immune system and gives rise to the kinds of genetic mutations that eventually lead to the development of immortal cells.
Unlike the Western approach, factors that are not material are considered as the ultimate cause of the imbalance, including mental and emotional states. Stress, fear, and other negative thoughts and emotions play a part in interfering with and weakening the body’s natural defenses.

With its focus on the material, Western cancer treatment is predicated solely on dealing with the cancerous tumor; hence if the oncologist removes all visible signs of cancerous tumors then the public should conclude that they have done the right thing and they have done all they can.
The weakened or mutilated state of the patient is of no consequence; this is simply the necessary casualty of a job well done. The cancer survivor – if they actually manage to survive the treatment – is no closer to finding out about or even understanding the underlying causes of their cancer in the first place.

A holistic approach is by nature much less invasive. At all costs the patient’s strength and wholeness are preserved. The practitioner puts together a plan in partnership with the patient to restore balance and proper functioning within the organism. The ultimate objective is to empower the organism itself to use its natural defenses to erode and eventually eliminate the tumors.
For the holistic practitioner, then, the very same kinds of tumors in different patients are often seen as having completely different causes, based on the particularities of the whole person. For Western doctors, identical tumors yield the same treatment recommendations, because they are only focused on the tumor itself.

Western cancer research is thus centered on improving ways in which tumors can be removed or put into remission. Even their research into the genetic mutations that give rise to tumors does not look for a cause beyond material processes.
The “Fight Against Cancer” (still the battle cries for motivating people to give their time, effort, and money to Western cancer research) is an old paradigm that presents cancer as an invader from the outside. The Western researcher is cast as the tireless hero who will eventually find the silver bullet that will cure cancer. But this is complete fantasy.

A cancerous cell is the native product of an organism that is no longer functioning according to its original blueprint. The way a cancerous cell develops exhibits a complex intelligence about its host organism, as though it was actually the organism’s attempt to give attention to its own diseased state.

The ultimate cure – beyond the reach of Western medicine – rests in being able to restore whole organisms to a state of balance and harmony, in partnership with the person themselves stricken with the disease. For those of us wanting to actually help find a cure for cancer, we might consider supporting research that is actually seeking to identify its root causes.

The US Government Has Experimented With Controlling Hurricanes (2)