The US Government Has Experimented With Controlling Hurricanes (2)


Weather as a Weapon of War 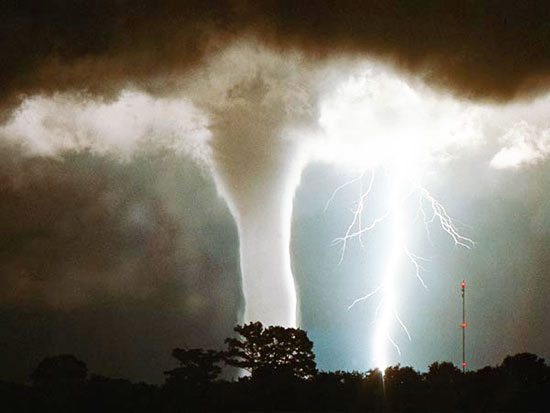 Operation Popeye was a now-declassified attempt by the U.S. military to modify the weather in Southeast Asia from 1967 to 1972. The U.S. military conducted cloud-seeding operations over the Ho-Chi Minh trail during the Vietnam War.

Cloud-seeding typically involves planes flying overhead and spraying silver iodide into the air. The goal in Vietnam was to extend monsoon season and flood out the enemy. It was reported that the operations were “tightly controlled” by Henry Kissinger, who was serving as Secretary of State at the time. Operation Popeye is the first modern example (that we know of) where attempts were made to use weather as a weapon of war.

In April 1976, the New York Times wrote about the situation and the challenges weather modification created:

“Can a nation that tampers with natural balances deny responsibility for what follows? This question, together with recognition that United States policy condemns warfare aimed at civilians, prompted Senator Claiborne Pell in 1973 to introduce a resolution calling for an international treaty to prohibit environmental warfare ‘or the carrying out of any research or experimentation directed thereto.’ The Senate voted 82 to 10 to approve the resolution, which lacks force of law.”

The international treaty referred to is the Environmental Modification Treaty implemented and signed by the United States and other nations to halt global weather modification in the wake of the bad publicity. The Times noted:
“Unfortunately it is far weaker than the Senate resolution. For example, it fails to prohibit military research or development of environmental modification techniques, and allows all ‘peaceful’ work on such things.”

So as long as a nation claims they are conducting peaceful weather modification, they are not violating the treaty. Further, there is no international body to enforce and punish violations of the treaty.

The Times also mentions the Department of Defense’s “Climate Dynamics” program, formerly known as Project Nile Blue. A 1976 report from Milton Leitenberg for the Federation of Scientists elaborates on the origins of Nile Blue. “Beginning in 1969, ARPA, the Advanced Research Projects Agency in the U.S. Department of Defense, began funding a project called Nile Blue (Climate Modification Research)ˮ, Leitenberg wrote.

DARPA is known for developing exotic and emerging technologies for the military. These reports listed above indicated that Project Stormfury and Project Nile Blue were some of the earliest known military operations conducted in the name of manipulating the weather, including hurricanes.

Leitenberg also noted two examples of times the U.S. has been accused of using weather modification on other nations. The was first related to alleged cloud seeding over Cuba in 1969 and 1970 in an alleged effort to destroy the sugar crops.

In the second case, the director of the geographical research center of the University of Mexico implied that the United States was to blame for the effects of Hurricane Fifi over Honduras in 1974.

A story from The Naples Daily News on July 15, 1975, expanded upon this claim:
“Dr. Jorge Vivo, director of the Geographic Research Center of the University of Mexico, said Monday the United States ‘artificially detoured’ the hurricane to Honduras to save Florida’s tourist industry. But Neil Frank, director of the National Hurricane Center in Miami, said Monday night U.S. officials did nothing to alter the hurricane’s path.

Vivo told the newspaper El Sol de Mexico he held the United States responsible for 10,000 deaths and millions of dollars in damage caused by Fifi in the Central American nation. He said he believed U.S. weather authorities used silver iodide against Fifi as part of what he called ‘a systematic action’ to change its course.”

More recently, we have seen accusations that the CIA is manipulating the weather.

In February 2015, while speaking at the annual meeting of the American Association for the Advancement of Science in San Jose, California, Professor Alan Robock discussed the possibility that the CIA is using the weather as a weapon of war.

Robock has conducted research for the intergovernmental panel on climate change (IPCC) in the past. Robock said he was phoned by two men claiming to be from the CIA and asking whether or not it was possible for hostile governments to use geoengineering against the United States. Geoengineering is another form of weather modification that involves a range of different proposals for combatting climate change.

Whatever view you take of these projects, the fact remains that they helped spur the movement towards using computer models to attempt to predict the weather. Quite simply, the history of computer model weather prediction is intertwined with the military’s attempts to modify the weather.

Weather historian James Fleming writes that the two men largely responsible for computer modeling are Vladimir Zworykin, an RCA engineer noted for his early work in television technology, and John von Neumann, a mathematician with the Institute for Advanced Study in Princeton, New Jersey. In 1945, Zworykin was promoting the idea that electronic computers could process and analyze mass amounts of meteorological data and issue accurate forecasts.

“The eventual goal to be attained is the international organization of means to study weather phenomena as global phenomena and to channel the world’s weather, as far as possible, in such a way as to minimize the damage from catastrophic disturbances, and otherwise to benefit the world to the greatest extent by improved climatic conditions where possible,” Zworykin wrote.

According to Fleming, Neumann agreed with this outlook, stating, “I agree with you completely. This would provide a basis for scientific approaches to influencing the weather.”

In 2005, following the destruction left by Hurricane Katrina, USA Today wrote:
“In fact, military officials and weather modification experts could be on the verge of joining forces to better gauge, react to, and possibly nullify future hostile forces churned out by Mother Nature.”

On November 10, 2005, Dr. Joseph Golden, former manager of the National Oceanic and Atmospheric Administration and veteran of Project Stormfury, testified before the Senate Subcommittee on Disaster Prediction & Prevention, warning about the need for hurricane modification.

“After the horrendous devastation and loss of life from Hurricanes Katrina and Rita, I have been asked several times about the possibility of hurricane modification,” Golden stated. “I firmly believe that we are in a much better position, both with the science and the undergirding technology, than we were when Project Stormfury was terminated. The need for a renewed national commitment and funding for weather modification research has become more urgent.”

Golden is also involved the Hurricane Aerosol and Microphysics Program (HAMP). In 2010, he gave a presentation discussing how the Department of Homeland Security asked the NOAA to organize a workshop on possible new scientific theory and approaches to hurricane modification in February 2008.

It seems likely that various agencies of the U.S. government began heavily investing in studying weather modification following the destructive hurricane seasons of 2005 and 2008.

The idea that the U.S. government could be experimenting with controlling or steering hurricanes may sound like fantasy, but the fact of the matter is the government continues to invest in hurricane modification research. Is it possible that the U.S. government, under the direction of the CIA or the DOD, is working with private industries like General Electric to continue experimenting with weather modification technology? Should the public trust that government officials would fess up to secret experiments?