The idea that something strange may be happening on the Moon is not far fetched at all. In fact, given all of the information that’s now available within the public domain on the subject, it’s hard to see how it’s not a fact. 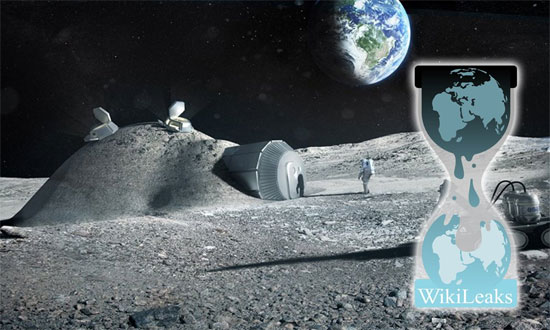 First, let’s draw our attention to a strange WikiLeaks document titled Report That UR Destroyed Secret Moon Base.
Unfortunately, the document is not an electronic document, therefore access to its full contents is not available online. For anybody truly interested in reading the entire thing, a Freedom of Information Act Request (FOIA) may be in order.

Without speculating here, we can conclude that this is what it says it is, a report regarding possible space wars that are taking place in the classified world.
The document title alone not only exposes the reality of these alleged wars, but the possibility of a “Secret Moon Base” belonging to the United States that apparently was in operation until it was destroyed by “UR” (Soviet Union).
You can view it in the WikiLeaks archive here.

So, what other information exists, besides this document, showing that something strange is and has been happening on the Moon? There’s a lot of information, so it’s hard to know where to begin.

First of all, the idea of bases on the Moon have been an open discussion within the US government for a long time, although the information isn’t easy to find, but it’s definitely out there. A document from the government’s own publishing office is a great example. It clearly shows one of the goals of the United States government is to build a base on the Moon, and this is as far back as 1966.

A portion of the document reads, with reference to presidents Kennedy and Johnson in a statement by HON. George P. Miller: “I also believe that we can and will achieve the goal set by Presidents Kennedy and Johnson: a manned landing on the moon before 1970. My own confidence in our rapidly advancing science and technology is such that I can visualize many more dramatic achievements ahead, although I will fix no timetable for them: 1. The exploration of the lunar surface, and possibly the establishment of one or more permanent bases there.”

Furthermore, decades old documents have been declassified discussing this topic, showing just how serious and far possible advancements with these intentions have gone.
Take a look at the screen shot below, taken from the CIA electronic reading room in the form of a memorandum that was addressed to the CIA director regarding “Military Thought (Top Secret)” by Lieutenant General Korenevskiy.

The document above really goes into detail regarding the importance of weaponizing space. This brings to mind another document from WikiLeaks, in the form of an email that was sent to politician John Podesta from Dr. Edgar Mitchell, Apollo 14 astronaut, and Dr. Carol Rosin. It reads as follows: “Dear John, Because the War in Space race is heating up, I felt you should be aware of several factors as you and I schedule our Skype talk. Remember, our nonviolent ETI from the contiguous universe are helping us bring zero point energy to Earth. They will not tolerate any forms of military violence on Earth or in space. The following information in italics was shared with me by my colleague Carol Rosin, who worked closely for several years with Wernher von Braun before his death. Carol and I have worked on the Treaty on the Prevention of the Placement of Weapons in Outer Space, attached for your convenience.”

A declassified report by the Air Force Nuclear Weapons Center from June 1959 shows just how seriously they considered a plan called Project A119. In general, they wanted to investigate the capability of weapons in space as well as gain further insight into the space environment and the detonation of nuclear devices within it.
Interesting to say the least, but it’s important to recognize the intentions behind the letter, and that is the recognition that humans have brought and will continue to bring their destructive ways into space by weaponizing it or attempting to weaponize it.

With all of this documentation, it’s also interesting to look into witness testimonies from credible sources.

In the 1950s, Colonel Ross Dedrickson was responsible for maintaining the inventory of the nuclear weapon stockpile for the AEC, and for accompanying security teams testing the security of the weapons, among many other duties. When it comes to weaponizing space, which is clearly outlined within multiple documents linked above, this is what he had to say: “I also learned about incidents involving nuclear weapons, and among these incidents were a couple of nuclear weapons sent into space that were destroyed by the extraterrestrials… At the very end of the 70s and the early 80s, we attempted to put a nuclear weapon on the Moon and explode it for scientific measurements and other things, which was not acceptable to the extraterrestrials. They destroyed the weapon before it got to the Moon.”

Dedrickson is one of hundreds of whistleblowers with verified, credible and impressive backgrounds to speak up about an extraterrestrial presence. In that same interview, he went on to state that: “A spacecraft went to the rescue of Apollo 13, and they accompanied Apollo 13 on their voyage around the Moon back to Earth. And on two occasions they thought they might have to transfer the crew to their spacecraft, but they saw them safely back to Earth.”

This may explain why several astronauts have also been quite outspoken about an extraterrestrial presence, like Edgar Mitchell, Brian O’Leary, Story Musgrave, Gordon Cooper and many others.

Another document from 1965 regarding the CIA keeping tabs on Soviet space plans reads as follows (keep in mind, this was more than 50 years ago): 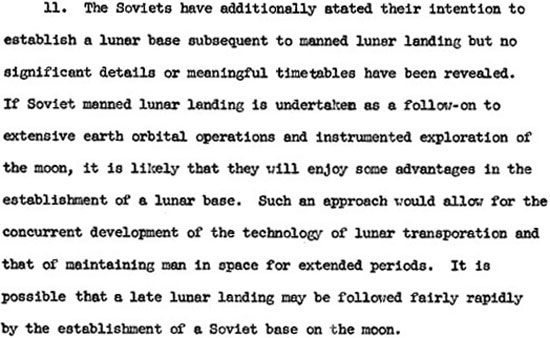 Below is an interesting quote from Carl Sagan: “It is not out of the question that artifacts of these visits still exist, or even that some kind of base is maintained (possibly automatically) within the solar system to provide continuity for successive expeditions. Because of weathering and the possibility of detection and interference by the inhabitants of the Earth, it would be preferable not to erect such a base on the Earth’s surface. The Moon seems one reasonable alternative. Forthcoming high resolution photographic reconnaissance of the Moon from space vehicles – particularly of the back side – might bear these possibilities in mind.”

George Leonard’s 1976 book, Somebody Else is on the Moon, and Fred Steckling’s 1981 book, We Discovered Alien Bases on The Moon, also come to mind when discussing this subject.

The study makes a great point when it comes to the extraterrestrial hypothesis: “A decidedly conservative mainstream scientific establishment often rejects anomalies based on subject matter alone, i.e., there cannot be alien artifacts on the Moon because there are no alien artifacts on the Moon (or other planets). Such a view is an example of circular reasoning, based on the belief that extraterrestrials do not exist, or if they do exist that they could not have traveled to our solar system.”

The truth is “there is abundant evidence that we are being contacted, that civilizations have been visiting us for a very long time.” – Dr. Brian O’Leary, former NASA astronaut and Princeton Physics Professor.

When it comes to the Moon, man-made bases may not be the only ones there.
As far as our own bases are concerned, Karl Wolfe, who was a precision electronics photograph technician at Langley Air Force Base, became well-known when he provided his testimony at National Press Club in Washington, D.C. as part of Dr. Steven Greer’s disclosure project.

Wolfe’s testimony revealed that he was taken into a dark room where images from NASA’s Lunar Orbiter were being developed and stitched together into composite images called “mosaics.”
“They were doing 35 mm strips of film at the time which were then assembled into 18 1/2 x 11 mosaics. Those strips were from successive passes around the Moon and they would build up a photograph ,” Wolfe said.
“We walked over to one side of the lab and he said, ‘By the way, we’ve discovered a base on the backside of the moon.’”

Dr. John Brandenburg, the Deputy Manager of the Clementine Mission to the Moon, which was part of a joint space project between the Ballistic Missile Defence Organization (BMDO) and NASA, has also made some fascinating revelations. The mission discovered water at the Moon’s poles in 1994. But, according to Dr. Brandenburg, the Clementine Mission had an ulterior agenda: “The Clementine Mission was a photo reconnaissance mission basically to check out if someone was building bases on the Moon that we didn’t know about. Were they expanding them?… Of all the pictures I’ve seen from the Moon that show possible structures, the most impressive is a picture of a miles-wide recto-linear structure. This looked unmistakably artificial, and it shouldn’t be there. As somebody in the space defence community, I look on any such structure on the Moon with great concern because it isn’t ours, there’s no way we could have built such a thing. It means someone else is up there.” (Quote from the documentary Aliens on the Moon.)