Monisha Rajesh is not your typical person. She writes for the Guardian, the New York Times, the Financial Times, and the Sunday Times. Right after Donald Trump won the presidential election, Rajesh was busy tweeting things like this: “It’s about time for a presidential assassination.”[1]

There has been at least one assassination attempt to kill Trump.[2] But should that really be the attitude or action of people who hubristically declare that they are agents of democracy and freedom? Why do their lips say “democracy” and “freedom” but their actions say the opposite? Why are they creating chaos in major cities in America? Why can’t they follow Hillary’s sensible comments that decent Americans and reasonable people need to give Donald Trump a chance?

Hillary was on the right side of rationality when she said: “I congratulated Donald Trump and offered to work with him on behalf of our country. I hope that he will be a successful president for all Americans… Donald Trump is going to be our president. We owe him an open mind and the chance to lead. Our constitutional democracy enshrines the peaceful transfer of power. We don’t just respect that. We cherish it. It also enshrines the rule of law; the principle we are all equal in rights and dignity; freedom of worship and expression. We respect and cherish these values, too, and we must defend them.”

The election is over. One party has lost, and we all need to relax and give the new government a chance to lead. What he will do should be vetted out in the future. But it is irresponsible and indeed comical for violent protesters to create chaos across America just because they are disappointed about what happened.[3] Violent protesters have recently vandalized “19 cars at a dealership in Northeast Portland… Protesters then headed west, over the Broadway Bridge and into the Pearl District, where the windows of several businesses were smashed.”[4] 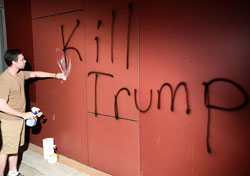 At least one police car was torched in Oakland, California. “F*** Trump” or “Kill Trump” graffiti were reportedly set alight. “And thousands more filled streets in Los Angeles before taking over the 110 Freeway while other protesters gathered outside City Hall, lighting fires and waving Trump heads on sticks… Cher and Madonna were among the NYC protesters, with Cher telling one supporter they needed to «fight».”[5]

In response, Trump tweeted: “Love the fact that the small groups of protesters last night have passion for our great country. We will all come together and be proud!”
The simple questions are these: how did we really get here? And is it really helping society when people start burning police cars and destroying private properties?

I guess it doesn’t matter anymore, since the people who have been bamboozled by the mass-media are now abandoning logic, reason, and ultimately logos and are opting for something else. And this is not just in America. It is largely in South Korea as well, where the media has largely became a propaganda machine when it came to reporting on the US presidential election.

An American journalist from the alternative media, Jonas Alexis, has recently had a long dialogue with a group of students who have been feeding on what the media has been telling them. After he put some of those political issues into proper context, one student exclaimed, “You are an absolutist!”.

The journalist tells that he just couldn’t hold his laughter because the student was basically undermining his own mine. He really made the job easy. Alexis recalls that he was tempted to ask him, “Are you absolutely sure?” because he thought it would have been hilarious to see how the student responded. But he refrained himself a bit and asked the student a different and elementary question because he was a math genius: “Do you believe that 2 + 2 is four?”. “Of course” he replied. “Do you believe that any deviation from that is categorically false?”
“Yes” he again said. 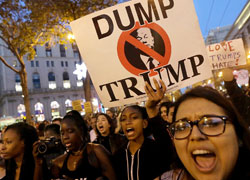 “So” the journalist said with a smile, “according to your own logic, you are an ‘absolutist.’ You see, the question we all must ask ourselves is this: is this political or ideological worldview true or not? And if it is true, when we must follow it all the way! If it is false, then it must be rejected.”

The student struggled to get out of that interesting puzzle because he was operating outside the moral universe, which basically says that truth is absolute. The journalist actually was drilled for more than an hour about the political system in America and tells he felt that he was in the middle of World War III.

What is happening in South Korea with respect to the political system in America is that students largely do not understand how politics works in America and how the Powers That Be can wield a sword and turn the political dial in their favor. It was a little challenging for them to understand some of these things because the media presents no alternative views at all.

The overarching point throughout the past few months is that both Democrats and Republicans cannot exclude morality or practical reason – which is based on metaphysical logos – in their weltanschauung. And any system that does exclude practical reason from the political sphere will end up promoting contradiction and indeed nonsense.

Democracy cannot exist without laws, and laws cannot really exist without the moral order. The moral order, as we all know, is based on universal principles which are binding and transcendent. It is our defense against tyranny, oligarchy, and against those who want to cripple the economy at the expense of the poor and needy. 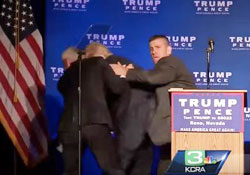 Any party that excludes the moral order from any serious discussion is actually heralding its own political death. And burning cars and creating chaos in America is actually not part of the moral order, despite the fact that Jesse Benn of the Huffington Post risibly declared in June 2016 that “violent response to Trump is as logical as any.”[6]

Hopefully violent protesters will start learning to live with people with whom they disagree. Hopefully they are learning that the whole world is watching them acting like monkeys in the streets of America. Finally, by appealing to violent means to get things done, the masses are inexorably following the dictates of the Khazarian Mafia and their marionettes, who for centuries have used subversive movements to deconstruct the moral order and political order.