44 Reasons Cell Phones Can Cause Cancer (1) 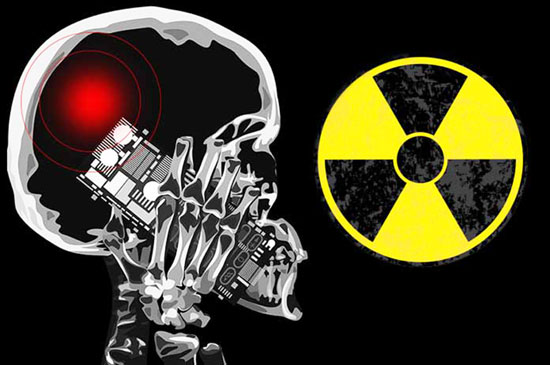 Is there a connection between cell phones and cancer? Here are 44 reasons to believe that cell phones can cause cancer.
Cell phones emit microwave radio-frequency radiation. Fact.
This radiation has the ability to penetrate our bodies. Fact.
Our governments do virtually nothing to protect us from these dangers. Fact.
And yet there is strong evidence and multiple peer reviewed studies that indicate that cell phones cause cancer and other diseases. Take a look for yourself at these facts. But first let’s just consider what cancer is.

The National Cancer Institute says “Cancer is a term used for diseases in which abnormal cells divide without control and are able to invade other tissues … all cancers begin in cells … cells grow and divide in a controlled way to produce more cells as they are needed to keep the body healthy. When cells become old or damaged, they die and are replaced with new cells. However, sometimes this orderly process goes wrong. The genetic material (DNA) of a cell can become damaged or changed, producing mutations that affect normal cell growth and division. When this happens, cells do not die when they should and new cells form when the body does not need them.”

So cancer typically involves abnormal cell division and DNA damage and in some cases cells may form a mass of tissue called a tumor.

In the studies done to date cell phone radiation exposures are principally linked to two types of brain tumor: gliomas and acoustic neuromas. Gliomas, a type of tumor that starts in the brain or spine are typically malignant. Gliomas are particularly deadly. Most people survive only 1 to 3 years after diagnosis. Acoustic neuromas, though non-malignant (low-grade cancer), are in many cases life threatening given that they are an intracranial tumor.

1. Cellular Damage: Telecoms giant T-Mobile in Germany commissioned an independent study to review all relevant research on the health risks from wireless telecommunications. It was concluded that,
“On the cellular level, a multitude of studies found the type of damage from high frequency electromagnetic fields which is important for cancer initiation and cancer promotion.”

2. Significantly Increased Risk of Glioma: Gliomas are becoming increasingly common. The $25 million Interphone Study found that:
“… regular use of a cell phone by adults can significantly increase the risk of gliomas by 40% with 1640 hours or more of use (this is about one half hour per day over ten years).”

3. Tumor Risk on Cell Phone Side of Head: Again from the Interphone Study – currently the big daddy of cell phone radiation studies it being the largest and longest study on the link between cell phones and brain tumors – it also found, “tumors were more likely to occur on the side of the head most used for calling.”

4. Harmful Association Between Cell Phone Radiation and Tumors: A review of 23 epidemiological studies by 7 scientists on the link between cell phones and cancer concluded, “harmful association.” One of the reports authors commenting the study results said, “although as a whole the data varied, among the 10 higher quality studies, we found a harmful association between phone use and tumor risk. The lower quality studies, which failed to meet scientific best practices, were primarily industry funded.”

6. Temporal Lobe & Glioma Risk: A French study found evidence of an increased risk of glioma and temporal lobe tumors. The study found that, “risks were higher for gliomas, temporal tumours, occupational and urban mobile phone use.” According to EMF watchdog Powerwatch this is an important paper, “that confirms existing studies and which should help move the IARC RF evaluation strongly towards a Group 2A – ‘probable human carcinogen’.”

7. Increased Risk of Acoustic Neuroma in Long-Term Users of Cell Phones: A study on 790,000 middle aged women in the UK found that, “women who used cell phones for ten or more years were two-and-a-half times more likely to develop an acoustic neuroma. Their risk of acoustic neuroma increased with the number of years they used cell phones.”

8. Increased Risk of Acoustic Neuroma: Research conducted by Lonn suggests, “an increased risk of acoustic neuroma associated with mobile phone use of at least 10 years’ duration.”

9. Brain Tumor Risk is Higher on ‘Cell Phone’ Side of Head: A research paper that reviewed 11 studies found, “a link between prolonged cell phone usage and the development of an ipsilateral [same side of head as cell phone] brain tumor.”

10. Meningioma: This Swedish study looked at adult brain tumor cases diagnosed over a two year period. Although the study concluded that, “no conclusive evidence of an association between use of mobile and cordless phones and meningioma was found.” The studies authors did say, “an indication of increased risk was seen in the group with highest cumulative use.”

11. Malignant Brain Tumors: Recent work by Hardell looked at long-term use of mobile and cordless phones. In conclusion it was found that, “this study confirmed previous results of an association between mobile and cordless phone use and malignant brain tumors. These findings provide support for the hypothesis that RF-EMFs play a role both in the initiation and promotion stages of carcinogenesis.”

12. Cancer of the Pituitary Gland: The pituitary gland, considered by many to be the “master gland” of the body, is a pea sized organ located in the middle of the base of the brain that produces hormones that play a major role in regulating vital body functions and general well-being. This study (already referenced above) also found that, “the risk of cancer of the pituitary gland more was more than twice as high among women who used a cell phone for less than five years as compared to never users.”

13. Thyroid Cancer: The thyroid gland is situated in the neck. Using a cell phone against your ear exposes your thyroid to cell phone radiation. An Israeli study observing that, “the incidence of thyroid cancer has been on the rise in Israel for more than a decade which matches the rise in the use of cellphones” collected human thyroid cells from healthy patients and subjected them to radiation. The study found, “evidence of changes in thyroid cells in response to electromagnetic radiation.” 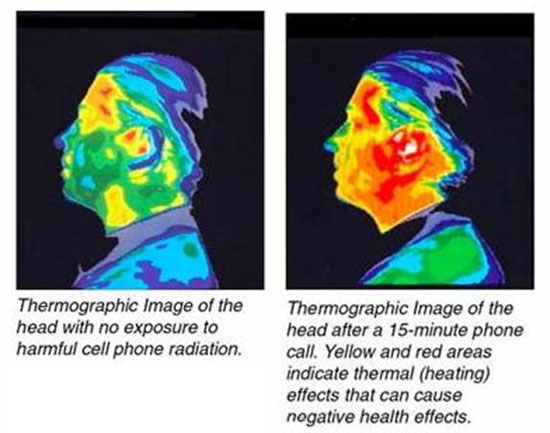 14. Melanoma Risk: Melanoma is a cancer that starts in a certain type of skin cell. A Swedish study found “a very clear association between increasing use of mobile phones and increasing rates of head melanoma in Nordic countries.”

16. Oral Cancer: An Israeli study on 460 cases of parotid gland tumors found, “based on the largest number of benign PGT patients reported to date, our results suggest an association between cellular phone use and PGTs [parotid gland tumors].” The parotid is the salivary gland near the cheek where many users hold their cell phone.

17. Parotid Malignant Tumors: Another Israeli study analyzed deaths as recorded on the National Cancer Registry over a 36 year period found, “the total number of parotid gland cancers in Israel increased 4-fold from 1970 to 2006, whereas other major salivary gland cancers remained stable.”

18. Leukemia: A comprehensive review of over a dozen studies including studies on exposures from cell tower radiation, TV and Radio broadcast towers concluded, “cancer, especially brain tumor and leukemia, but all other cancers also.”

19. Lymph Node Cancer: In an Australian study one hundred mice were exposed to RF radiation for two 30-minute periods per day for up to 18 months. The authors called the increased incidence of lymphoma “highly significant.” They added that “it is very unlikely that the faster onset of cancer was due to chance.”

20. Multifocal Breast Cancer: American researchers studied four young women with breast cancer. They found that, “all patients regularly carried their smartphones directly against their breasts in their brassieres for up to 10 hours a day, for several years, and developed tumors in areas of their breasts immediately underlying the phones.”

21. Eye Cancer: A German Study has established a link between uveal melanoma and cell phone radiation and similar exposures. The study “found an elevated risk for exposure to radiofrequency-transmitting devices.” Another study found ocular symptoms and sensations in long term users of mobile phones.

22. Diverse Cancerous Tumors: A Brazilian Study established a direct link between various cancer deaths such as tumors in the prostate, breast, lung, kidneys and liver in Brazil’s third largest city, and cell phone tower radiation exposures. The study found that, “more than 81 percent of people who die in Belo Horizonte by specific types of cancer live less than 500 meters away from the 300 identified cell phone antennas in the city”.

This same study also lists more than a dozen other research papers that have found a link between different cancers and cell phone/cell tower radiation exposures.

24. Brain Cancer Incidence Increases Over Time (U.S.): Another U.S. study of brain cancer incidence trends in relation to cell phone use in the United States found, “there was a statistically significant increasing trend between 1992 and 2006 among females but not among males. The recent trend in 20–29-year-old women was driven by a rising incidence of frontal lobe cancers.”

25. Brain Cancer Incidence Increases Over Time (Europe): Studies carried out in Norway, Finland and the U.K. have identified a similar trend of an increase in the incidence of brain cancer over time. In the UK study the incidence of malignant brain tumors close to where you hold your phone was highlighted.

26. Blood-Brain Barrier (BBB) Permeability: The BBB is a membrane which prevents toxic materials from the blood from entering the brain. It was first discovered in 1975 that RF radiation causes the BBB to leak, since then at least a dozen laboratories around the world have corroborated this effect. There’s no consensus on the link between BBB damage and cancer but some studies elude to this.

27. Brain Cell Loss: A Turkish study on adult female rats that were exposed to a 900 MHz electromagnetic field found that, “EMF exposure caused a significant decrease of the … cell number … additionally, cell loss can be seen.” In their conclusions the researchers drew parallels between these exposures and teenagers’ brains that are exposed to cell phone radiation.