7 Secrets about the World – Revealed through Syrian War 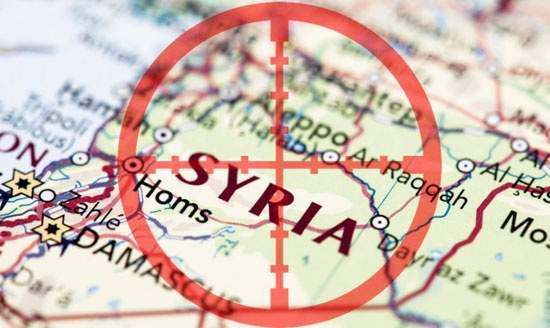 Usually one has to read hundreds of books to fathom how the puppet masters of the world work, but once in a while, there is a single event that explains it all. The war in Syria is one of those. Understand the Syrian war, will lead to the realization on how pervasive propaganda is, how easy it is to manipulate people, how powerful the globalists are, how and why wars are manufactured, and how cynical and ruthless nations are. Here are some of the revelations from the Syrian war.

Media all around the world are controlled by the same interests

In the U.S., six corporations control 85% of the media. However, in fact, they are all just one group of elites. Globally, pretty much all the corporate media now are controlled by the same interests. This is really hard for most people to digest. The war in Syria, however, made this very clear.

With the exception of Russia’s RT, every influential newspaper and TV channel in the world has repeated the same propaganda, talking points, and the narratives with impeccable coordination. As an example, the fake story of the Aleppo boy was not only repeated all over the world, but was on the front page, on the same day, all over the world!

Media-Entertainment can peddle the biggest whoppers

Psychologically, it’s difficult for people to believe that every media outlet would lie. Don’t americans live in a country with free media and amazing journalists and pundits? Well, it’s called the Overton Window – a narrow, strict boundary within which journalists can bravely discuss anything they want. Every MSM in the world lied about Syria.

To start with, the media wouldn’t even think about revealing the geopolitical and financial reasons behind the Syrian war – Qatar oil/gas pipeline through Syria to Europe, Israel’s land and oil grab in Golan Heights, Saudi Arabia’s obsession with preventing a Shiite Crescent (Iran-Iraq-Syria-Lebanon) etc.

The media’s job is to sell war. To that end, they uniformly lied about Assad being unpopular, when separate polls by CNN and Zogby showed him as the most popular leader in the Arab world in 2009.

They lied about how the protests started (it was engineered by CIA & Muslim Brotherhood) and who was fighting Assad (fact: there are no “moderate Syrian rebels” – the opponents are undemocratic Islamists, psychotic foreign terrorists, Al Qaeda and ISIS).

The difference between Assad and the rebels can be summed up in this one picture that showed schools in areas controlled by Assad versus the “moderate rebels”:

A romanticized and fictitious story of peaceful people fighting Assad was peddled for six years (fact: the fighters had billions of dollars worth of sophisticated, lethal weapons). Once in a while, the New York Times or The Guardian would slip in the truth, but the lies always overwhelmed and drowned the truth.

Other arms of the globalists – Twitter, Netflix, HBO etc. – also made their own contributions to the insane propaganda and lies.

US/UK governments gave $100 million to Al Qaeda and created a slick hoax called the White Helmets that even won an Oscar.

Then there was Bana Alabed, the 7-year-old Syrian girl from Aleppo who could barely speak/understand English, but tweeted Neocon talking points with the perfect English of a NY Times reporter.

She has a verified Twitter account that is followed by celebrities and world leaders, has been interviewed by every MSM, and now has a book deal. If you tell a big enough lie and keep repeating it, people will believe it.

Entire political establishment can lie about something

There are so many liberals who can’t even imagine for a moment that Obama and Hillary would have attacked Libya and Syria for anything other than humanitarian and noble reasons. Even Bernie Sanders supported both those wars. All these just show how strong the military-industrial complex and the globalists are.

The only politician to speak the truth about US arming terrorists is Tulsi Gabbard, who introduced a bill that merely said that the U.S. should not support terrorists. Guess how many Congressmen supported her? 13 out of 538. Rand Paul introduced the same bill in the Senate and hasn’t gotten a single co-sponsor.

Wars can be easily manufactured

If the media and the politicians are corrupt, the American people are naive. They believe the myth of humanitarian wars and have no knowledge of history or geopolitics.

How many Americans are aware of all the attempts by the U.S. Deep State since the 1950s to topple the government in Syria? They also don’t like to think critically. They saw some pictures of dead children on TV, and they approved Trump bombing Syria. They never ask basic questions that would be required in a crime scene regarding evidence, expert analysis, motives, means and opportunity. It’s no wonder that America is in a perpetual state of war.

Any foreign leader can be demonized, any nation can be destroyed

The news and narratives heard all over the world were entirely from the point of view of the US/Western establishment. That Assad could have been a nice guy or was well-liked by his own people was just too shocking.

It doesn’t even cross people’s minds that they should learn about, or listen to a foreign leader. Americans believe one-dimensional caricatures for foreign leaders, so the verdict against a foreign leader/country will always be guilty.

Wars can be a secret project of multiple nations

Syria was probably the first war in modern history when globalists used a joint project of multiple nations to wage a war. In this evil project of destruction:

– The CIA used its base in Jordan to train the rebels. The US also sold billions of dollars of weapons to Al Qaeda and ISIS through the Gulf countries.
– Saudi Arabia and Qatar sent cash and American weapons to Turkey, which funneled them to terrorists within Syria.
– Turkey also invaded Syria and simply looted thousands of factories in Aleppo. Later, Turkey, bought billions of dollars of stolen oil at a discount from ISIS and then sold it to Israel.
– Israel has been a silent partner, coordinating the war behind the scene, helping the rebels in Golan Heights, and very likely assisting ISIS as well.
– UK spent millions of dollars on Al Qaeda’s paramedics – White Helmets; UK also set up a satellite TV station in 2009 to broadcast anti-Assad programs.
– France bribed many Syrian generals and leaders and lured them to defect. France also gave money and weapons to Syrian terrorists.

Islamic terrorists are proxy tools for the West

The extensive use of Islamic terrorists from 2011 to 2017 to bring about regime change in Syria should shock the conscience of any American. The Mujahideen project never went away, and the Syrian war only proved that Islamic terrorists will continue to act as proxy warriors on behalf of the globalists.

Americans have a ruthless, sophisticated and cunning system that thrives on conflicts and wars which, in turn, depend on a gullible population that simply consumes news and opinions fed by mass media and the politicians.

If people truly understood the war on Syria, they could have seen the scam that was being perpetrated.

Ways to use honey in home remedies