Sustainable Development: The Transformation of the Western World 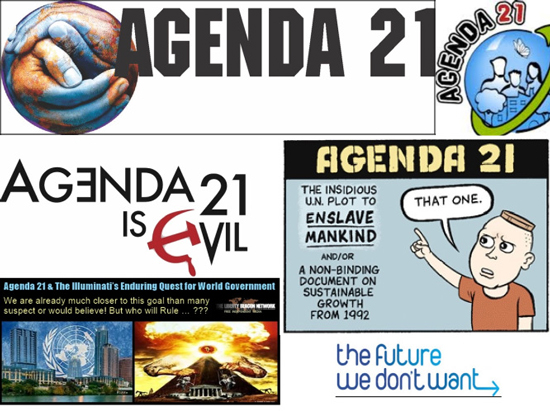 Some think that the planet is in danger of global warming and over consumption. They really believe that the only way to fix the problem is to control the flow of resources and wealth, which literally means changing human civilization and the way we live.

This article is from the US, but the principles of Agenda 21 are global – it came from the UN. The problem is that it requires a forced transformation of our entire society to comply, and that ultimately leads to a thirst for power and top-down control – that will eventually lead to tyranny.
In his book, Earth in the Balance, Al Gore warned that a “wrenching transformation” must take place to lead Western countries away from the “horrors of the Industrial Revolution”. The process to do that is called Sustainable Development and its’ roots can be traced back to a UN policy document called Agenda 21, adopted at the UN’s Earth Summit in 1992.

Sustainable Development calls for changing the very infrastructure of the nation, away from private ownership and control of property to nothing short of central planning of the entire economy – often referred to as top-down control.

Where and when did the term Sustainable Development originate?

The term “sustainable development” was born in the pages of Our Common Future, the official report of the 1987 United Nations World Commission on Environment and Development, authored by Gro Harlem Brundtland, Vice President of the World Socialist Party.

The term appeared in full force in 1992, in a United Nations initiative called the U.N. Sustainable Development Agenda 21, or as it has become known around the world, simply Agenda 21. It was unveiled at the 1992 United Nations Conference on Environment and Development (UNCED), ballyhooed as the Earth Summit.
In fact, the Earth Summit was one of the provisions called for in the Brundtland report as a means of implementing Sustainable Development around the world. More than 178 nations adopted Agenda 21 as official policy. President George H.W. Bush was the signatory for the United States.

What is Sustainable Development?

The 1989 Webster’s Dictionary defines “Sustainable Yield” as “a requirement that trees cut down in a forest area be replaced by new plantings to ensure future lumber supplies”. That’s what most people think Sustainable Development means.
Proponents of Sustainable Development argue that it is about preserving resources for future generations. What’s wrong with that? Nothing in theory.
That would be sustainable with a small “s”. Just common sense usage of natural resources. The problem is, major forces now promoting it intend for Sustainable Development to be spelled with a capital “S”. They intend for a socio-economic political movement that probes, invades and changes every aspect of human civilization.

And that’s the problem.
Imagine a world in which a specific “ruling principle” is created to decide proper societal conduct for every citizen.
That principle would be used to consider regulations guiding everything you eat, the kind of home you are allowed to live in, the method of transportation you use to get to work, what kind of work you may have, the way you dispose of waste, perhaps even the number of children you may have, as well as the quality and amount of education your children may receive.
Sustainable development encompasses every aspect of our lives.
According to its authors, the objective of sustainable development is to integrate economic, social, and environmental policies in order to achieve reduced consumption, social equity, and the preservation and restoration of biodiversity. 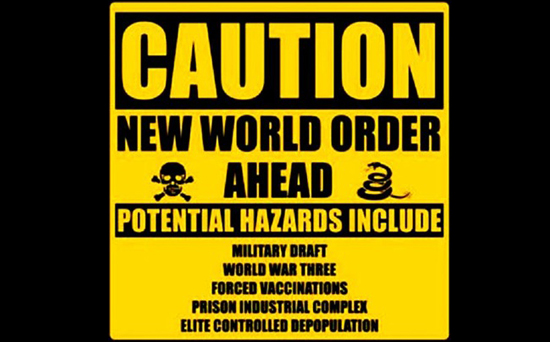 Lie: Sustainability is about protecting the environment.
Reality: It is a political movement to replace capitalism with government control of everything.

Lie: CO2 is a pollutant.
Reality: CO2 is the gas that all plants and crops breathe.

Lie: Climate change is catastrophic and anthropogenic and must be addressed through CO2 abatement schemes.
Reality: Climate change is a man made hoax with numerous provable data points and thousands of scientists going on the record – which is ignored by the cabal-controlled mainstream media.

Lie: Subways and mass transit can replace cars.
Reality: They cannot. If they could, there would be no cars in Manhattan.

The Sustainablists (promoters of Sustainable Development agenda) insist that society be transformed into feudal-like governance by making nature (which they want to control through geoengineering) the central organizing principle for our economy and society, not human need or wants. As such, every societal decision would first be questioned as to how it might affect the environment.
To achieve this, Sustainablists’ policy focuses on three components; land use, education, and population control and population reduction.

Here is a direct quote from the report of the 1976 UN’s Habitat I conference which said: “Land… cannot be treated as an ordinary asset, controlled by individuals and subject to the pressures and inefficiencies of the market. Private land ownership is also a principle instrument of accumulation and concentration of wealth, therefore, contributes to social injustice.”

Some officials claim that Sustainable Development is just a local effort to protect the environment and contain development – just your local leaders putting together a local vision for the community.
Yet, the exact language and tactics for implementation of Sustainable Development are being used in nearly every city around the globe from Lewiston, Maine to Singapore.
Local indeed. 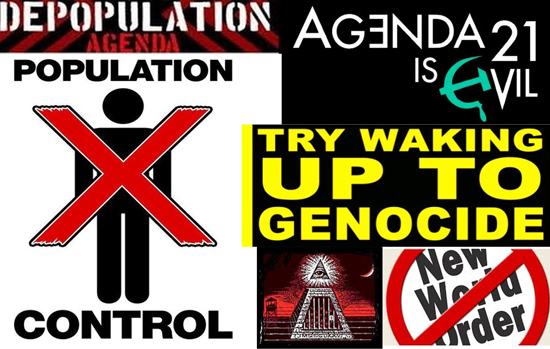 This goal is exactly the policies that are written into such legislation as Cap and Trade, the Clean Air Act, and the Clean Water Act.
It is also the policy behind the many corporate commercials seen nightly on television which advocate “Going Green”.
They are all part of the efforts to modify consumer behavior to accept less, deal with higher energy prices, restrict water use and place severe limitations on use of private property – all under the environmental excuse.

And one of the most destructive tools used to enforce Sustainable Development policy is something called the “precautionary principle”.
That means that any activities that might threaten human health or the environment should be stopped – even if no clear cause and effect relationship has been established – and even if the potential threat is largely theoretical.
That makes it easy for any activist group to issue concerns or warnings by news release or questionable report against and industry or private activity, and have those warnings quickly turned into public policy – just in case.

Many are now finding non-elected regional governments and governing councils enforcing policy and regulations.
As these policies are implemented, locally elected officials are actually losing their own power and decision-making ability in their elected offices. More and more decisions are now being made behind the scenes in non-elected “sustainability councils” armed with truckloads of federal regulations, guidelines, and grant money.

According to its authors, the objective of Sustainable Development is to integrate economic, social, and environmental policies in order to achieve reduced consumption, social equity, and the preservation and restoration of biodiversity.
The Sustainable Development logo used in most literature on the subject contains three connecting circles labeled along the lines of Social Equity; Economic Prosperity; and Ecological Integrity (known commonly as the 3 E-s).

Most recently, the theory of social justice has been used to justify government takeover of health care. Today, the phrase is used throughout Sustainablists’ literature.
The Sustainablists’ system is based on the principle that individuals must give up “selfish wants” for the needs of the common good, or the “community”.
This is the same policy behind the push to eliminate our nation’s borders to allow the migration of those from other nations into the United States to share the individually-created wealth and the taxpayers-paid government social programs.
Say the Sustainablists: “Justice and efficiency go hand in hand”.
“Borders”, they say, “are unjust”.

Under the Sustainablist system, private property is an evil that is used simply to create wealth for a few. So, too, is business ownership. Instead, “every worker / person will be a direct capital owner”.
Property and businesses are to be kept in the name of the owner, keeping them responsible for taxes and other expenses, however control is in the hands of the “community” (government).

Under Sustainable Development individual human wants, needs, and desires are to be conformed to the views and dictates of social planners.
Harvey Ruvin, Vice Chair of the International Council on Local Environmental Initiatives (ICLEI) said: “Individual rights will have to take a back seat to the collective” in the process of implementing Sustainable Development. 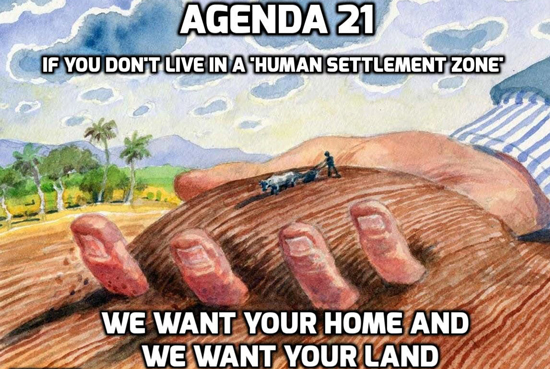 Sustainable Development’s economic policy is based on one overriding premise: That the wealth of the world was made at the expense of the poor. It dictates that, if the conditions of the poor are to be improved, wealth must first be taken from the rich. [But this mandate does not apply to not the “elite”, of course].

Consequently, Sustainable Development’s economic policy is based not on private enterprise, but on public / private partnerships.
In the free-market of the past, most businesses were started by individuals who saw a need for a product or service and they set out to fill it. Some businesses prospered to become huge corporations, some remained small “mom and pop” shops, others failed and dissolved.

Most business owners were happy to be left alone to take their chances to run their businesses on their own, not encumbered by a multiplicity of government regulations.
If they failed, most found a way to try again. In the beginning of the American Republic, government’s main involvement was to guarantee they had the opportunity to try.

In order to give themselves an advantage over competition, some businesses – particularly large corporations – now find a great advantage in dealing directly with government, actively lobbying for legislation that will inundate smaller companies with regulations that they cannot possibly comply with or even keep up with.