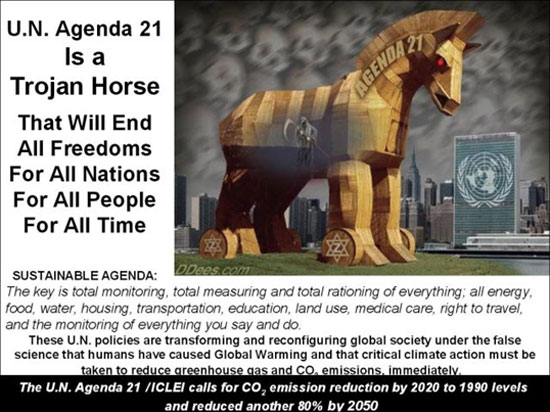 Agenda 21 is a comprehensive plan of action to be taken globally, nationally and locally by organizations of the United Nations System, Governments, and Major Groups in every area in which human impacts on the environment.
Agenda 21, the Rio Declaration on Environment and Development, and the Statement of principles for the Sustainable Management of Forests were adopted by more than 178 Governments at the United Nations Conference on Environment and Development (UNCED) held in Rio de Janeiro, Brazil, 3 to 14 June 1992.

The Commission on Sustainable Development (CSD) was created in December 1992 to ensure effective follow-up of UNCED, to monitor and report on implementation of the agreements at the local, national, regional and international levels. It was agreed that a five year review of Earth Summit progress would be made in 1997 by the United Nations General Assembly meeting in special session.

“The common enemy of humanity is man. In searching for a new enemy to unite us, we came up with the idea that pollution, the threat of global warming, water shortages, famine and the like would fit the bill. The real enemy then is humanity itself.” – From the Club of Rome’s The First Global Revolution p. 75, 1993