“There is freedom of speech in my world. Undoubtedly, websites such as Breitbart News and the Axis of Good… are legal media. Nevertheless, one could ask brand names whether they… are aware that their banner ads appear on these particular websites and represent their brand there.”
This type of “asking”, of course, roughly corresponds to the mafia “asking” the pizzeria owner if he has fire insurance. 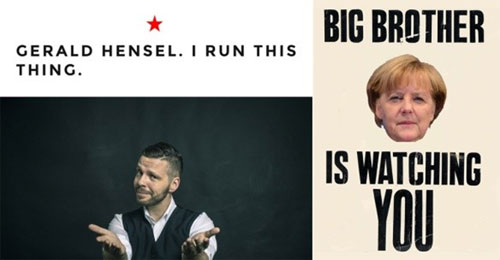 Hensel also considerately provided detailed instructions for his readers. Those employed by an enterprise should check whether the websites that he deemed “right-wing” are registered on a blacklist. Employees of advertising agencies should form a team, with Hensel and other authoritarians, for internet censorship: “If your career in a media agency has propelled you a little higher up the hierarchy, you might be able to bring up the topic at the next media get-together with colleagues. You, dearest colleagues, clearly have a part in determining who receives our advertising dollars.”

Hensel also suggests that consumers put direct pressure on companies or approach them via social media, to dissuade them from advertising on “hate publishers” and “destroyers of the future”.

This manifesto was only published on a private blog – one that barely anyone had ever heard of before. But the power of which Hensel boasted – the networks in the advertising agencies and editorial offices – is real. On Hensel’s command, big newspapers and websites reported on the operation with much sympathy, along with the hashtag #NoMoneyForTheRight.

Large companies such as Deutsche Telekom (T-Mobile), BMW, Mercedes-Benz and the supermarket chain REWE obeyed straightaway, and promised to place Breitbart on the blacklist immediately and never to advertise there again. Der Spiegel cited Hensel’s “resistance” (!) and pilloried one business that did not follow suit: A plucky little pizza delivery service that responded to the blacklisting demand by declaring that it was “not the morality police”. The company was denounced by Der Spiegel as “inept”, and after “protests from customers”, it ended up capitulating, as the newspaper reported with much satisfaction.

Breitbart will cope with missing out on a few hundred dollars of advertising revenue from Germany. Hensel, however, was successful in his attempt to motivate his ad agency colleagues against German websites such as the Axis of Good. Within a few days, none of them advertised there anymore. Advertising revenue, equally important for websites as it is for newspapers, came to a halt. Hensel had achieved his goal. 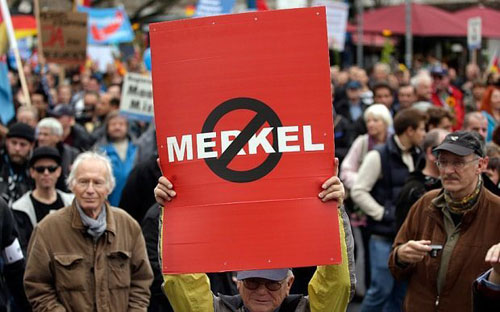 For this campaign, Hensel also received support from the group Network Against Nazis (“Netz gegen Nazis”), which receives financing from by Germany’s federal government, the German Football Association and the newspaper Die Zeit, and which, until recently, also counted Scholz & Friends among its supporters. In the tried and true Orwellian fashion of calling things their opposite, the definition of “Nazi”, for Network Against Nazis, encompasses anyone who is “Islamophobic” or “hostile toward the media”.

Shortly after Hensel’s call for boycotts, the Axis of Good was place on a list of “popular right-wing blogs” by Network Against Nazis – together with the liberal publisher Roland Tichy and the evangelical civil rights activist Vera Lengsfeld (who is a thorn in the side of communists, because she fought against the East Germany’s dictatorship in the 1980s). The Amadeu-Antonio Foundation, which runs the Network Against Nazis’ website, receives almost a million euros per year from the federal government. Not surprisingly, it demonstrates its gratitude with character assassinations of critics of the government.

“The Trend of Denouncing People as Right-Wingers”

Within a short time, Hensel had put together a kind of mafia, bent on economically ruining whoever rejected his ideological commands, by using libel and slander to scare away their customers.

As the Frankfurter Allgemeine daily newspaper commented: “It is very fashionable right now to stigmatize people and denounce them as ‘right-wing’ if they do not share your views. Companies want nothing to do with that label, and, as you can see on Twitter, they quickly change direction if they are aggressively made aware that they support the wrong side with their ads (which are often automatically activated and run on the internet).”

In response to the boycott campaign against it, the Axis of Good showed how a business can defend itself: the editors raised a public alarm about Hensel’s campaign in a series of reports and commentaries. Thousands of readers complained on the Facebook page of Hensel’s employer, Scholz & Friends, which, after its initial support, began to distance itself from its employee’s campaign and finally severed ties with him.

According to Hensel’s version, his campaign was “so successful” that he wanted to take his employer “out of the line of fire”: “My former employer and I became the victims of a massive hate storm consisting of countless of tweets, emails and comments on social media… This is a systematic campaign.”

Propaganda Offensive ahead of the Federal Election

Of course, it was Hensel himself who initiated a systematic campaign, including dirty tricks, which were waged with an eye to the government’s apparent plans to consolidate the population ideologically. As research by the Axis of Good has revealed, Hensel’s boycott operation was closely tied to the plans by the Federal Ministry of Family Affairs to conduct an advertising campaign in support of an open-door immigration policy in 2017. For this, an advertising agency was necessary, as reported in September by an industry journal: “As revealed by a Europe-wide announcement, the Federal Minister of Family Affairs, Senior Citizens, Women and Youth is looking for an agency to advertise the brand ‘Living democracy! Actively against right-wing extremism, violence and inhumanity’.”

Ad agencies were invited to submit their suggestions by the middle of December (2016). The Axis of Good concluded: “There is a suspicion that this [boycott] operation was a hurried pilot project for the bid for the million-euro project by Schwesig’s Family Ministry. A free trial run for the so-called ‘advertising pitch’.”

Regarding the question of how much economic damage was caused to the Axis of Good by the boycott campaign, Henryk M. Broder, the website’s publisher, told Gatestone: “It is significant. After all, it is not the companies themselves that stopped advertising, but the agencies. The damage for Scholz & Friends could be even bigger, but they do not talk about it.”

The Hamburger Abendblatt daily referred to Hensel’s campaign as an “attack on the freedom of the press” adding: “It seems as if the shot from the activists backfired.”

As in communist dictatorships, the more obvious the failings of the government, the more aggressively the establishment attacks those who speak out about them.