An In-Depth Look At The Deep State & Shadow Government (I) 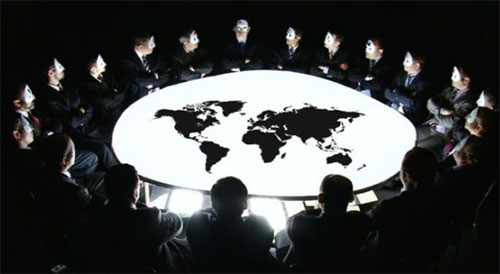 What Do “Shadow Government” and “Deep State” Mean?

The very definition of the shadow government lies within the term itself; it’s the real government entity that hides within the shadows, making all of the important decisions in secret. Their political agenda and true motives are completely hidden from the public. These aren’t the people you see on mainstream media, nor are they the people you vote for; they’re the individuals who lurk in the shadows, which is precisely how they’re able to maintain control over the population, feeding the illusion of democracy.

The term deep state refers to “a state within a state,” a group of people who have so much control inside of a state that they don’t actually have to abide by the same laws, largely because they’re the ones creating them.

The deep state can even include elements of the government, including the Pentagon, which has acted immune to many laws. Up until 2017, for instance, they had never been audited, despite the fact that this is illegal and an astounding $10 trillion in tax payer money had gone completely unaccounted for since 1996.

Numerous politicians have publicly discussed the people who secretly control the U.S. political system, and are creating laws and bending them.

As John F. Hylan, former Mayor of New York City, explained:
“The real menace of our Republic is the invisible government, which like a giant octopus sprawls its slimy legs over our cities, states and nation. The little coterie of powerful international bankers virtually run the United States government for their own selfish purposes. They practically control both parties [and] control the majority of the newspapers and magazines in this country. They use the columns of these papers to club into submission or drive out of office public officials who refuse to do the bidding of the powerful corrupt cliques which compose the invisible government. It operates under cover of a self-created screen [and] seizes our executive officers, legislative bodies, schools, courts, newspapers and every agency created for the public protection.ˮ

Senator Daniel K. Inouye, a high ranking Asian-American politician, has also stated: “There exists a shadowy government with its own Air Force, its own Navy, its own fundraising mechanism, and the ability to pursue its own ideas of the national interest, free from all checks and balances, and free from the law itself.”

Theodore Roosevelt, former President of the United States, stated:
“Political parties exist to secure responsible government and to execute the will of the people. From these great tasks both of the old parties have turned aside. Instead of instruments to promote the general welfare they have become the tools of corrupt interests, which use them impartially to serve their selfish purposes. Behind the ostensible government sits enthroned an invisible government owing no allegiance and acknowledging no responsibility to the people. To destroy this invisible government, to dissolve the unholy alliance between corrupt business and corrupt politics, is the first task of the statesmanship of the day.ˮ

When former President Eisenhower coined the term “Military Industrial Complex,” his main concern was the potential for the “disastrous rise of misplaced power.” 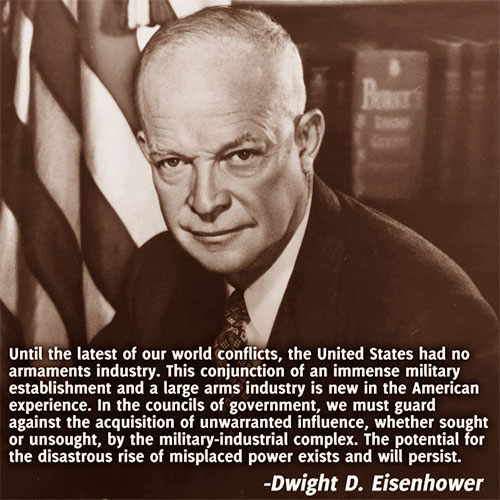 After him, former President John F Kennedy (JFK) warned citizens that they are living in “a system which has conscripted vast human and material resources into the building of a tightly knit, highly efficient machine that combines military, diplomatic, intelligence, economic, scientific and political operations.”

He went on to state that “its preparations are concealed, not published. Its mistakes are buried, not headlined. Its dissenters are silenced, not praised. No expenditure is questioned, no rumour is printed, no secret is revealed.”

Even before both of these two, former U.S. President Woodrow Wilson revealed:
“Since I entered politics, I have chiefly had men’s views confided to me privately. Some of the biggest men in the United States, in the field of commerce and manufacture, are afraid of somebody, are afraid of something. They know that there is a power somewhere so organized, so subtle, so watchful, so interlocked, so complete, so pervasive, that they had better not speak above their breath when they speak in condemnation of it.ˮ

The following video from THRIVE Movement, a documentary created by the heir to Proctor & Gamble, Foster Gamble, perfectly explains how this system works:

Who Is a Part of the Shadow Government and the Deep State?

To begin, the shadow government includes billionaire families like the Rockefellers and the Rothschilds.

The Rothschilds became very wealthy in the 1700s off the banking system, and then spread out all over Europe, gaining more power through other industries. The family also has strategic marital times to big names such as Du Pont, Hilton, and Guinness.

However, the Rothschilds are most well-known for their control over the American Federal Reserve Bank, though they own countless big banks all over the world.

The Rockefellers have their hands in practically every industry, including banking, health, oil, food, and more. Over a century ago, the Carnegie and Rockefeller foundations began to alter university medical curricula to reflect a greater focus on pharmaceuticals so they could increase their profits. They put their money into drug-based research and made that the main focus of modern day healthcare.

Since then, the Rockefellers and banking elite have been able to control and profit from the drug industry. The AMA, the largest association of physicians in the U.S., enforces the drug-treatment paradigm by heavily lobbying Congress and publishing one of the most influential journals, JAMA, which is largely funded by pharmaceutical advertisers.

Mainstream media networks are owned by fewer than five multinational corporations, and all of these corporations have ties to the Rothschild and Rockefeller families.

The Rockefellers were also involved in the creation of the United Nations (UN), which you can read more about in our CE article here. This may not raise red flags to those who aren’t familiar with the Rockefeller family, but consider this: The UN was created in 1945 as a result of World War 2.

In practically every global conflict, something is created out of that conflict to give the illusion that whatever is created will solve it. Have you ever thought that the people who created the conflict are doing those actions so they can propose the solution in order to manipulate the population and gain further power?

George Soros is another key member of the shadow government, disguised as a philanthropic billionaire. His donations seem heartfelt and meaningful, but if you look a little closer, you’ll realize that every donation he makes has an ulterior motive behind it, helping to secure his control over the political landscape and in turn profit from it. 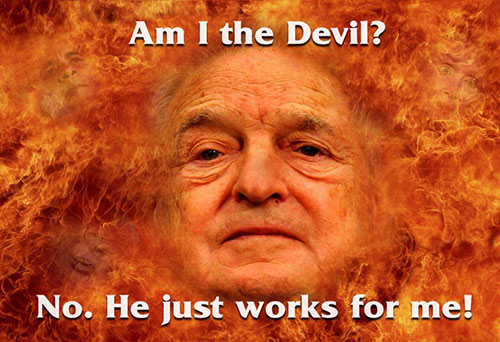 Similar to the Rockefellers and the Rothschilds, he has secured his political control all over the U.S. and in other places like Europe and holds many strategic investments, including in the DNC and in organizations that support the DNC.

Many large corporations fall into the shadow government as well.

SONY is one of these corporations, as the CIA and the government have strong ties to the movie industry. In a statement made last year, Wikileaks wrote: “The Sony Archives show that behind the scenes this is an influential corporation, with ties to the White House (there are almost 100 US government email addresses in the archive), with an ability to impact laws and policies, and with connections to the US military-industrial complex.”

The list of corporations that could be seen as members of the shadow government goes on and on: Exxon Mobil, Monsanto, Big Pharma companies, Corrections Corporations of America, Wall Street (Goldman Sachs, etc.), American Bail Coalition, other big oil corporations, big players in the factory farming industry, and more.

Corporate members of the deep state or the Military Industrial Complex include big military contractors like Lockheed Martin. According to William Hartung, the Director of the Arms and Security Project at the Center for International Policy, contractors will “periodically intervene to try to stop practices that would make them more accountable.”