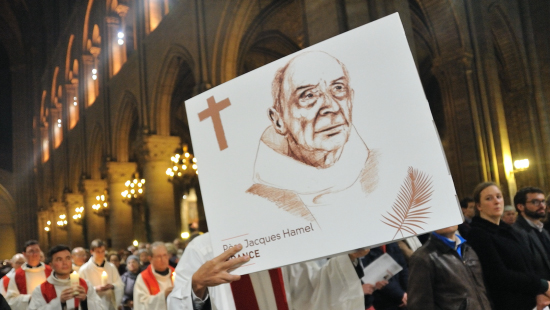 The Observatoire de la Christianophobie said instances of “Christianophobic” attacks in France rose from 273 in 2015 to 376 in 2016, with a significant number happening in December 2016. These include attacks on churches, other places of worship, and threats on social media.

Examples include blasphemous graffiti on the interior of one church and an attack on the figure of Christ at a memorial to Catholics killed in the First World War in the town of Fournes-en-Weppes.

The most notorious anti-Christian attack, however, was the martyrdom of Fr Jacques Hamel at the hands of two Islamists while celebrating Mass at his church in Saint-Etienne-du-Rouvray.

Fr Hamel reportedly shouted “Be gone, Satan!” as the men slit his throat, something Archbishop Dominique Lebrun mentioned in his tribute to him. In a memorial service with members of the Muslim community present, the archbishop explicitly addressed others who may be tempted by extremism.

“You who are tormented by diabolical violence, you who are drawn to kill by a demonic, murderous madness, pray to God to free you from the devil’s grip,” he said. “We pray for you, we pray to Jesus who healed all those who were under the power of evil.”

There is increasing evidence the rise of Islamist violence in France is leading to a cultural reawakening of the country’s Catholic community, long silenced by the Republic’s strict secularism laws.

François Fillon was the surprise victor in the presidential primary of the center-right Republican Party after being endorsed by leading Catholic pressure group Sens Commun.

He has taken the relatively unusual step of speaking openly about his faith, and has said he is “personally opposed” to abortion, although he will not change the law.

Nearly 8,000 Jews left the country in 2015, a number far higher than any other country in Europe, creating one of the largest migrations of Jews since the formation of the state of Israel.