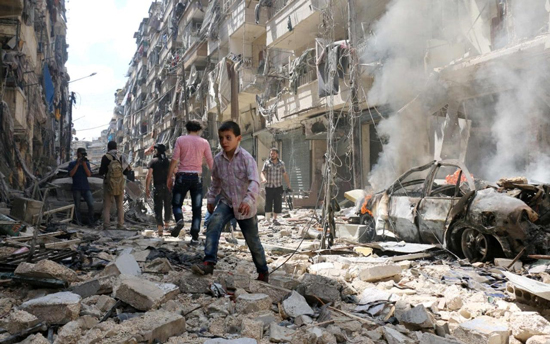 Did the Russian and Syrian armies really engage in the massacre of a civilian population in rebellion against the Syrian government?

This is what the major Western media would have us believe, as it tries to justify, on humanitarian grounds, a direct military intervention by NATO forces, which could lead to further escalation, globally. But is this information “objective” or “unbiased”?

We invite you to view a conference by Canadian independent journalist Eva Bartlett who is able to provide first-hand information to shed light on the real issues of the war in Syria which caused nearly half a million deaths and more than four million refugees.

The independent Canadian journalist became well recognized after a press conference at the United Nations during which she debunked the information provided by the major western media about the war in Syria and the sources on which they rely.

Bartlett, a native of southern Ontario, has visited Palestine, Lebanon and Syria on several occasions; from where she made herself known for her reports and analyses published among others on TeleSur, Global Research, Al-Akhbar, Rabble.ca and on her own blog.

A specialist in Syria, she has been an eyewitness to mortar attacks in Damascus and has been the target of snipers herself. She presented in the conference a summary of what she observed on the spot and the many interviews with street people and victims of hostilities.

Eva Bartlett also became known for her activities as a journalist and human rights activist in the Gaza Strip where she lived a total of three years between 2008 and 2013. She testified about the war crimes and attacks on Gaza perpetrated By the Israeli army while accompanying paramedics and reporting from hospitals.