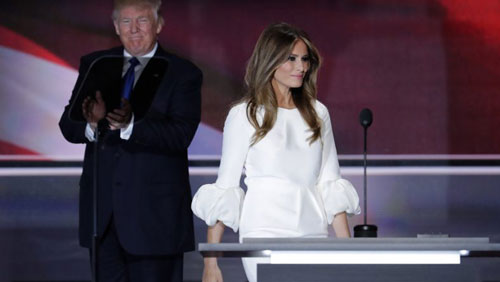 Vaccinate your kids, they say. It’ll be safe, they say.

The only problem is that “they” aren’t vaccinating their children. In the summer of 2016, Melania Trump, the wife of President-elected of the United States, took the stage in grand fashion to endorse her husband’s controversial campaign. Melania has come from a rural town in Slovenia to the brink of being one of the world’s most powerful women. For husband Donald, Melania serves as a puzzle piece that doesn’t seem to fit with liberal rhetoric. Trump’s being painted as a racist and xenophobic and misogynist, something Melania’s presence seems to deny even without her ringing endorsements of him. She’s an immigrant, a woman, a cultural infusion.

Melania serves a purpose beyond being Trump’s wife. Her speech places her squarely as an intricate piece of campaign machinery. On being an American, Melania described it as “the greatest privilege on planet Earth”. She endearingly described her husband as possessing a “never give-up attitude”.

And she certainly didn’t ignore the obvious turmoil present in Trump’s ascension when she said, “There will be good times and hard times and unexpected turns — it would not be a Trump contest without excitement and drama.”

Melania is a philanthropist. She’s a fashion model. She’s a mother. She’s of riches and wealth. And she’s against vaccinations. Melania Trump isn’t trying to pretend that she does vaccinate, like many of the rich and powerful do. In her case, she’s never denied it, even going so far as to attend events which have proposed the link between autism and vaccines. In 2006, Melania gave birth to a son named Barron William Trump, and her and Donald decided against vaccinating him on the CDC’s schedule. While Melania has been much more silent over the matter, Donald hasn’t held back.

“When I was growing up, autism wasn’t really a factor,” Trump said. “And now all of a sudden, it’s an epidemic. Everybody has their theory. My theory, and I study it because I have young children, my theory is the shots. We’re giving these massive injections at one time, and I really think it does something to the children.”

We wonder if Melania has had been fired by any pediatricians for altering the vaccine schedule like so many other parents have? The fact is, the wealthy are either staggering vaccines, dismissing specific vaccines or just completely avoiding them. Melania and Donald aren’t breathing rare air, at least not when it comes to the rich and famous. Justin Timberlake and wife Jessica Biel were recently suspected of avoiding vaccines.

After Trump takes the world’s most powerful seat, Melania will likely be charged with working in the health sector (that’s the normal for First Ladies). That can be school lunches or kids playing more, or it could be vaccines. In her speech, Melania showed a powerful female presence. We heard her roar. What will she roar? That remains to be seen.