Are Laser and Directed Energy Weapons Being Used Against the American People?

DEW (Directed Energy Weapons) are no longer the stuff of conspiracy theory. In the last few months in the US, there have been a number of incidents where DEW, laser weapons and perhaps other high-tech energy weapons have been openly deployed against the American people. 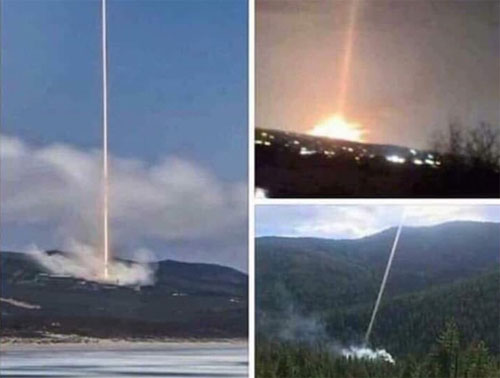 Both the Santa Rosa (2017) and Paradise (2018) so-called “wildfires” in California demonstrate the fingerprints of DEW, with seemingly impossible scenarios of houses, trees, plants and even mailboxes neatly left intact while adjacent houses and fences are completely razed to the ground.

Unsurprisingly to those following the crimes of the NWO (New World Order), the deployment of these weapons is tied to the deeply sinister UN Agenda 2030. 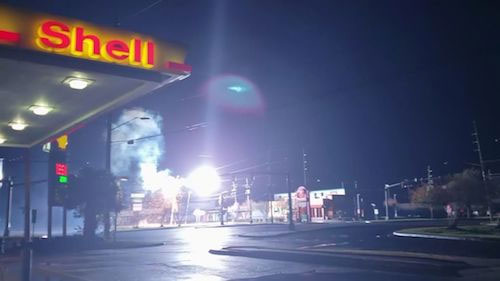 Still from a video (below): it shows a beam of light apparently setting buildings on fire in Kenner, Louisiana.

One reason the NWO manipulators can get away with their crimes against humanity is that most people are downright ignorant of the true state of technology, whether it’s mind control tech, HAARP/ ionospheric heaters/ Space Fence, 5G or anything else.

Dr. Judy Wood was one of the first people to gain notoriety in talking about DEW, when she put forth her excellent and well-founded theory of the dustification of the twin towers in the 9/11 false flag operation.

Wood pointed out the inexplicable lack of solid matter (concrete, steel, other metal, etc.) that should have been found in abundance on the streets on New York below the WTC but which was nowhere to be found. Where did it go? It was turned to dust.

Researcher Jamie Lee who runs Tabu and APlaneTruth.info has recently had his main YouTube channel censored (surprise, surprise), however he is starting a backup channel.

He had many videos up exposing DEW in relation to the Paradise fires, including a video which revealed existing laser technology which “dustifies” metal and easily removes rust from it (while sparing the wood beneath it).

The giveaway clue that DEW was used in Santa Rosa and Paradise is the way that specific homes were burnt along property lines. Some houses were untouched with fresh produce out front, or orange trees in the backyard, next to houses which were razed to the ground.

These “wildfires” left mailboxes, plants, front yards, back yards, eucalyptus trees and other highly flammable things untouched, while somehow neatly and perfectly targeted particular houses, neighborhoods and areas. Are these the most selective “wildfires” in American history?

How can one house burn to the ground while each house on either side remained completely intact? Wildfires obviously don’t do this. Some people were, horribly, killed in their cars. There were reports that as many as 50,000 went missing or died!

Take a look at the images below: 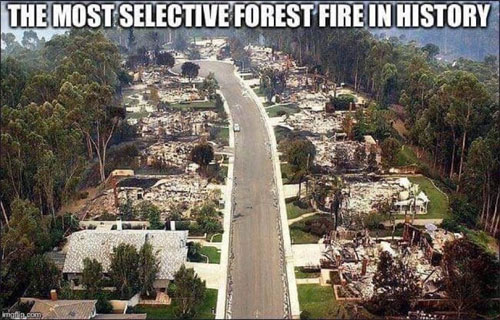 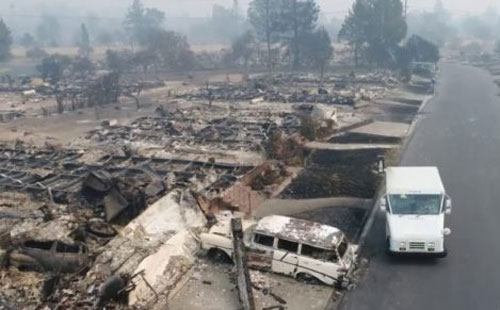 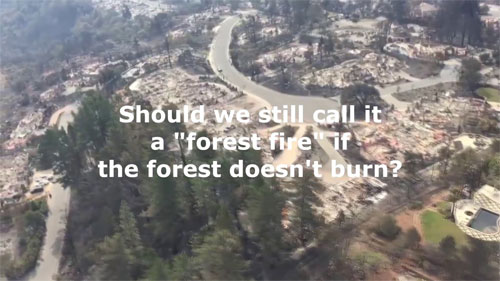 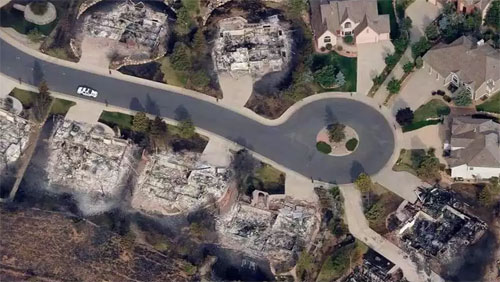 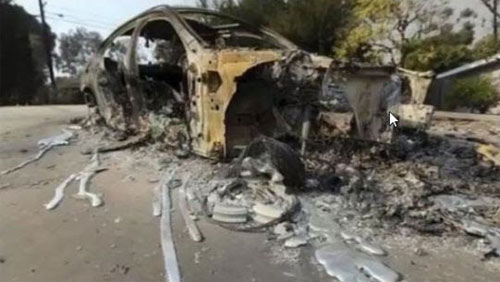 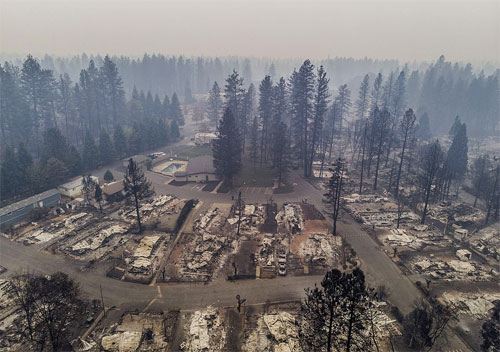 Agenda 2030 (formerly Agenda 21) is the UN agenda to centralize governing power in a One World Government by taking it away from the autonomous nations states of the world.

In California, city officials are suggesting not to rebuild in burnt areas because the area is too fireprone, all the while prohibiting the people from practicing good forest stewardship.

(Some have suggested that the “wildfires” went right through an area where an Agenda 2030 high-speed rail is planned to be built, although that may or may not be the case.)

This appears to be a massive land grab. The plan is open spaces for the rulers and stack-and-pack micro apartments for the masses. Yes, it’s important to care for the environment, but the green movement has been hijacked.

There is an ulterior motive to granting rights to inanimate objects like rocks and rivers, a trend which is happening worldwide since it is part of the NWO agenda as implemented via the UN.

See it happening in New Zealand, India and Ecuador. By granting human-like rights to non-humans, the NWO conspirators plan to thwart the decentralized sovereignty of the people, kick them off the land and force them into human habitat megalopolises.

Meanwhile, 2 incidents in Louisiana and New York respectively at the end of December 2018 may lead you to wonder what other kinds of exotic laser weapons the government possesses and deploys against its own people.

In Kenner (a small town in Louisiana), massive beams of blue light shot from the sky to set on fire and destroy buildings below! See the video

UFOs can be seen too. Are the UFOs causing the destruction or harvesting energy from it? Was it DEW? “Finger of God” plasma rays? Government or alien op? You decide. It’s out-of-this-world footage and usually something one only sees in science fiction films.

In New York, there was a similar but not quite the same event with blue light. In the district of Queens, something turned the sky a weird blue color which emanated across the entire city.

Officials say it was due to a transformer explosion at an electrical substation, which also caused local outages and grounded flights at LaGuardia Airport.

However, as this footage shows, there is much more to the story. See video proof of at least 1 UFO fleeing the area:

What was really going on here?

As the corrupt J. Edgar Hoover once said, the average person is handicapped when coming face to face with a conspiracy so monstrous he cannot believe it exists.
Although he said that in regard to communism, the idea has a deeper meaning. The ordinary person finds it hard to detect it when DEW are openly used. They just believe it when the MSM says “wildfire.”

However, it is an open fact that the US Government has a long history of experimenting upon its own people, e.g. the 1930s Tuskegee syphilis experiments, the 1940s Guatemalan experiments and the 1960s CIA LSD experiments.

With these recent fires in Paradise, California, the evil has sunk to new depths. There is abundant evidence the government used DEW to decimate the area, selectively destroy targets (while leaving other adjacent buildings and even forests intact) and commit mass murder.