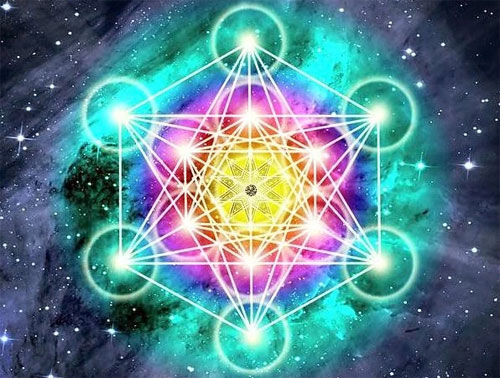 In continuing the mathematical analysis of the text the fifth and six days of creation have a total of 206-words, one word less than found in the Gemetria Value of Light. When the count of words is continued to the end of the fourth chapter of Genesis it is found that there are a total of 1449-words divided by 69 a quotient of 21 is obtained. There are 22-minor chakras in the Hindu chakra system. The 22nd group of 69 is found in the first chapter of Genesis: there are 69-groups of words held together by 80-hyphen: these 69-groups of words totals to 142-words. The 1449-words in the first four chapters of Genesis can also be divided by 207 giving a quotient of 7 Light Chakras. This demonstrates that the first four days of creation represents but one Light Chakra.

If it is doubted that the Hindu symbol of the Kundalini and its Chakra system has anything to do with the Judeao Christian scriptures then the reader should view the West Façade of Chartres Cathedral. There the Mystical Body of Christ depicts the same pattern as that of the Hindu Chakra system.

7. The universal mathematical matrix, the flower of life and the Vesica Pisces

It behooves me to point out that the Judeao Christian scriptures are not the original source material that inspired their writings. The Universal Mathematical Matrix makes that claim. I developed this matrix from out of the MONAD as a commentary on it. It should be pointed out that since I claim to have discovered this matrix on my own volition, without researching it or knowing anything about it, this demonstrates that any culture in any time or clime can envisage it and start religion all over again. This matrix is the source of all religions on earth: bar none.

In analyzing it I discovered that it was used in writing the Judeao Christian scriptures, Dante’s La Divina Commedia and great deal of Christian art. Initially, it doesn’t look like much. Above I have presented a group of patterns developed from out of this matrix and a few of those patterns were esoterically codified to the first chapter of Genesis; thus, it can be seen why this matrix is the original sources for the writing of the Judeao Christian scriptures. I have also placed image of the Flower of Life so that the reader can visualize the cube embossed in its makeup. Only three sides of the cube can be seen: the top and the two front sides. It is especially important to visualize the top. I see both these symbols as having a symbiosis: they are in fact the same symbol expressed two different ways.

In placing these two images side by side I want to illustrate that the Universal Mathematical Matrix is but one side of the six sided cube that is the Flower of Life in a three dimensional form. Both these images go out to infinity in every direction, which posits them as the same symbol. As it can be seen the red and blue circles represent the Vesica Piscis and if the reader has studied the matrix above with the Kabbalistic Tree of Life it can be visualized that the Tree of Life is a representation of the two circles forming the Vesica Piscis.

The pedals in the Flower of Life are the numbers in the matrix. Note that the numbers not representing pedals represent the fixed signs of the Zodiac and are the reason the first letter of the bible is BETH. There are 18-numbers represented by the 2, 5 and 8. This matrix was originally a 9 x 9 matrix: Kamea of the Moon (18 / 81 = 0.22222222…): PEI and BETH. This goes to the heart of the Genesis Creation Account.

Last but not least, I want to state unequivocally, that I could not have envisaged what the Hebrew texts or its coder was conveying without Sacred Geometry. Sacred Geometry is one of the lost keys to reading the sacred scriptures. Modernity diminishes the sacred sciences, specializing in them through different disciplines, separating them when in fact they should be seamlessly merged as one.

Are Laser and Directed Energy Weapons Being Used Against the American People?