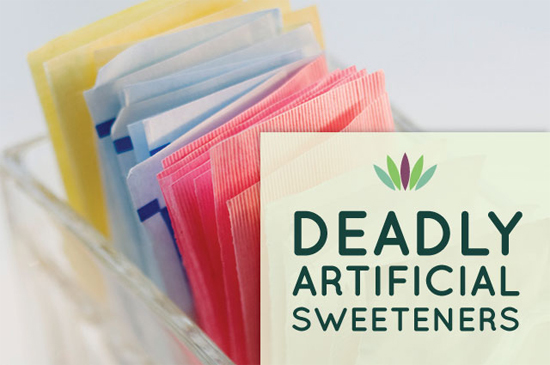 Artificial sweeteners are promoted as a healthy way to cut down on sugar and lose weight. Common sweeteners such as aspartame, saccharin, and sucralose are used in “diet” products as a way to market toward those who wish to cut down on calories. However, new research is showing us that these artificial sugar substitutes are not as healthy as big food brands would like us to believe. According to new research from the Canadian Medical Association Journal, they are actually linked to weight gain, not loss.

“Consumption of nonnutritive sweeteners was associated with increases in weight and waist circumference, and higher incidence of obesity, hypertension, metabolic syndrome, type 2 diabetes and cardiovascular events.” – Meghan B. Azad, PhD

The study was conducted by a group of scientists from the University of Manitoba, Canada. After reviewing 37 studies which analyzed more than 400,000 people over a span of ten years, they found that consumption of artificial sweeteners increases the likelihood of developing high blood pressure, heart disease, obesity and diabetes.

The research methodology was developed by an information specialist and peer-reviewed to overcome previous pitfalls that studies like this have had in the past. Language restrictions were removed by translation in order to work with a full database of information regarding nonnutritive sweeteners. Studies involving children 12 years or younger were reviewed separately from adults, and a minimum study duration of six months was imposed in order to ensure quality and credibility of the study.

Strengths of the systematic review include use of a registered protocol and sensitive, peer-reviewed search strategy. The researchers synthesized evidence from both RCTs (Randomized Controlled Trials) and observational studies, assessed multiple cardiometabolic outcomes and focused on long-term effects.

Scientists have been suggesting for years that artificial sweeteners may have an adverse effect on gut microbiota, glucose metabolism, and appetite control. Animal studies have found that frequent exposure to artificial sweeteners can lead to increased food consumption, and in turn, weight gain. This is especially concerning considering in 2008 nearly one in three Americans reported a daily intake of artificial sweeteners and that number has been steadily increasing.

“The results showed a statistically significant association between consumption of artificial sweeteners and higher risks of diabetes and heart disease, as well as increased weight gain.” – Dr. Meghan Azad

Naturally, big food companies which profit from selling “diet” and “reduced sugar” products are not happy that research is coming out which discredits their products. They claim that because the FDA has approved them it means they are safe. On the contrary, the FDA consistently approves products which end up harming the consumer, such as fluoridated water, glyphosate-based herbicides, and a whole plethora of dangerous pharmaceutical drugs.

Gavin Partington, a big food advocate and Director of the British Soft Drinks Association, argues against studies which contradict the old view that artificial sweeteners are a healthy way to lower weight, while ignoring the hard data that this study provides.

“These claims, from the University of Manitoba, run contrary to the substantial body of scientific research which shows how low-calorie sweeteners can help people to reduce their calorie intake and manage their weight.” – Gavin Partington

In retrospect, research which discredits the bottom line of a powerful industry takes a while to be recognized and believed. However, just like in the past with PCBs (Polychlorinated Biphenyls), cigarettes, and DDT (Dichlorodiphenytrichloroethane), research suggests that artificial sweeteners will soon be added to the list of products that people will soon regret ever purchasing. If you want to stay healthy, the safest thing to do is generally to stay away from the artificial and get closer to natural, holistic ways of living.