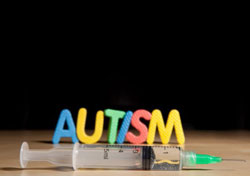 The debate over whether or not vaccines cause autism is far from over, with a new study recently presented at the International Meeting for Autism Research (IMFAR) in London, England, destroying the popular claim that any link between the two has been thoroughly debunked by science. Research conducted on baby macaque monkeys revealed that the typical U.S. Centers for Disease Control and Prevention (CDC) vaccine schedule indeed triggered autism symptoms in the vaccinated monkeys, while none of the unvaccinated monkeys developed the disorder.

Researchers from the University of Pittsburgh in Pennsylvania evaluated the typical CDC vaccine schedule on the infant monkeys, which were given the standard vaccine regimen as it was recommended by the government for human infants during the 1990s. They then looked at the health outcomes of these infant monkeys compared to other infant monkeys not given the vaccines ‒macaques share about 93.5 percent of the DNA found in the human genome, by the way, which makes them an appropriate comparison for evaluation.

According to details of the study relayed by SafeMinds, a public safety group working to expose the truth about the connection between vaccines and autism, the vaccinated macaques experienced increased brain growth following the jabs, a hallmark in vaccinated human babies who later develop autism. The vaccinated monkeys also experienced noticeable alterations in brain development compared to their unvaccinated counterparts, demonstrating clear signs of the type of impairment that is characteristic of autistic children.

“The vaccinated primates… showed a different rate of maturation of the amygdala section of the brain than the non-vaccinated monkeys,” explains SafeMinds. “Amygdala dysfunction has been long implicated in autism. The amygdala region is responsible for emotions, memory and learning. Individuals with autism often struggle in these areas.” 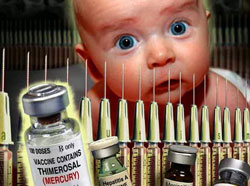 “Since the mid-1980s, many vaccines have been added to the schedule,” explains a history of vaccine schedules published by the Children’s Hospital of Philadelphia. “Now, children could receive as many as 24 shots by 2 years of age and five shots in a single visit. The result is that the vaccine schedule has become much more complicated than it once was, and children are receiving far more shots than before.”

As far as the link between vaccines and autism, SafeMinds is working toward passing legislation to completely ban all mercury in vaccines, including in flu shots now given to both children and adults, including pregnant women. Based on a cohort of published research on mercury and its many dangers as a recognized neurotoxin, there is no reason why this noxious chemical substance should ever be injected into the developing body of a young child.

“This research underscores the critical need for more investigation into immunizations, mercury, and the alterations seen in autistic children,” said Lyn Redwood, Director of SafeMinds. “SafeMinds calls for large scale, unbiased studies that look at autism medical conditions and the effects of vaccines given as a regimen.”

14 Simple Ways To Get Ready For Winter