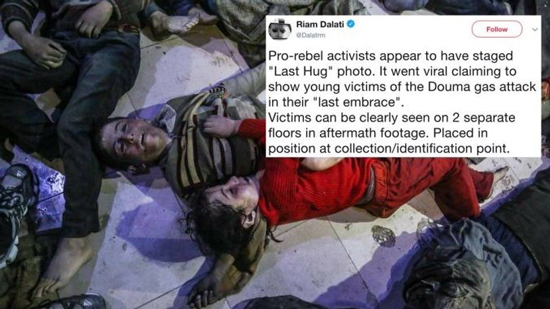 A BBC journalist claims the chemical attack in Syria this week (April 7) was “staged” by Western forces, in order to justify an illegal invasion of the country.
According to BBC Foreign News Producer Riam Dalati, the U.S. and UK are blaming Bashar al Assad for the attack with zero evidence. He tweeted that he was tired of “staged” scenes.

“Sick and tired of activists and rebels using corpses of dead children to stage emotive scenes for Western consumption. Then they wonder why some serious journos are questioning part of the narrative”, Dalati tweeted.
Rt.com reports: “He later deleted that tweet, but not before others in the Twittersphere managed to grab a screenshot of it.” 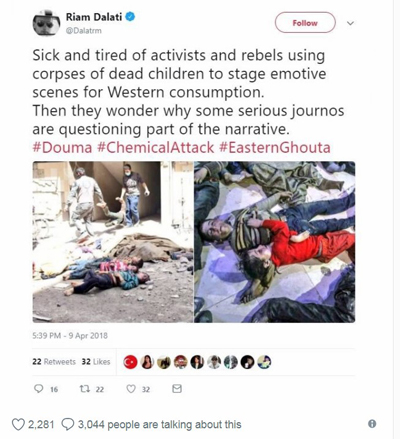 It didn’t take long for people on Twitter to speculate as to why Dalati would have deleted the tweet, suggesting the BBC forced him to do so.
When a Twitter user wrote that Dalati was under pressure from the BBC to “toe the line”, presumably by pointing the finger at Syrian President Bashar Assad, the journalist said this wasn’t true, and that he deleted the tweet due to a “breach of editorial policy”.

“Not so… original tweet correctly deemed in breach of editorial policy thru (sic) use of sick/tired” and by not providing context for a picture of a deceased Syrian girl who appeared to be giving a “last hug” to another child who appeared to have died.
“Still stand by original opinion that ‘Last Hug’ was staged and can voice that in a factual tweet if I want to”, he wrote.

Dalati isn’t the first mainstream media journalist to speak out against the common narrative against the Assad government. Fox News’ Tucker Carlson did the same this week, slamming those who believe they know what actually happened on the ground in Syria. “All the geniuses tell us that Assad killed those children, but do they really know that? Of course they don’t really know that. They’re making it up. They have no real idea what happened”, Carlson said.

Meanwhile, British Prime Minister Theresa May has held phone calls with her counterparts in the US and France to determine the next steps that should be taken regarding the alleged chemical attack in the Damascus suburb of Douma on Saturday, April 7. While US President Donald Trump is considering possible military action in Syria, a Wednesday (April 11) report from The Times stated that May is more hesitant about taking action and is seeking more evidence that Damascus was behind the reported attack before acting.

Both Syria and Russia have called for an on-the-ground investigation, with Moscow proposing the creation of an independent investigative mechanism for the alleged attack in Douma. The Organization for the Prohibition of Chemical Weapons has said it will be sending investigators to the area.

The Russian military has stated that it found no trace of chemical weapons at the alleged attack site, and accused the rebel-linked White Helmets of distributing “fake news”. On Tuesday (April 10), Russia’s permanent representative to the UN, Vassily Nebenzia, said that reports of the alleged attack were the work of “White Helmets provocateurs” while also warning the US and its allies against launching an “illegal military endeavor”.