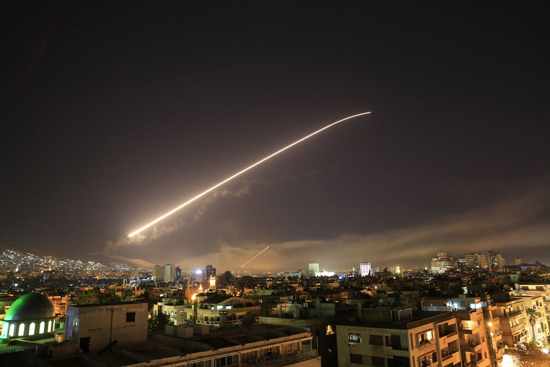 The Damascus sky lights up with missile fire as the US launches an attack on Syria targeting different parts of the capital on April 14, 2018

The Russian foreign ministry has warned the United States against using military force in response to “fake news” regarding the recent chemical attack in Syria’s eastern Ghouta.

The Russian foreign ministry said in a statement on Sunday, April 8, that reports of the alleged chemical attack are based on testimonies from the Syrian Civil Defense or White Helmets and so-called rights organizations which are manipulated by Britain and the United States who have been previously caught collaborating with terrorists.

The statement warned that any foreign military intervention under fabricated pretexts in Syria, where at the request of the lawful government there are Russian military personnel, is absolutely unacceptable and can lead to the most serious consequences.

“The news of the use of chemical weapons in Douma came at a time when the Syrian army continues its combat operations in eastern Ghouta in order to liberate its population from insurgents and terrorists” the foreign ministry said, adding that extremists use civilians as human shields.

According to the statement, “those who do not want to see one of the terrorists last strongholds in the Syrian territories destroyed and do not seek a genuine political settlement try by all means to escalate the situation and obstruct the process of evacuating civilians from the region”.

On Sunday, April 8, US President Donald Trump promised that the Syrian regime of President Bashar al Assad will pay a heavy price for the chemical attack that killed many people, including women and children, in the city of Douma.
The US president also said Russia and Iran are responsible for the massacre by supporting the head of the Syrian regime.

On Saturday evening, April 7, the rebel held town of Ghouta near Damascus was hit by airstrikes that killed at least 50 civilians, including dozens of children and women. Reports from the town said patients were rushed to hospitals with symptoms similar to those resulting from chlorine barrel bombs.