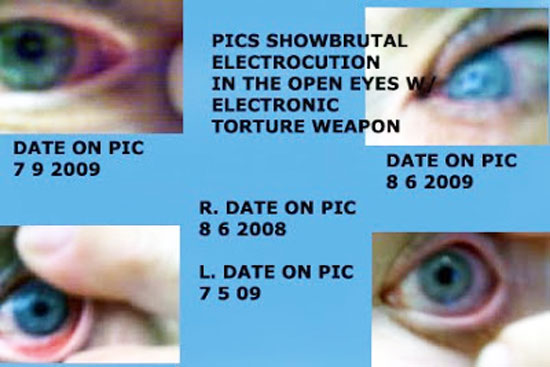 “Bio-electromagnetic weapons are a weapon system that operates at the speed of light, that can kill, torture, enslave and escape detection” – Harlan Girard, former Managing Director of the International Committee on Offensive Microwave Weapons, Philadelphia, Pennsylvania.

Electromagnetic weapons operate at the speed of light; they can kill, torture and enslave; but the public are largely unaware that they exist, because these weapons operate by stealth and leave no physical evidence. Electromagnetic weapons have been tested on human beings since 1976. By widely dispersing the involuntary human test-subjects, and vehemently attacking their credibility, it has been possible for the United States to proceed with these human experiments unhindered by discussions or criticisms, let alone opposition.

This ultimate weapon system is currently being deployed in Iraq. The US Air Force and the Marine Corps refer to it as “active denial technology”, as if it were used purely for defense, but it is not.

The truth about “active denial technology”

There is only one electromagnetic spectrum. Nuclear weapons release a great deal of ionizing radiation in the high frequency range above visible light, where the energy of the radiation is capable of breaking chemical bonds. Ionizing radiation is generally acknowledged to cause cancer.

The US military has weaponized the non-ionizing radiation below the visible range, the microwaves and radio waves that are used in mobile phones and telecommunications. The US government has strenuously denied that there could be health hazards from non-ionizing electromagnetic radiation, both as a defense of the involuntary human research it has been conducting for many years but has not yet acknowledged, and to dissuade other countries from developing similar weapons.

The only biological effect of non-ionizing radiation that the US government has acknowledged for many years is heating, and accordingly, it characterizes “active denial technology” as that which produces pain from sudden heating of the skin; but this is not how it really works.

In 1959, Saul B. Sells, a professor of social psychology at a minor US university submitted a proposal to the Central Intelligence Agency (CIA) to build for them the most sophisticated electroencephalography machine that would have an integral computational capacity to analyze and, hopefully, make sense of the brain waves it recorded. In other words, the professor proposed to make a machine that could tell the CIA what a person was thinking, whether or not the person wished to disclose that information.

The CIA approved the project in 1960, adding some library research with five objectives. The fifth objective of the research was “Techniques for Activating the Human Organism by Remote Electronic Means”. The entire assignment was thereafter known as MK-ULTRA subproject 119, MK-ULTRA being the CIA’s notorious mind control program. It was based on the erroneous notion that the Soviets already possessed the means to control minds and the US had to catch up as rapidly as possible.

The documents pertaining to MK-ULTRA subproject 119 are now held in the US National Security Archives (a non-governmental organization) at George Washington University in Washington, D.C.
John Marks, author of The Search for the Manchurian Candidate: The CIA and Mind Control, (Times Books, New York, 1979) donated the MK-ULTRA documents; his book was republished by W.W. Norton & Company, Inc., New York, 1991 and is still in print.

Project Bizarre followed MK-ULTRA subproject 119 in 1965. The purpose of Bizarre was to record and analyze the complex microwave signal allegedly being beamed at the American Embassy in Moscow by the Soviets from a building across the street. The interesting thing about Project Bizarre is that while the United States has denied to this very day that there could be adverse health effects from microwave radiation, it immediately suspected that “the Moscow signal” was producing a variety of health effects in Embassy personnel, particularly in the successive ambassadors at whose office it was claimed the signal was being beamed. At the same time that the State Department was testing embassy personnel for DNA breaks produced by the Moscow signal, it felt constrained from complaining to the Soviets because the power of their signal was a tiny fraction of what the US said was a safe, human exposure level. Journalist Barton Reppert has written the most authoritative account of the Moscow signal. (Note: DNA breaks from exposure to mobile phones have been confirmed in recent lab research published in Science in Society.)

In 1973, Joseph C. Sharp, an experimental psychologist at Walter Reed Army Institute of Research performed an experiment that was pivotal to the development of the torture equipment being shipped to Iraq today. He had James Lin set up equipment in his laboratory which converted the shape of sound waves into microwave radiation that enabled him to hear himself vocalize the names of the numbers from one to ten in his head, by-passing the mechanism of his own ears. This particular experiment was never published but is mentioned in Lin’s book, Microwave Auditory Effects and Applications, published in 1978.

The experiment has been confirmed in US Patent 6587729, “Apparatus for Audibly Communicating Speech Using the Radio Frequency Hearing Effect”. This patent is for an improved version of the apparatus used in the 1973 laboratory experiment, issued on July 1, 2003 and assigned to the Secretary of the Air Force. It provides scientific evidence that it is possible to hear threatening voices in one’s head without suffering from paranoid schizophrenia.

Why has this patent been published openly at a time when the US Government is practicing a degree of secrecy that rivals Stalin’s Kremlin? There is no satisfactory answer, except to say that the apparatus in the patent has already been superseded by equipment that achieves the same effect by far more sophisticated means. It blocks the normal processes of memory and thought by remote electronic means, while at the same time supplying false, distorted and/or unpleasant memories and suggestions by means of a process called “synthetic telepathy”. The equipment that produces synthetic telepathy is sometimes referred to as “influence technology”.

While voices and visions, daydreams and nightmares are the most astonishing manifestations of this weapon system, it is also capable of crippling the human subject by limiting his/her normal range of movement, causing acute pain the equivalent of major organ failure or even death, and interfering with normal functioning of any of the human senses. In other words, any of the tortures with which the words Guantanamo Bay have become synonymous can be achieved by remote, electronic means. 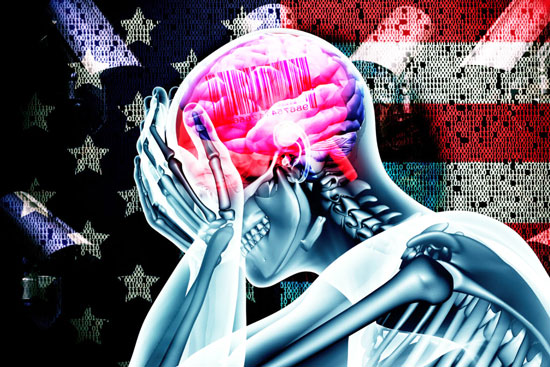 Influence technology is also capable of persuading the subjects that their mind is being read, that their intellectual property is being plundered, and can even motivate suicide or the murder of family, friends, and co-workers. During the years of the so-called “War on Drugs” (which preceded the “War on Terrorism”), letters that the involuntary human subjects had written or were about to receive regularly vanished from the mail, as though the government had a huge covert operation through post offices across the country. When George Herbert Walker Bush became president (in 1989), the incidence of co-worker killings in the post offices became so great that the expression “going postal” began to replace the commonly used expression of “going crazy”. The killing of co-workers in other workplaces began to command more media attention too.

The estimate cost of imprisoning a human being in his/her own body and applying unremitting torture is US $5,000,000 to $10,000,000 a year.
By “unremitting torture” it is meant exactly that. Because there is no visible evidence left by this new torture equipment such as damage to the skin, it is possible to torture the involuntary human subjects for 24 hours a day, 365 days a year. This can be done, and is being done, even on Christmas and Easter.

The estimate cost of testing/using electromagnetic weapons on a human subject has been done by visiting a cable TV channel that specializes in the sale of goods over the air 24 hours a day. For the estimation, the number of technical staff required, their working hours and salary range were taken in consideration; also the number of back-up personnel required to prepare the programming for broadcast. Moreover, there is the cost of electronics and the schedule by which it is depreciated. A cost was estimated for depreciation that is included in the final estimate of the cost of torturing one involuntary human subject for one year.

Torture is a labor-intensive business. What objective would justify this investment? Could it be something as insane as to rule the world by enslaving the democratic governments of the more populous countries? This objective is certainly consistent with the United States’ disdain for, and hostility toward, the United Nations, the international conventions and covenants it has ratified in the past and customary international law.

On March 1, 2001, the Marine Corps announced a new non-lethal weapon, “active denial technology”. It produces enormous pain by allegedly boiling the molecules of water in the human skin without damaging the skin itself. As described in an article published in New Scientist, it employs pulsed electromagnetic radiation at a frequency of 95 GHz with a range of about 600 meters. There have been several new reports in the magazine in 2005, including one published in July, describing volunteers taking part in tests to determine how safe the Active Denial System (ADS) weapon would be if used in real crowd-control. The ADS weapon’s beam was reported to cause pain within 2 to 3 seconds, and becomes “intolerable after less than 5 seconds”.

And then there is the case of Russia, where the involuntary, human subjects of torture experiments appear to be both numerous and well organized. There is information that every Russian scientist who could speak English has now found a home in an American university or government laboratory. This is plausible, considering the frequently voiced American worry that Soviet era experts in nuclear weaponry and biological warfare might find employment in Iran. It is a fact that at the end of World War II the US Army swept through Germany in an operation called Project Paperclip, recruiting, in particular, Nazi rocket scientists and experts in aerospace medicine. Some other scientists were recruited simply to deprive the Soviet Union of this resource. So what has become of the Soviet scientists who didn’t speak English? In time we will find out for certain, but for now it is a safe guess that at least some of them have been employed to study the Russian value system and decision making processes by torturing other Russians with American “influence technology”.

Two interesting and important articles on bio electromagnetic weapons have recently appeared in the New Scientist: one is titled Maximum pain is aim of new U.S. weapon and the other Police toy with ‘less lethal’ weapons, both written by David Hambling. See also US Patent 6536440 of March 25, 2003.

Since this article first appeared, in mid-June 2005, it has come to attention that the Israelis are deploying a device called “The Scream”, which sends out bursts of audible, but not loud sound at intervals of about 10 seconds. A photographer at the scene of a demonstration said that he continued to hear the sound ringing in his head even after he covered his ears. This suggests that the active agent is electromagnetic rather than acoustic. In other words, the Israelis have come up with a device that is far cleverer than US “active denial technology”. It not only deters rioters, but also issues an audible warning that it has been turned on, which the US device does not, leaving it entirely to the enlisted men operating it to determine how much burning pain their adversaries receive. The margin for error with the US device is unconscionable. It may as well be called a lethal weapon because in practice it very frequently will be.